Usually a “lazy portfolio” refers to investing in two or three well-diversified index funds. You can be very diversified if you invested in VTI (Vanguard Total Market), VEU (Vanguard Ex-US), and BND (Vanguard Total Bond Market). You could divide it up 30-30-40 and never touch it again (though you should continue to try to add new money to the investment). Historically, that’s been a very safe and profitable strategy.

However, since I’m Lazy Man, my “Lazy Portfolio” is a little different. It’s actually not so lazy at all. I enjoying picking satellite stocks. So while I may recommend people go with the traditional lazy portfolio because it’s easy, I don’t take my own advice.

1. I’m doing well with my satellite stocks. Here’s what my actively managed portfolio performance looks like:

2. I don’t have many hobbies, but one of them is following the markets and seeing if I can make a percentage extra or two.

3. I have significant protection with my core holdings. I’m only managing retirement money, so I don’t have to worry about tax consequences. My wife has more retirement money in her government TSP which has a lazy portfolio allocation. She has a government pension providing long-term income security. We have investment properties that can provide us with income in the future. The satellite stocks in general make up a small amount of our overall portfolio.

Today, I thought I’d pull back the curtain and explain what my investments are and how they got that way. I think you’ll find that it is far from a perfect portfolio.

What’s in My Lazy Portfolio? 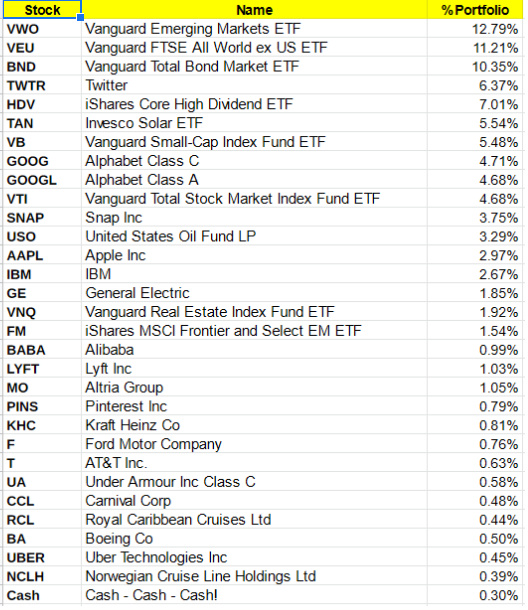 This mess of stocks and ETF doesn’t make much sense at the first glance. I have a lot of explaining to do. So here goes:

The only reason why I have more in emerging markets than VEU (see below) is that it has performed worse and I feel there’s more opportunity for growth in those markets in the long-term. This is a long-term position, so I’m not too worried about COVID hitting those countries hard, right now.

Whenever market indicators point towards a stock market crash, I increase the amount of money I have in bonds. I usually keep less than 5% of my portfolio in this, because I’ve got time and other safety nets. However, I’ve been selling off the indexes as they reach new highs and adding more bonds.

I did this strategy in early 2020 and when the markets crashed with COVID, I was able to sell bonds (which didn’t drop as much) and buy stocks at nearly half the price they are today. I know that I can’t call the bottom, so every time the stock market dropped about 10%, I would sell another 2% of bonds and buy-in.

I invested in Twitter a long time ago, with most of the shares around $15. I sold some at $40, $45, $50, $60, and $75. Even though I keep selling shares, the overall value has grown, so it’s still a large percentage of my portfolio. Perhaps I should have sold off more, but I think it’s still undervalued.

This forms part of my core United States index holdings. I like high dividend ETFs for three reasons:

1. They produce solid income. HDV has about a 3% yield right now.
2. They are typically more boring companies that earn good cash and profits which I feel protects me in most market crashes.
3. They help me remove tech risk from my portfolio. As you’ll see with this list of stocks, I’ve got a lot of technology and the market indexes have plenty of tech at the top as well.

I bought this years ago when I got solar panels on my house. The last year has seen solar stocks skyrocket. I could have sold some off and redistributed the money across broader indexes, but I don’t mind holding solar stocks for another 20, 30, or 40 years (if I’m still around that long).

Most of the big indexes (VTI, I’m looking at you) strongly favor big companies. However, over the long haul, smaller companies tend to perform better. This is a way to give me a little more diversity and better performance than if I had just bought VTI alone. My overall US stocks are still mostly large-cap, so an argument could be made that I should increase this allocation.

I bought Google a long time ago and it split into two voter classes. These never differ by much and it’s about 9.5% of my portfolio which would bump it up the list towards the top.

I decided not to touch it and it has performed well. Investing in Google is almost like investing in the entire internet and smartphone markets. It almost feels like its own index fund.

Finally, the staple of most lazy portfolios shows up. I used to have a lot more in this, but I sold a lot and put in HDV (see above). If you were to combine my VTI, HDV, and VB holdings, that’s 17% of my portfolio in US indexes.

I bought at lot SNAP at under $10. Much like Twitter, even though sold off more than half, it is still a significant holding. Whenever SNAP and Twitter reach new highs, I sell off about 5% or 10%. At this point, I’m playing with the house’s money.

I had been buying this oil ETF for far too long. I lost a ton of money when COVID hit and the price of oil went negative. However, I continued to dollar cost average into it. About a month ago, I sold off half since it I was finally solidly in the profitable area. I am holding to the rest with the idea that vaccines will spur a lot of pent-up demand for travel.

Over the long-term, I’d rather not invest in the oil industry.

I bought some of these several years ago and sold off enough to just play with the house’s money. It’s split once or twice as the company became the first in the US to hit 1T and 2T in market cap.

There’s really no need for me to keep this since it’s well represented in the indexes. It feels like a safe holding though.

I bought this because I thought that Watson would revolutionize the world. It didn’t happen, but IBM has paid out 5% dividends (or more) for years that I’ve held it. In theory, if I put my entirely portfolio in this stock, I could live off the dividends as it would be higher than the 4% rule

I bought this years ago because I thought it was cheap after it had followed it a lot. Then it fell more and more. I bought more and more, dollar cost averaging in, and I’m up about 30% at this point. I have sold some since I’m up. I would sell more, but the pandemic hit their businesses harder than many companies. I’m hopeful that when things fully open up, this stock will out-perform.

I like to diversify with some real estate holdings. This pays a decent dividend of 3.88% as well.

Yes, 1.5% of my money is in frontier markets. These are countries like Kuwait, Vietnam, Morocco, Kenya, Romania, and Nigeria.

It has not performed well. I’m down about 5.71%. This is a very, very long-term growth investment. It also diversifies my holdings so that I’m invested in probably 100 countries.

There was one day (around 2015 or so) when the stock market dropped a bunch for just about 10 minutes. I had a little liquid money and saw that Alibaba dropped more than most. I don’t mind having 1% of my money in “the Amazon of China.”

When Lyft dropped to being worth about $8 billion dollars I thought that Google (or another company work on self-driving technology) might acquire it. That didn’t happen, but Lyft’s stock has jumped a lot. I’m not sure how ride-sharing will be profitable as it is now, so I’ve been selling off shares to protect myself if it should drop to $0.

I was in a forum a couple of months ago and nearly everyone said this was the best dividend investment paying around 8.5%. They had some good news in the last earnings and I’m up 25%. It’s better to be lucky than good sometimes I guess.

I’m very morally conflicted about investing in cigarettes and will probably sell this off soon.

This was another case of being lucky. I saw it get down to about $18 a share and thought that it was much less than the IPO, so let’s invest a little. It has been up nearly 500%, so I sold off some to play with the house’s money. (If you hadn’t noticed, this is something I do a lot.)

Warren Buffett gave up on the company, so I jumped in at a share price lower than him. It has a dividend yield of 4% and my cost basis is about $22 a share (it’s trading at $39). I have been happy with the returns for a couple of years.

I bought Ford because it was paying a 12% dividend due to the COVID-19 impact on its stock price. Ford needed to keep the money to run operations and decided to eliminate the dividend. What could have been a disaster has turned into a blessing, the stock is up 80% from where I bought it.

I bought this about a year ago for its 7.5% dividend yield. I felt like people would still need their cell phones and cable service in a pandemic. It also looks like HBO Max is a good streaming service. The stock itself is up 7%, so with the yield, it is looking good.

I bought a few shares at around $6.50 when it was looking like a disaster. It’s around $19 now. I sold a little to play with the house’s money once again. It used to be a $20 billion-dollar company, so maybe there’s still room for it to grow.

I bought a little of each of the three major cruise lines when they tank due to COVID. At the time it was less than half of a percent of my portfolio. I just wasn’t sure the entire industry would go away forever. Now they are a little over 1% of my portfolio. I’ve been selling some of them off at highs and it’s close to playing with the house’s money.

Similar to the cruise lines, I bought in at $109 as it was a bargain from its $300+ highs. I was counting on COVID getting solved at some point and them being able to figure out their plane troubles. I sold some to play with the house’s money or this would be a bigger percentage.

Uber seems to lose billions of dollars a year. Still, I thought that at a $50 billion market cap, it had significant assets and would be acquired if nothing else. Guess what? Sold some for house’s money sake again.

I don’t like to keep a lot of cash around. I’ve been putting most of it into BND, so I can at least earn some income on the dividends.

So that’s the rundown of how I invested my money. As you can tell, things got a little messy in some places and I got lucky in other places. The overall trend right now is to try to sell some of the individual holdings at highs and invest them in index funds.

I would also be willing to invest in new satellite stocks, but I haven’t found anything that’s a good value recently. Most of the companies that seem cheap to me (AT&T for example) aren’t likely to grow much. That’s another reason why I am content to keep the money invested in a place in bonds or dividend stocks while I wait to find a new opportunity.