It’s been a strange year. On one hand, it feels crazy that it is already June. One the other hand, it seemed like a really long winter. Maybe that’s because we (in New England at least) skipped spring completely. 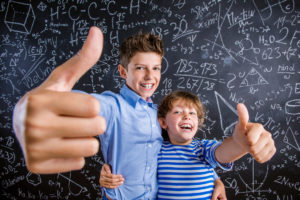 I don’t want to rush the year on too quickly, but for us summer is here. Our kids graduate their preschool classes on Monday and Tuesday, about two weeks before most other schools end their year and summer camps begin.

I’ve got a bit of Tiger Dad in me, so I’ll be picking up where the teachers left off. It won’t be too bad though because the kids have camp scheduled. We also have a lot of other fun activities planned.

My first academic love was always math. So far it looks like I didn’t pass the math gene on. It’s far too early to tell as pre-school math is mostly about counting and not much else. It can’t hurt to tilt their exposure towards experiences that focus on math.

I’m sure you are just dying to read about pre-school math curriculum. Hmmm, maybe you are not. While this may be a better fit for a parenting blog, let’s not forget that math is the foundation for personal finance. It’s not like this is a completely crazy topic for a personal finance blog.

Once we have a firm grasp at math the Warren Buffett’s Secret Millionaire’s Club Cartoon will make more sense. Bet you didn’t know that Warrent Buffet had a children’s cartoon about entrepreneurialism.

I don’t have a degree in education. I’m not known for my patience. I should be a horrible teacher. Maybe I am, but for whatever reasons my kids seem to get it. I’ve got a small sample size with similar genes, so this may not work for you.

Math is a very broad subject. For the 4-5 age group that I’m targeting, the focus is mostly on adding and subtracting. I’m throwing in fractions, because the concept of slicing a pizza is something that I think they can get. I’m also going to try to develop multiplication because… well… #TigerDad.

There are a lot of different ways to learn. I’m hoping by mixing a few different approaches, we’ll keep things fresh. I might as well start with possibly the most controversial…

Before I get to the good stuff, I should tell you that I’m linking mostly to Amazon versions of products. I will make a small commission if you buy product. However, you shouldn’t forget that your library can save you hundreds of dollars.

I get that kids are glued to their tablets nowadays. When I was growing up, it was controversial for kids to be glued to the “boob tube” (a.k.a. television). There is a lot of research that says that limiting screen time is for the best. I agree with that. However, research seems to show that tablets can be good and the same is true for television. The key is focusing on the quality of what is being presented. By the very nature of what I’m trying to teach, it’s going to be high-quality by almost any standard.

I’m going to start off with a few videos. These are short movies and something that be treated as a bit of a one-off.

I’m still researching this area, but in the meantime I found a great series of math fiction books, Sir Cumference. These are fictional stories of knights and dragons with math spread throughout.

We’re still on our first book, Sir Cumference and the First Round Table and the results so far are mixed. I thought it was a great book, but they weren’t as interested as they are for other stories. Maybe I picked a bad night to read it? Maybe it is a year above their level.

I usually read to the kids before bed, so my hope was to get some mathy dreams percolating. We usually do two books a night depending on size). This is longer than most books we read, so I’m hoping we can stick with this series for awhile.

There are also a number of great workbooks at our local Dollar Tree. However, this is a different kind of book than what I was originally thinking about with this section.

This was really the inspiration for the whole article. It seems there are so many tremendous board games out there for kids to learn math. I want to have game night a few times a week. We have to see how the summer scheduling goes with the wife’s work, camp, and night events like sunset concerts and baseball games.

I found a pile of sneaky ways for a Tiger Dad like myself to slip math into their brains. I’ve been trolling Amazon for discounts and cheap prices on all of the following:

I covered videos above, but there are a lot of television shows that cover math concepts. My kids are already watching a lot of them. I have personally watched many episodes and highly recommend:

I’d like to call out CyberChase, it’s very much “under the radar” because it is an older show (though they still make several new episodes each year). I think it’s on PBS once a week. I ended up signing up for PBS Kids on Amazon for access to that and a bunch of other shows. I hope PBS gets the vast bulk of that money, because supporting PBS is something I believe in.

I haven’t scratched the surface on using apps to learn math yet. I certainly should. I’d love to hear your suggestions.

We have a subscription to ABC Mouse and it works well with our new Amazon Fire HD 10.

If I find I need more, this list from Common Sense Media. They have another great list of apps and websites here

Final Thoughts and Your Turn

As you can tell there are nearly infinite resources out there in just about every fun way you could imagine. I wrote the bare minimum about a few of them and I still feel like this is the longest article ever. After all this typing, it feels like we’ll be spending 90% of our time on math, but that’s not the case.

Now it’s your turn to give your thoughts. Feel free to rave about a mathy resource, rant about the lack of personal finance focus in this post, or anything in between.