There are millions and millions of people who LOVE Disney.

I’m not one of them.

I’ve got nothing against Disney, but I don’t understand the big draw. What’s your memory of Mickey Mouse? Mine is the Christmas Carol remake and The Brave Little Tailor. If Apple still marketed itself with an Apple Newtown or an iMac desktop from 1998, you’d consider it strange, right? 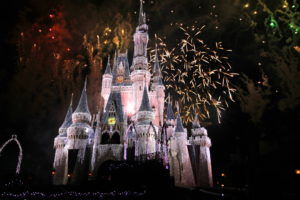 I know some of you are saying those are fighting words. I actually do like a lot of Disney stuff, but it’s mostly all Pixar and Marvel, which isn’t the Disney that I grew up with.

To each their own, right?

Disney World is different than Disney itself. I went a couple of years for the first time since I was around 7 or 8. I gave a grade of mixed bag, especially since even Make-A-Wish kids had to wait three hours to get in just as we did. (Though some people tried to get them up towards the front of the blob of people as best as possible.)

Despite what I wrote above we’ll be bringing our 4 and 5 year old kids to Disney World for the 2nd time.

We did enjoy EPCOT Center though. There weren’t any crowds and there was a whole sustainability section of the park. Even my 2 and 3 year old (at the time) loved it. And the part where you travel from country to country sampling food and drink, well, that’s a lot more fun at 40 than it was at 7.

Why go back? The kids really did have a great time overall and it’s certainly worth a second shot. The park apologized for the 3 hours to get in and said it’s never like that. From a sampling of friends it seems like most of them agree.

Another key consideration… we are able to do Disney in-style and on the cheap.

Active Duty, Credit Cards, and Frugality For The Win!

Due to my wife’s active duty status, Disney gives us a discount. It looks like they don’t make it public on their website, so I’m not sure I should publish the deal. That’s just as well, as my wife went to sleep and I’m writing this in hopes of publishing tomorrow. In other words, I don’t have exact pricing. What I can tell you is that I made a spreadsheet of costs a couple of years ago and it was $196 per ticket. I think that’s a 4-day Park Hopper Plus, silver-edition, with cherries. I honestly don’t know what it’s called these days, but I know the normal price was around $274 at the time.

This is another active duty perk. However, before you shoot me, it’s probably cheaper to stay at other places. When we went to Disney a couple of years ago, we had a week of timeshare that was expiring, so we used that. (That’s also part of the reason why we brought a 2 and 3 year old to Disney World. The other reason is that we were meeting friends who lived in California.) There is a lot of cheap lodging in the area though.

How does Shades of Green compare to the other Walt Disney World hotels?

Shades of Green would be comparable to the Disney Deluxe Resorts such as Disney’s Polynesian Resort. We have the largest Standard Rooms on property, and a variety of restaurants, as well.

I’m not familiar with the Polynesian Resort, but Mouse Savers says it would be $649 a night for the time we going.

Staying in the park should be a big upgrade from a couple of years ago. Maybe our wait times to get in will only be a couple of hours? We might also be able to stay later. I heard this is a real thing, but we’ve been so busy that we haven’t done much research. I did some 6 months ago, but it’s long been purged from my memory.

We’ll be staying only 5 days due to some other commitments my wife has in the area around the same time.

Southwest requires you to pay for certain flight taxes in cash, so we did have to fork out some money. You’d think I’d have a receipt in my email, but I don’t. I think it was probably about $100 in total.

On the flight back, we found a $190 fare from American. Me and the kids are flying back for $683.37 with taxes/fees. (Note: American gives much better email receipts.) My wife is flying to her next commitment before coming home. That’s partially a business expense, so it’s hard to put in here. However, we could easily presume that she would be coming back with us under normal circumstances. It seems fair to call it $1000… $683.70 + $190 + $37 wife’s American taxes + $100 Southwest taxes.

When it was just my wife and I traveling, things were much cheaper. This is one area where kids really double the cost.

This is one cost that’s difficult for us to dodge. However, it might not be impossible.

One of the great perks to staying at a timeshare was that we could shop at grocery stores and make a lot of our own food. However, we’ll be “trapped” in Disney without a rental car. Shades of Green does have a convenience-type store at the property. I haven’t seen a review of the prices and I’m a little worried that they might be sky high. Even so, it would be cheaper than eating every meal for 5 days. Everything is relative, right?

We might be able to go shopping before we check in, but I’m not sure. I’ll have to review our travel itinerary which is not very organized at this time. If we do have time to go shopping, we’ll have to plan what we buy carefully. The rooms at Shades of Green do have refrigerators, but the standard rooms don’t have microwaves.

I really didn’t know what to make of this. If we don’t shop, we could bring canned tuna and/or chicken, mayo, and make some sandwiches? We can (and probably will) also bring lots of mixed nuts. We could bring some cereal. Just for a fun exercise, if you wanted to be super frugal, what would you bring on a plane for food? Since we are flying there on Southwest, we’ve got plenty of checked luggage space, so that’s not a big concern.

If we do shop, we could buy some deli meats, cheese, milk. We wouldn’t need to think about packing food with us, because we could buy all the things above.

However, as I’m writing this article, I came across a game changer. I was reading this extensive Shades of Green review from my friend Ryan and he says:

“To save time and money, we brought breakfast items to eat in the room before we hit the parks for the day. Each morning I took some microwavable breakfast sandwiches up to the 3rd floor laundry room to heat up for breakfast. This allowed us to save quite a bit of money during our stay, and we were able to get out of the room more quickly in the mornings as opposed to sitting down at a restaurant for breakfast.”

With the possibility of a microwave, we can do canned soups and Easy Mac (kids’ favorite). It’s a mini-fridge, so frozen foods might not work out so well. However, I wonder how bad they’d go if they were still kept at refrigerator tempature and allowed to thaw a bit? It might change cooking times, but I don’t think it would cause a food safety issue, would it?

Here’s another fun question. What kinds of foods would you bring with you into the park? Presume that you aren’t going to bring a cooler to keep food cold.

Now we’ll certainly be eating some meals at the park. We aren’t going to try to pinch every penny. However, the more can we plan quick and easy meals, the more rides we can get on. Also, if I’m eating at a restaurant every meal of every day, I’d probably be sick by the 5th day. I think I’d just eat too much junk, fast food.

Adding it All Up

I didn’t include ground transportation because we won’t be renting a car while we are there… except to maybe get there and do the grocery shopping. If you are staying outside the park as we did last time, we had to pay car rental costs too. Those are somewhat reduced by the cheaper costs of the grocery shopping.

There are certainly going to be some extra costs, so it might be fair to add a couple hundred for miscellaneous stuff. I’m not going to try to be perfect, so

How Does that Compare?

I decided to put together a table of what I thought we might pay if we didn’t hack the flight and/or couldn’t use our military connections. Here is our vacation next two possible vacations:

However, you don’t have to trust my assumptions, which admittedly may be less than perfect.

As fate would have it, Money Magazine reviewed 4 levels of Disney World vacations. They crunched the numbers for 4 nights, which is pretty close to the 5 nights that we are planning. I’ll let you read the article, but the conclusions were:

* Note: Some of these are my categorizations of the levels. This was because they put them out of order and “cheaper” doesn’t make sense when the order is changed.

I would say that we are getting a vacation that is closer to Deluxe than the others. Like the Money article, ours is aiming to be 5 days at a premium-level hotel. We won’t be spending near the Deluxe food budget or the $800 on souvenirs and extras. At the end of the day, the Deluxe budget is is worth 3 separate vacation trips with our plan.

This highlights one of my biggest conundrums with Disney. It triggers ALL the happy feelings of saving thousands of dollars. At the same time, it triggers a few of the reality feelings of spending thousands of dollars over a few days. At the same time, I realize that spending money on experiences and family is a better use of my dollars in many, many areas.