I hope things are going better for you than for us right now. I tried to publish this yesterday, but our youngest had a temp of 103. He missed Halloween. (We were able to get him plenty of sympathy candy. He didn’t miss Halloween much. “More Candy, Less Work,” he says.) Our old dog had been better and better… until this morning when he simply couldn’t get up like back in August. Hopefully, both are just temporary hiccups, but that may mean that this article is more of a B- effort. Oh, we are also boarding our first blind dog, but his first day has gone awesome.

With that out of the way, let’s cover a light topic today… politics. Of course, I’m being sarcastic. As Linus says in It’s the Great Pumpkin, Charlie Brown, “There are three things I’ve learned never to discuss with people: religion, politics, and the Great Pumpkin.”

Two years ago, I wrote:

I usually don’t write political posts. I don’t think I wrote one in the first eight years of Lazy Man and Money. I’ve probably averaged one every couple of years since. This article is a frank talk about the United States economy, though, and it’s a discussion that is worth having whichever side of the political spectrum you are on.

That’s especially true for this article. It’s two years since I wrote, vote Biden for the economy. I’ve since gotten a few “I told you so!” comments.

Before we dig into the economy, it’s important to note that non-political issues are essential. Going into the last election, I wrote the following about the best candidate that Republicans had running for President, “Those non-financial things are important, but they are outside the scope of this article. That means that I won’t cover caging children, tear-gassing peaceful Americans, bragging about sexually assaulting women, being credibly accused of sexual assault dozens of times, inability to understand second-grade science, aligning with our enemies of Russia and North Korea, nepotism, violation of the emoluments clause, impeachment for trying to get a foreign country to attack Americans, racism, supporting white supremacists, telling members of US Congress to go back to their country, misinformation/disinformation/” alternative facts”, voter suppression, calling our war heroes losers, or trying to end health care for millions and millions of Americans during a pandemic.”

At the time, I had no idea that he’d try to overturn the election and create an insurrection at the United States Capitol Building that killed several people and injured many, many others.

There’s another vote coming up, and that guy isn’t on the ballot. Instead, there are a lot of people who supported that guy on that ballot.

In any case, I wanted to revisit where we stand with the economy.

Everyone’s mind is on inflation. I’m no different. I went to the grocery store to get my sick son some Gatorade. I hadn’t been in a non-Aldi grocery store in months. I couldn’t believe the prices. I ended up buying the bare minimum.

I understand that it hurts to pay more. However, I also look for the cause and the solution. Change, for change’s sake, doesn’t make things better. There has to be a well-defined plan. Otherwise, you are just a monkey randomly throwing darts at a dartboard and hoping it works out. I don’t know about you, but I feel life is too short for that [poop].

So what’s the cause of high inflation? We have COVID and the Russia-Ukraine war. No United States political party was going to be able to stop either. That’s why:

Every country has high inflation

Europe just announced record 10.7% inflation. A lot of that is due to the Russia-Ukraine war. Not only has it raised gas prices, but Ukraine hasn’t been able to export grain consistently – and it typically exports a lot of grain. While that’s specific to Europe, much of that reverberates across the pond.

Exxon had its best quarter in 152 years. It had tripled last year’s earnings to $20 billion. I know things were terrible when COVID shut them down. Now Big Oil is back, making big money. Exxon will return $30 billion to shareholders between dividends and stock buyback. Meanwhile, they are spending 30% less than what they were spending before COVID. I’m not saying that companies shouldn’t make money.

I’m picking on Exxon, but Chevron and BP all have extraordinary profits.

It’s important to know that political parties don’t play a role in how Big Oil runs their businesses. We can ask whether they should, but that’s a far greater question about capitalism that I can’t get into here.

There’s some opinion that the Biden administration isn’t investing in oil, but the oil companies have the leases and permits to produce more oil. They don’t have any incentive as long as they book record profits. It takes time to drill and create more supply, and many think a big recession is looming. If that happens, consumer demand could dry up just as Big Oil is ready to release that new supply.

The Federal Reserve Bank was Slow

Too Much Stimulus Money

When people have too much money, there is often more demand than supply. When that happens, prices go up. Both political parties gave money away due to COVID. It might have increased inflation, but it also likely helped the rest of the United States economy. I have more thoughts on that in the next major sections.

A lot is going on, and unfortunately for United States voters, politicians can do very little about inflation.

The economy is a lot more than inflation. The unemployment rate is 3.5% at pre-COVID levels. I see Help Wanted signs everywhere. My 10-year-old son has said he’d love to work at Mcdonald’s for $16/hr. It seems like anyone who wants a job can get one.

Wages are up too… but they aren’t up enough to keep pace with inflation. If prices are up 8% for the year, but your paycheck is only up 5%, you’ve lost 3% of buying power. (I love easy math.) High inflation feels worse because you see it every day of the month, and the wage increase comes only when you get your paycheck. In any case, if inflation was 3% in the past and you didn’t get a raise, which happened to many, many people, it is essentially the same as what we’re seeing now. 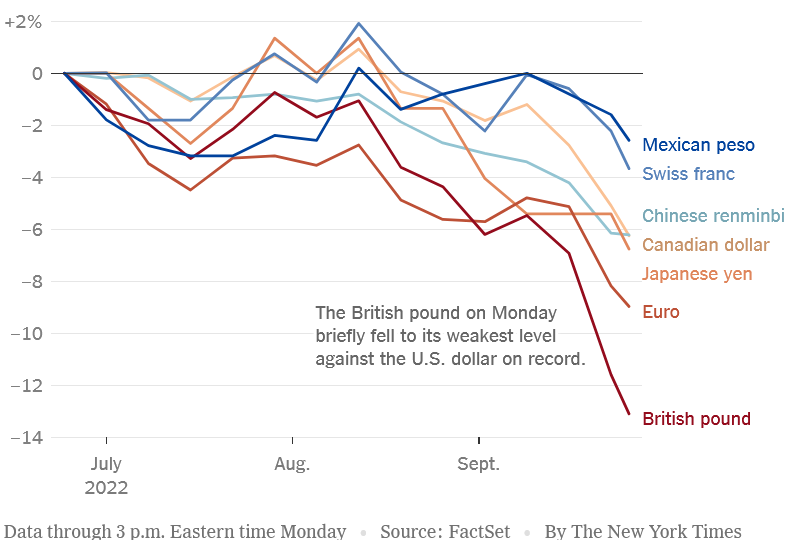 When your economy is good, your currency is strong. Everyone in the world wants a piece of the US Dollar. I know that travel is expensive now (thanks to the aforementioned oil prices), but if you find yourself in another country, you should find that your dollar goes far.

The stock market is down around 20% from its highs. That’s not great if you look at your 401k and compare it to what it used to be.

However, if you look at it another way, almost all the other countries are doing worse. My European stock allocation is doing very poorly. China stocks are a complete debacle. As much as I like to invest in other countries for diversification, investing in the United States would have been the best move.

I know only the smallest sliver of my fellow American voters will read this. I also know that most of the overall voters are going to vote based on if they feel like they are better off than they were two years ago.

I would urge them to vote instead based on how they are doing against the competition. Are we (the United States) stronger than we were in November of 2020? No doubt! We’ve got great economic momentum. Do we have a path for further improvement if we have a different parties in control of Congress and the Presidency? I don’t think so. We’ll have deadlock where each party blocks the other – even more than it does now.