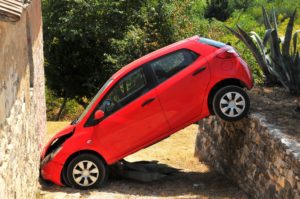 Recently Kosmo causally mentioned in an article that he was teaching his 14-year-old daughter to drive. In Massachusetts, where I grew up, the age to start is 16 when you can get a learner’s permit. Fourteen seemed very early to me, but my view of Iowa is that it’s all farms where it’s impossible to get into a car accident ;). While that may be a bit of a joke, it isn’t too much of an exaggeration.

On the surface, this article may seem like it doesn’t have much to do personal finance. I’d argue that safe driving for everyone in the family can save you thousands of dollars compared with the alternative. When I learned to drive

The legal driving age, and the various steps to a full license, vary dramatically by state.  In Iowa, you simply need to pass a written test in order to get a permit.  At that point, you can drive with an adult.

Here are the steps my daughter and I have gone through.

The first step is a written test on the basic concepts of driving.  In the past, this was a written test given in the DMV office.  This was typically a nightmare.  Not the exam content itself, but the very long lines at the DMV.  You could wait an hour or more before your turn came up.

(OK, I need to tell this one DMV anecdote.  I was there to renew my license several years ago.  The person in front of me had lost his license.  I don’t mean that he’d had it suspended; I mean that he had misplaced the actual physical license.  Apparently this wasn’t the first time.  The DMV person told him that if he kept losing his license, the DMV would need to investigate him.  The guy couldn’t understand why.  The employee spelled it out for him – the concern was that he wasn’t actually losing the license, but was selling it to minors so that they could use it to buy beer.)

In the COVID era, the process has changed.  The exam is now online.  The teen’s proctor (me) requests an exam time and promises to ensure that the kid won’t cheat.  A few days later, we had a time slot.  My daughter signed on and passed the test.  She turned the screen to show me the message… and it promptly disappeared.  We didn’t receive a confirmation, so it wasn’t apparent if the grade got logged.

Now she needed to actually go to the DMV and get her picture taken.  This is by appointment only, due to COVID.  The first available slot was a few weeks out.  I signed her up, even through I wasn’t sure the grade had been logged.

I sent an email to the DMV to let them know about the glitch.  Several days later, I got an answer – her passing score had indeed been logged.

The appointment went off without a hitch.  She had a vision test, got her picture taken, and left the DMV with a temporary paper license.  Her permanent one would arrive in the mail in a few days.

She’s a very hesitant driver, so we started things slowly.  We went to her old elementary school and did some laps in the parking lot.  After fifteen minutes of driving at top speed of 10 mph, with nearly constant braking, we were done.

School parking lots are a great place to practice driving on weekends, because they are typically deserted.  During the next few sessions, we alternated between the elementary parking lot and the larger one at the high school.  We still struggled to get above 15 mph, but she was getting more comfortable with the basics.  Driving forward, turning left, turning right, she had mastered all the skills.

Well, maybe not all the skills.  We practicing pulling into parking spots, and pulling out.  Backing out was confusing – which way to turn the wheel?  I let her puzzle it out herself.  Try it, and if it doesn’t work, try it again.  There were no cars anywhere near us, so I wanted to let her use trial and error to figure things out.  We went over a few curbs in the process, but nothing that my chiropractor can’t fix.

Finally, I had her take the plunge – driving on an actual street.  We exited the school parking lot and she drove a few hundred feet and turned onto a dead-end street.  She was nervous, but it was a big step forward.

A friend of mine suggested driving in cemetery parking lots.  They often have winding roads, and if there is any traffic, it’s very slow moving.  We drove to a town about ten miles away and pulled into the cemetery.  We switched seats and she was ready to go.

The great thing about this cemetery is that it had a huge hill.  We hadn’t previously done any hill driving, since school parking lots typically aren’t on a hill.  Her first challenge was to be able to crest the hill.  The timid pressure she’d been using on the accelerator wasn’t going to cut it.  She had to press down hard, or we’d roll down the hill.  We got some decent RPMs out of the engine, and made it to the top of the hill.  She drove around the cemetery, and then had to go down the same hill, braking slightly to keep her speed under control.

We live in a town of twenty thousand people.  Small by metropolitan standards, but still far busier than what she’d be comfortable with.  I drove from the cemetery to the nearest town – a burg with a population of about 900.  Perfect.

I had her driving into town and then turn into some side streets.  She had to stop for actual stop signs.  Watching for traffic was another new skill.  She was hesitant at first, waiting longer than necessary.  She was also a bit slow when she was making turns that didn’t require a stop.

We meandered around town.  We practiced parking in various lots.  More than once, the navigator (me) inadvertently directed us onto a dead-end street.  On one of those occasions, I had her practice a three point turn, which she executed flawlessly.

Get out on the highway

Next, I had her get on the highway.  She was very hesitant, but eventually got on the road and eventually got her speed up to almost 55 mph (the limit).  She had a tendency to go a bit too far to the right, and she was able to practice this as we drove into the middle of nowhere.  After about ten miles, we turned around and headed back into town.  I told her to drive back to the cemetery on the other side of town.  She’s driving 25 mph as we exit town, since that’s the speed limit.  An impatient driver races past her – in a no passing zone, uphill, and with ongoing traffic.  His stupidity created a nice learning opportunity for my daughter.  She correctly explained all three problems with the pass.

A long way to go

We still have a long way to go.  It will likely take a few more lessons before she’s comfortable driving in our town.  I start in some of the more remote areas and eventually migrate to more congested areas.  At some point, we’ll actually get out on the interstate and practice lane changes and merging.  Finally, we’ll practice some driving at night.

Tools of the Trade

There’s more to driving than just the physical tasks behind the wheel. You have to know about all the things that go along with keeping a car in good running order… in good times and in bad. [Editor’s Note: Kosmo’s got a few links to Amazon coming up. If you buy something, I may make a small commission.]

I’ve had her pump gas once, and walk through the basics of the pay at pump process.  Then I popped the trunk and walked her through the various tools inside.

Although it’s always a good idea to have jumper cables in your trunk, they’re only helpful if there’s another car nearby that can help you.  A starter pack relies on a rechargeable battery and can jump a dead battery in seconds.  I’ve had one in each car for years.  I recently replaced the bulky old ones with a lightweight DB Power units that aren’t much bigger than a VHS tape.  Note that you must charge these on a regular basis, or they’ll be dead when you need it.  We recently had a battery issue with one of the cars.  The battery was only a few years old, but ended up having a bad cell.  I used the starter pack a half dozen times in the span of a couple of days.  I had just bought them a few weeks earlier, and they passed the test with flying colors.

Most cars come with a jack that is… terrible. [Editor’s note: Kosmo used more descriptive and colorful language here.]  Get yourself a hydraulic bottle jack and you’ll thank yourself the next time you get a flat.  Sure, you could wait for roadside assistant, but a friend of mine recently had to wait for six hours.  With a bottle jack, you’ll quickly have the car jacked up.

The lug nut wrenches in most cars are also pretty crappy.  If your lug nuts are on tight, it can be almost impossible to loosen them.  A four way cross wrench can give you far more leverage.  Seriously. it’s like you hit the “easy” button.

It’s never a bad idea to have a set of wrenches in the car.  You may need to loosen battery cables or any of the other various nuts and bolts.  You don’t need mechanic quality, since you’ll have infrequent need of them.  However, it’s a good idea to get a set that has both “standard” (SAE) and metric wrenches.

None of these are particularly expensive.  You can get a decent start pack for under $100, and you and get the other three items are around $60 total.  They also don’t take up much room.