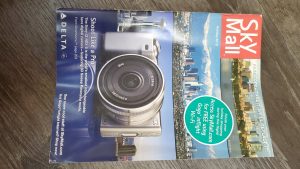 I’m always amazed that I can read thousands and thousands of words and have dozens of conversations… and nothing ever becomes of them.

Then I hear 7 words and it motivates me to change my life. Last night, my 7-year old said these words:

Years ago, we resisted the temptation to buy a McMansion. It was more important to us to spend responsibly. It’s hard to retire early if you are “house rich, cash poor.” In theory, our 1800 sq. ft home should be enough for a family of four and a dog. In the world of COVID-19, like everyone, we wish we had a little more home. Unfortunately, my crystal ball’s history of success is mixed at best.

In practice, we could use more space. The kids’ grandparents buy tons of toys. I buy every STEM toy known to mankind. My wife knows she has a summer dress problem. I have my own tech gear problem.

However, the biggest problem of all is that I can’t let anything go. I simply can’t bring myself to through something in the trash. I always think, “That has value.” I also feel terrible for contributing more to the landfills. There must be a way to reuse this thing. (For some reason this doesn’t occur to me when I’m buying stuff.)

The worst example of not being able to let anything go is in the image on this post. I have a Sky Mall magazine from 2010. It’s a 10-year old magazine from a company that went bankrupt 5 years ago. Obviously this is extreme and it’s going straight into the recycle bin. However, all the other things I have hoarded are not as easily discardable. It’s not as bad as what you might see on Hoarders, but it certainly isn’t insignificant either.

The other problem is that soon after we had two kids, my wife’s job changed. They put her on a non-stop treadmill and she’s often working 14-hours days. When she has any time off we want to get out and enjoy life with the kids while they are still young. The regular home maintenance gets lost in the shuffle.

It’s time for a change.

My 7-year-old is right, he should have a playroom. It’s not just going to be a kids’ room though. We need a space that can be used for exercise, watching a movie/game (when the primary movie space is being used), doing some quiet deep work, etc. Another living space instead of storage space would help a lot.

There’s a saying, “What you own, owns you” and that’s the case here.

Since this is a large task, I went where I always go, to a spreadsheet. I started to break it up into smaller parts. For example, much of the stuff is going to have to go or get moved to the garage. However, the garage has to be organized and pared down as well. It’s not going to be easy, but it’s something that can be done. One other big plus? I can do it without depending on some outside factor derailing me. It feels great to have full control over something.

There’s an extra benefit to doing all this work… I can put the kids to work. They can’t call a contractor or figure out how to combine a water heater and furnace. However, I’ve said that if parents are doing all this work to make something that will be a playroom, the kids are going to have to help. That means no fighting with each other. It means getting drinks themselves when they are thirsty. It means cleaning their room and having a normal bed-time routine that doesn’t take hours.

I’m just starting to scratch the surface on what it would cost to finish the basement. It is difficult because I don’t have a design in mind. I know that I want it to be able to perform many different functions. I know that I want to use concepts of tiny houses to maximize space. That’s about all I know. I think the costs will be around $15,000. It’s a lot of money, but I think it will be worth it.

If anyone has any advice on a basement renovation or decluttering in general. I’d love to hear it. I should probably watch the Marie Kondo show on Netflix, but that’s precious time that I could use actually doing the decluttering.