Passive income is difficult to come by. Sure we’d all like money for doing nothing, but that’s hardly sustainable. Some have argued that passive income doesn’t really exist. We’ll have to save that question for another day. Today, I want to talk about income that is “passive-ish.”

Every month, I write an article about our five income streams. I focus on the four that are “passive-ish.” Here is one visual representation of those income streams: 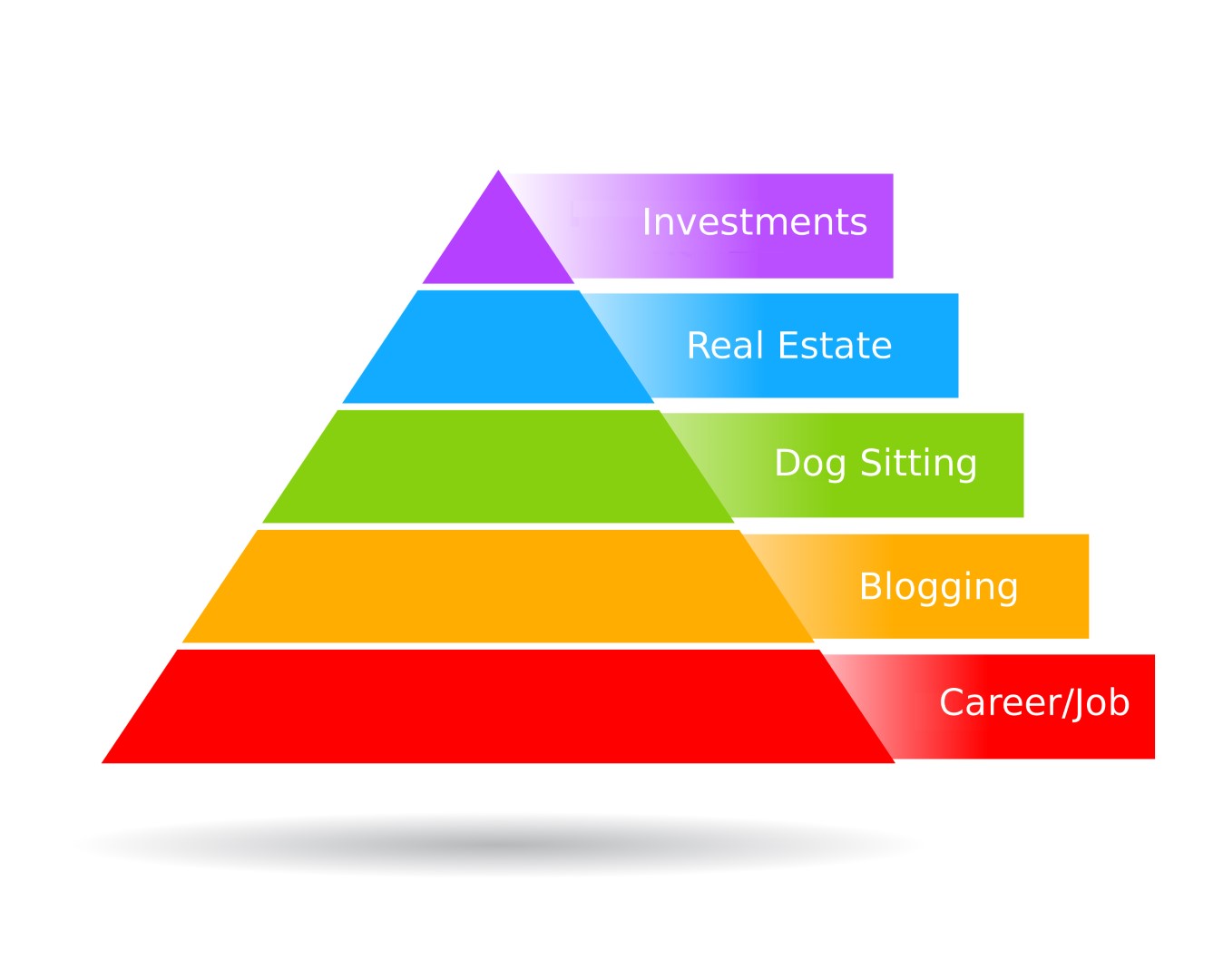 This is my passive income pyramid. The income stream at the bottom is not passive at all. As you move up the pyramid the income streams take less and less work.

Let’s work our way down from the top:

This is any interest or dividend income that you earn from various investment securities: Stocks, Bonds, CDs, REITs, etc. Look for this income in your brokerage or bank account. You typically don’t need to do any work other than the initial purchase of the investment.

The big downside to this type of income is that you have to earned the money before you can invest it. If you are a fan of the 4% “rule” a million dollars will likely provide you with $40,000 of passive income for a reasonably long pyramid of time.

Being a landlord is clearly a job. However, it’s often just a few days of the year. There’s work in changing tenants and when appliances break down. The rest of the time, you can mostly cash rent checks.

Like the investment income above, you have to earn the money before you can invest it. However, due to leverage, you may only need 20% (or less) of the money to start with.

Note: I used a range of estimated passive income as a property manager can take the work out of being a landlord.

Dog sitting is clearly work too. However, it’s work that my kids can do or at least help with. I’ve made over $50,000 dog sitting on Rover. (Read my review here)

There are some downsides with dog sitting. It doesn’t pay a lot. Some people don’t like dogs. It’s much easier to do if you work from home. It helps to have a house with a yard. You give up flexibility of travel or going out.

However, I can make some money while I’m doing a different job, watching Netflix, or even running some quick errands.

Blogging for dollars is a lot of work. Most people don’t make anything. I think I was lucky that I got started a long time ago. With around 2500 articles over 13 years, this website brings in some solid passive income. I have had some months where I was away on vacation and there was still a decent base income.

The downside is that it takes a lifetime to write all the content. You also have to promote the content which means being active on social media. It took me approximately 2 hours to make the above graphic as I struggled trying to figure out how to edit EPS vector graphics files in LibreDraw. I finally gave up and used a regular graphic editor, which still took more time than you would imagined.

This is straight up work. You put in the hours and are paid accordingly. You don’t work, you don’t get paid (with the exception of standard vacation time.)

You could reasonably argue that this doesn’t belong on the passive income pyramid at all. I decided to include it as a comparison for everything. Also, it’s likely the main source of income of people reading this.

My main motivation for creating this pyramid was to highlight the “passive-ish” levels above this. These levels form what I call “alternative income.”

What is Alternative Income?

While these four are our alternative income sources, you might have another source. Maybe you wrote a book (even an ebook) that sells 100 copies a month. Maybe your first 4 mambos didn’t pay off, but you Lou Bega’d some big music royalties on the 5th try. Maybe you developed an eCourse and people pay to learn that skill. Maybe you own a bunch of vending machines and collect many quarters every month.

Where do all those fit on the Passive Income Pyramid? I’ll leave that as an exercise for you. I’d put Bega’s towards the top and the vending machines towards the bottom.

While I happen to have to have more of these alternative income streams than most, quantity doesn’t beat quality. There are many people with a huge amount of investment income that can live a 100% passive income lifestyle. My wife’s military pension will fall into that category as well. Some have real estate empires that they’d automated well. To live a passive income lifestyle, you don’t necessarily have to have a lot of alternative income streams, just one really good one.

Can you think of some more alternative income sources that could fit on our pyramid? Let me know in the comments.