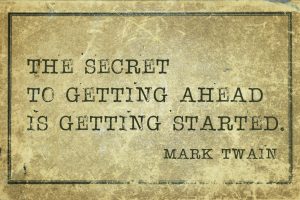 Last week, I saw a Tweet from someone lamenting that their relatives could have made a few million dollars if only they invested their money. Instead, they saved hundreds of thousands of dollars in the bank for decades earning little interest. I don’t know all the details of it so I don’t want to get into the specific situation. Instead, I wanted to share that it inspired me to make this Thanksgiving reflection:

Adding that I'm thankful for my mother's financial influence to the list of things I forgot to be thankful for yesterday.

I realize that I’m in the minority… a tiny fraction of a minority of people who learned about saving, compound interest, and investing very early. I live at the intersection of Nerdy and Boring, so those topics interested me. I know I’m weird.

For everyone else, getting started investing is tough. It can be confusing. But before you can get started investing you need to save some money. That’s a huge obstacle for many with student loans, child care, expensive housing, health care costs, stagnant wages, etc. (I’m sure I missed a few in there.)

If you are anything like me or anyone else I know, life keeps you busy. It’s easy to put saving and investing to the bottom of the priority list. You can always find time to save and invest later, right? (Unfortunately, wasted time investing can be costly with to how compound interest works.)

We all have monthly expenses. Wouldn’t it be nice if we didn’t? Who wouldn’t want free Netflix, a free car, or a free home?

Your total expenses are made of many little ones – things like house, car, utilities, and even that streaming subscription.

Let’s take Amazon Prime as an example. Prime is so popular that I’m guessing most of you can relate. It’s $120 a year, which makes the math convenient for us. If you save and invest 25x or $3000, you can have Amazon Prime for life. It seems like a lot of money to save for that expense, but compound interest can really help you out. You don’t have to invest $3000 at once.

2. Track Your Net Worth by Percentage

You may see some bloggers posting about how their net worth jumped 2% for the month making them $40,000. That can happen when you have a $2 million dollar investing nest egg. I’ve got good news and bad news about that. The bad news is that $2 million nest eggs is not very normal. Fortunately, you already knew that bad news. The good news is that the story behind the nest egg is usually saving and investing over a number of years. That’s doable if you have the right mix of income, frugality, steady investment, and some market luck.

When you are starting out, the large numbers can seem either inspiring or scary. I could see people going in both directions. I see it as inspiring, but I’ve read comments from people that say, “I could never do that kind of thing.” Everyone’s situation is unique. I’ve read stories about a 9-year-old who is worth over a hundred million dollars from his YouTube success. I’ve also read stories about the low-income janitor who died with millions of savings. There’s a lot of room for financial success anywhere in between.

When you are starting out, try to focus on your monthly gain of net worth. Hopefully, you are saving some money and because your net worth is low, you can make big gains here. When you have $2 million dollars, it’s hard to grow your net worth by 10% (unless you are a 9-year-old millionaire YouTuber). You are at the mercy of the investment markets. When you are starting out, you might be able to grow your net worth by 20% simply by saving $2000. Saving $2000 may not be easy depending on your situation, but hopefully sneaking $40 away a week in a bank (or investing) account is something reasonable for you.

I hope that these tricks help you. The biggest thing is to get started and realize that it is okay to start small. Do you have money hacks that you use to movitate you?

[The following is a guest post from Maria Nedeva, owner of The Money Principle. I met her at Fincon a couple of years ago and we just hit it off. She’s the proverbial smartest person in the room, so I knew she was going to deliver an awesome guest post. When I read it, I thought, “This is exactly how we’ve been able to save hundreds of thousands of dollars over the last decade.”]

I have a story to tell.

But first I want to say ‘respect’ to Lazy Man. I’ve long admired the honesty, passion and moral stance of Lazy Man and Money: love the blog and like chatting to the man behind it. Oh, and I have wanted to guest post on it for about a year: I just never got the guts to ask. This is why I jumped at the opportunity when Lazy Man asked me to guest post. Of course I wasn’t going to miss talking to you.

And as I said, I have a story to tell.

We went from financial ‘suck’ to ‘rock’ in five years.

People ask me how we did it and expect a story of epic struggle and sacrifice.

What they get is the story of a university professor who researched, learned, analysed and worked out hacks.

What they also get is the story of a woman who had had enough of debt and acted on every single hack she worked out.

Maria Nedeva, Owner and Mistress Supreme of The Money Principle.

Now you have to make a choice.

You can either go on The Money Principle and try to find your way around the nearly 800 blog posts I’ve written and published on paying off debt, money management, saving and investing, making money and retirement;

… You can stick around and learn about the three things that helped us turn our finances around.

It’s your call but I’d stay put if I were you.

What paying off debt fast is really about?

People will tell you that paying off your debt, and more generally building wealth, is about living below your means.

Hard to argue with something as obvious.

Still, important as it is, living below your means is not enough. Here are four hacks you’d do well to remember:

Hack 1: To pay off your debt – and to pay it off in record time – you should watch your cash flow as a hawk. Oh, and your single point of focus should be how to increase your cash flow, not your debt.

Hack 2: Don’t strip spending down to bare necessities. Allow yourself some of the things you love and learn how to do them differently and much cheaper.

Hack 3: Learn how to make more money. Don’t wait for your big break. Just start doing something. Check out some ideas about how to make money enough to fill your fridge or to pay your monthly bills on The Money Principle. Trust me; babysitting is not even on the list.

Hack 4: Put every penny of your increased cash flow on your debt. Open a beer and watch it crumble.

That’s it. You have to do a lot of other things as well but these four hacks are what matters; the rest follows.

What does it mean to be a ‘frugal artist’?

Quite a few of my blogger friends are on the frugality side.

So is much of personal finance in the United Kingdom – frugality is respected and admired while making money and investing is seen by some as an expression of greed.

I never bought into the frugality mind set.

Don’t misunderstand me. I like to make my money go further just as much as the next woman; or man, for that matter. It is just that I like to stretch my dollar without losing quality of life.

And I like to make more dollars so that my money stretches even further.

I came up with the idea of ‘frugal artistry’ and have even written a manifesto for frugal artists.

In a nutshell, ordinary frugality and frugal artistry are different in the following:

Put another way, making our bread saves us close to $50 per month. If it were only for the saving, though, I won’t do it. I do most of our baking because, apart from saving money, it helps me relax and is much healthier than buying bread with a ton of additives. This is what being a frugal artist is about.

Buying a cheap suit can be part of ordinary frugality. It saves you money in the short run but is very wasteful long term. One, cheap suits need to be replaced sooner and you may find that ultimately you spend more. And two, wearing cheap suits can jeopardise a promotion at work.

Becoming a frugal artist is worth it. This way, you can make your money go further without loss of quality of life.

What is the ERR strategy for money management?

The ERR strategy for money management is about three things:

Using this strategy assumes you already have a budget. If you don’t have one, you should.

I came up with this strategy for money management to bring together three very important sides of keeping your budget as lean as a Hollywood starlet without depriving yourself. It was featured on LifeHacker’s blog Two Cents as a way to practice frugality.

I suppose it is.

Eliminating waste is about two things: not wasting food and not paying for things you no longer use or you can get cheaper without loss of quality. We, for example, cut over $3,000 of monthly spending by buying only what we cook, finding competitively priced insurance and planning our entertainment carefully.

Replacing activities and routines is about becoming a frugal artist. Can you impress your friends by cooking a three course French dinner rather than going to a restaurant? Do you have friends who have a summer house and can you borrow it for couple of weeks? Can you barter for some of the services you need (for example, do the neighbours garden if they babysit your kids twice a week)?

Reducing consumption is easy to understand. We all over-consume. We drive to the gym. We have rooms full of clothes we wear couple of times and discard. We over-eat, over-drink and over-indulge. Do you really need 30 pairs of shoes?

Go try the ERR strategy. You’ll shave off 20%or more of your monthly budget, I guarantee.

Now you know my secrets.

Turning your finances around is not hard if:

You know what is the best part of all this?

Once you make the three things I was telling you about into habits while you are paying off debt these are easy to keep when you finish with the debt. And the wealth just keeps growing.

This is our story.