Today’s going to be a quicker article. I wanted to let you know some good charity things that are going on with an online personal finance community, Rockstar Finance Forums.

I had caught a social media update (I think it was Facebook) from my friend J$ from Budgets Are Sexy who created the Rockstar website. They were looking to give away $20 to someone in every state. There was only one string attached, it had to be used to do something good. Unsurprisingly, my state, Rhode Island, was one of the few not represented. I joined the forums and asked how I can help them get to their goal.

In a few days I received a $20 Visa card in the mail with a letter about using it to do good.

Then a strange thing happened. This card became an albatross on my mind. I tried to think about the most good I could for $20. I didn’t want to do a normal charity because anyone can just type some credit card numbers into a computer. And since Adam Ruined Giving I’m more mindful about what to do with such gifts.

My son’s school was raising money to buy some Hippo Rollers, which are fortunately not about rolling hippos… though it’s fun to imagine they are. That would have been a perfect place to put the money to use. The only problem was that I wanted to give this money selflessly. I didn’t want it to be perceived that I’m trying to buy some kind of favor. Perhaps I was greatly over-thinking it, but it was also typing numbers into a computer. Between the two, I delayed just long enough for the campaign to finish, so it was no longer an option.

Finally, I decided on a local charity, Lucy’s Hearth. Here’s their stated mission:

“Lucy’s Hearth is a 24-hour emergency and transitional shelter for mothers and their children who are homeless due to economic hardship, family crisis, divorce, eviction, and severe shortage of safe, affordable housing. The primary goal is to foster independence and help the residents gain the life skills necessary to prevent future chronic homelessness.”

Does that sound like a good enough charity to you? It did to me. Rather than typing credit card numbers into a keyboard, I went down to Lucy’s Hearth. 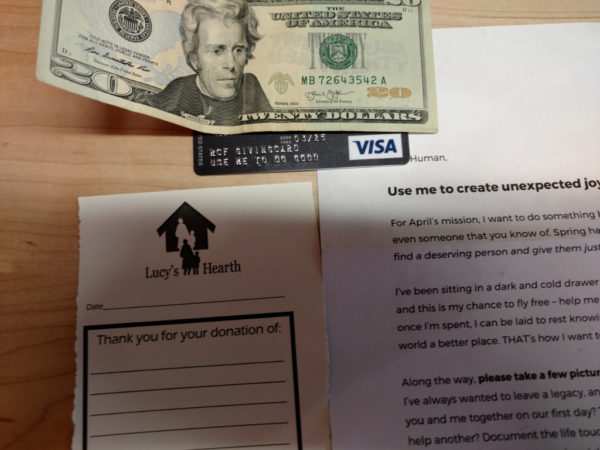 If that picture is a little confusing, it’s because I added $20 of my own cash from my wallet to match Rockstar Finance’s contribution. They forced me to take a donation receipt, but it’s small enough that I don’t think I’ll claim it.

I offered to go pick up some supplies for them. They said that they were already going out later that day and it would be just as easy for them to add it their shopping and get some extra things. I figured that they are better better experts at buying what they need than I am, so I handed the money over and thanked them for what they do. They thanked me for the donation and everyone got warm “fuzzies” for a bit.

I wonder if I technically failed in doing what the letter asked. It asked that I use it to bring “unexpected” joy. The people at Lucy’s Hearth receiving donations don’t consider it unexpected. However, the women and children they help probably find it unexpected. And I’m hoping that a place to stay with some warm clean sheets brings them joy.

How and where would you have used the gift card? Let me know in the comments.