This is this year’s third, and likely final, installment of a series of humblebrags frugal grocery shopping wins. Some readers probably saw this coming after Rich Chicken, Poor Chicken and Rich Pig, Poor Pig. The titles are a parody of a financial book you may have heard of. The idea is that the rich shopper is mindful of the deals, often loss leaders from grocery stores. The poor one is not. There are always exceptions and some extremely high earners might be better off spending their time at their job. This is a generalization.

Before I dig into the details, I need to apologize for not having a meatier financial article (pun intended!). I understand that the “save on” articles can be disappointing especially when you can’t join in. (There’s still time if you live near a Shaw’s in New England.) I’m stretched quite thin with my wife (finally*) deployed for hurricane relief and the annual FinCon conference later this week. I now have an idea of what single parents go through. If you are a blogger going to FinCon, I’ll be the catatonic guy in the fetal position in the corner of the room. Please stop by and drop your business card. I’ll get back to you around mid-November.

On the right, you can see my receipt. One theme here is that things seem more expensive than they should be, but with the sale the price is back to being a deal. Here are the items I bought before we get to the main course:

Bring on the Meat

The next section is the big deal. Somewhere around 15-20 years ago, I set a rule that I wouldn’t typically pay more than $1.99 a pound for meat (including pork and poultry). There were plenty of good deals to be had at that price. For the last 5-8 years, I’ve had trouble finding red meat at that price. Due to inflation, I should have just raised my target price. However, it’s tough to justify when you can score chicken and pork even cheaper than $1.99.

The top round London broil and the top round roasts were on sale at $1.99/lb. I’d say it is a once every 18 months kind of deal… maybe even more rare. Keeping with the theme of overpriced retail prices, I’m not sure $6.99/lb. is what people really pay. As you can see, I loaded up on around 17.5 pounds of meat. Once again, having a chest freezer (or 2nd freezer of any kind) saves money.

This is also where I offer my wife the soups as penance for having stocked up on too much meat. She thinks I get a little carried away with these deals, and she’s not wrong. However, before this shopping trip, I cleaned out the fridge and freezer. I re-organized it so that we can focus on eating down the older food first. I even started in on that process while she’s away.

There are a couple of other notes on the receipt. I earned some gas points. Until recently, there wasn’t a participating gas station near me, so these meant nothing to me. Now, I’m going to have explore this. That 1% back isn’t exciting. I get 6% back with my Amex Blue Preferred card. They are additive, so the extra 7% in total is nice.

Finally, you’ll see a $5 off of $50 coupon. Shaw’s mailed that to my house a little while ago. I usually do 90% of my shopping at Aldi, so I didn’t think I’d get to $50. This is another reason why I bought the soups and chips.

In total, I spent $48.80 and “saved” $119.18. While it may look like it took a ton of planning when you read this, I just glanced at the first page of the weekly deals and found four items that caught my attention. I was in and out of the grocery store in about 15 minutes. Cutting and freezing the meat took more time than that.

The biggest savings will come from cooking at home rather than going to a restaurant. If we eat 8 ounces of steak a meal, that’s 35 meals at a dollar a piece. I’ll have to make some side dishes, but those are usually even cheaper. While cooking at home vs. going to a restaurant is always an unfair comparison, this deal gives us variety which is another reason to stay home. Sometimes we just want something different than chicken and pork. One trip to the restaurant might be more than this entire shopping trip.

* It was a 6 week process of waiting by the phone for a call that says you have to be at the airport in 4 hours. It’s great to get closure of the standby status. Now we are moving forward in the process and even have an end-date of the deployment.

True story: Some people call me McFly as a nickname. I was never a fan of that nickname. I prefer the nicknames my gradeschool friend gave me – M.C. Farms or Drumlin. They caught on for a few years, but didn’t follow me to college.

Also, nobody calls me chicken:

Today is the exception, I’m chicken. Well I’m not really chicken, but I have a lot of chicken. 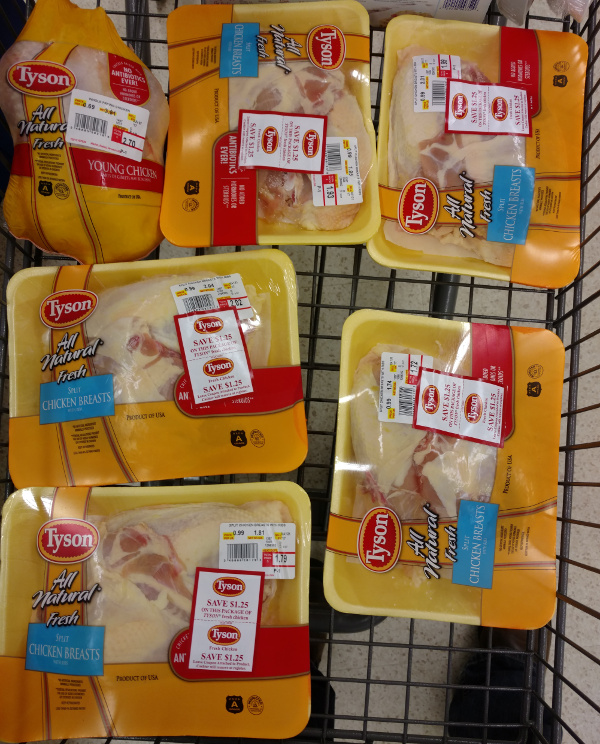 To my wife: I’m sorry. I know we agreed we should eat down the food. I can’t control myself when it comes to a deal. What am I supposed to do when the grocery store practically throws me food for free?

The whole chicken on the left is $0.69 a pound. Yes, there are bones, but we could easily get a couple of meals of the $2.70 I paid for the nearly 4 pounds. If we broke down the math, I think it would be cheaper than dog treats for my dog… and he likes chicken a whole lot more.

That’s not the chicken I’m looking to write about in this image. I grossly overpaid for that whole chicken.

It’s the rest of the chicken that is worth writing about.

A quick look at the label shows that these packages are $0.99 a pound, much more than the $0.69 I paid for the whole chicken.

However, Tyson wants to give me a $1.25 discount on each package.

Thank you Tyson. I accept your offer. This table sums up the deal.

There were packages priced around $3.00, but the key to the deal was to buy the lowest weight (and priced) packages. The packages that were around 1.75 pounds were 50 cents.

I’ll throw this chicken on the grill with some BBQ sauce and it will be fabulous. If we eat 2 pounds of chicken per meal, we’ll spend less than $0.75 cents on what is typically the most expensive part of the meal.

If grocery stores are going to give me chicken this cheaply, they can call me McFly until the cows come home. I won’t be needing cows anyway.

What’s going on with chicken? How can this be so cheap?

If this article seems familiar, you are probably thinking of my Aldi find: Rich Chicken, Poor Chicken.