I couldn’t help the pun (which I think I subconsciously from a friend).

Last week, I presented our couch conundrum. We were looking to choose between 3 sectional and one sofa/loveseat pair ranging from $999 to $2800. Our biggest need was something durable and easy clean due to the heavy wear and tear of a dog sitting business and two toddlers. Our research said that leather was the best answer (fabric was not).

Another requirement was a console with a cup holder. It sounds silly, but I’ve spilled many drinks attempting to balance them in a corner of the couch.

Two options came from Bob’s Discount Furniture and two from Jordan’s (I think mostly a New England chain). Friends and family suggested that Jordan’s had higher quality. However, their prices are often $4,000 and up, while Bob’s can be less than half that. I looked for a couple of reviews of Bob’s and found a ton of YouTube videos from customers showing the furniture falling apart in a couple of years. The two from Bob’s were eliminated.

Before we had eliminated Bob’s, I had made the leap to thinking that a traditional sofa/loveseat combo would be the best fit for the room. It would give us flexibility to move them around and I think it just “fit” the room better. (You’ll see when we get to the pictures.)

Readers also gave me some advice not to buy the floor model… especially because we were looking at getting power recliners. It makes sense that the motors will have years of use on them. The couches from Jordan’s that in our price range (around $2000) were in the clearance section. They were floor models.

So we back to the drawing board.

I had read good things about Raymour and Flanagan on a thread about Bob’s. My wife said there was one close and a Cardi’s near that. (Cardi’s is a popular Rhode Island chain, more on that later). We went to Raymour and Flanagan and long story short, every design had one major flaw, wrong fabric, no console, didn’t pass the wife’s sitting test, except for one. Of course that one was around $4000, but it had motorized headrests and adjustable lumbar support (I hadn’t seen this). Unfortunately price eliminated it (unless we wanted to save a lot longer).

We decided to pop into Cardi’s, because it was right there. I eliminated Cardi’s early in the process because their website is the worst. It could be upgraded by having flying toasters and excessive use of the blink HTML tags. Truthfully, the website looks fine, but trying searching for leather sectionals or power-reclining sectionals. You can’t. You can only look at a page like this with 12 images and really helpful descriptions such as “2-pc sectional” (sarcasm). Then you have to click on each one to bring up the page with that couch. Then you have to click on the details on that page only to be disappointed that it comes in polyester. You have to navigate dozens of pages with dozens of images that would take hours and hours.

I’m getting mad even typing that last paragraph, because EVERY OTHER furniture company offers simple filtering options so that you can look at the 4-7 that fit what you are looking for.

However, as we walked in, we found that nearly every couch was almost a perfect fit. We went from being too picky to find one couch to having too many options. We narrowed it down to two couches and then went home to sleep and think about it. I wanted to pass along the two couches to friends and family and see what they thought, but as the salesperson explained:

“The website is really terrible. We have a full-time person whose job it is to simply look though the website when we need it. I suggest you take a picture and use the search functionality for the SKU number.”

When I got home the search for SKUs of either couch came up with no results.

(Seriously, Cardi’s if are reading this, please reach out to me. I’m local and I developed websites for billion dollar companies that were much more usable. I realize the huge amount of irony in writing that your website is the worst in a blockquote that can barely be read by human eyes. Might as well have a rock fight in my house built of very thin glass. I’m working on slightly small scale and budget.)

Two days later we went back and pulled the trigger on a new couch. I’m writing this article from it right now. Here were the two options we considered:

There was a sofa/loveseat combination with a cup-holder console in the loveseat side. All five seating areas (even the middle of the sofa) were on independent electric recliners. No one would fight for the reclining seat and we’d have the most flexibility when it came to rearranging furniture.

The console was especially nice with a real power outlet (very rare) and a couple of USB (common). The power outlet would come in handy for charging my computer or a blender (don’t judge me for making frozen drinks in my oasis!)

Price: $2900 – It’s more than we wanted to spend, but our expectations needed to be reset once we eliminated Bob’s Discount Furniture.
Financing Promotion: Interest-free financing for 72 months.

A traditional sectional that she really liked the feel of. It had classic good looks and two recliners, one at each end. However, it would cover-up a window, because it isn’t a perfect fit.

The console was terrible with only USB and place to plug-in a blender for making frozen drinks.

Price: $2200 – That’s as good of a price that we had found on real leather. It was a close-out, clearance, down from their MSRP (probably inflated) $3900 and from the typical $3000 price it sells for.
Financing Promotion: Because it was a clearance, it was only eligible for interest-free financing for 12 months.

Because this is a money site and I like to get mathy, one of the first things I tried to do was adjust the financing options. There’s value to us to extend the payments interest-free as long as possible. I just didn’t know what that exact calculation was. Oddly, no one on the internet had thought to build a calculator for something like that (or at least my half hour of searching came up empty which is very rare).

I decided to work it backwards. If inflation is 3% a year (or if I could get that return on my money which I think is reasonable) $2135 would become the $2200 price of the wife’s preference in one year. Given the same inflation/return projection of 3%, I would need only $2425 to get to the $2900 price of my preferred couch in 6 years. Thus I figured the real cost adjusted for financing to be $2135 vs. $2425.

So it comes down to my awesome 5-recliner, awesome console, flexible room furniture vs. the 2-recliner, non-blender-friendly, unyielding behemoth that my wife liked for a little less money.

How did that happen? My wife used a simple combination of logic and emotion in a powerful argument. With the sectional we had for years, we’d all be together. A dog or a kid may sleep on our lap. My wife actually used our dog as a comfy pillow earlier tonight (he didn’t mind). It’s a family being together.

I realized that if we went with my choice, I would be in the loveseat separated by a console (which I guess makes it just a “seat” as there isn’t much love in it any more). It’s great for working late at night, but poor for being close together.

Within a minute of her saying that we were filling out the paperwork. It wasn’t for a few hours that I realized that couch we settled on was almost the same in style and in price to the 2nd option at couch conundrum. This is the couch that readers overwhelming suggested was the best fit given the preferences I stated. Score 1 for the readers and I thank you for all your feedback. It was extremely helpful

I’m going to end with some pictures simply because I have them and don’t know where else they’d fit.

Couch in the showroom. 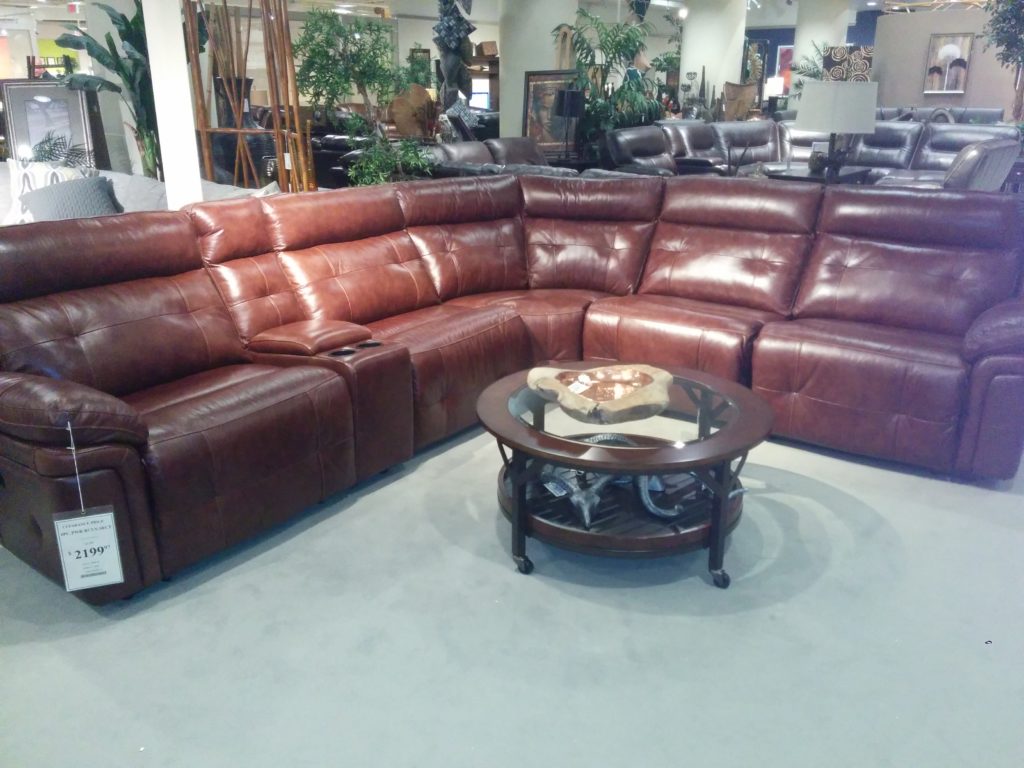 Some details on the price tag: 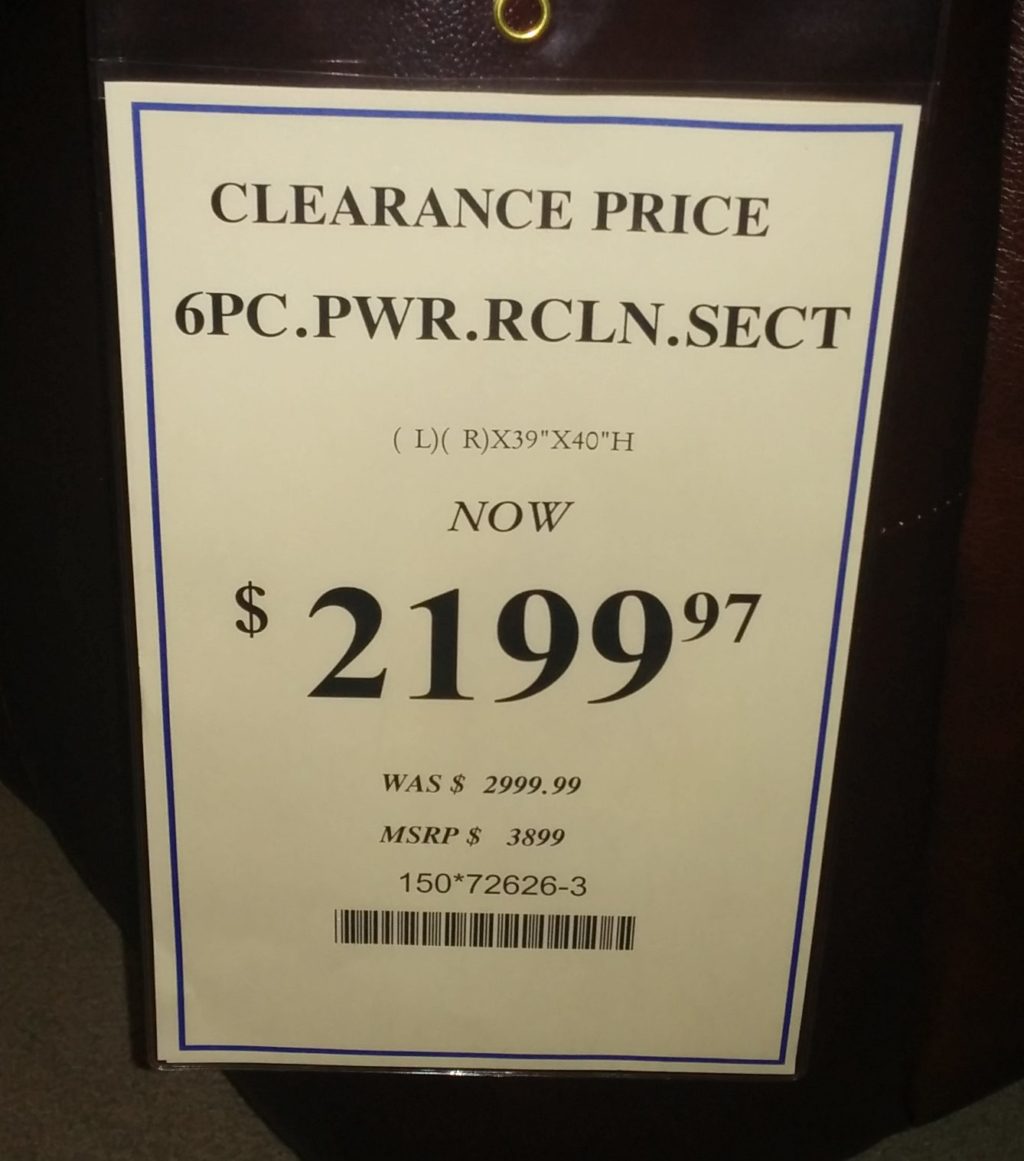 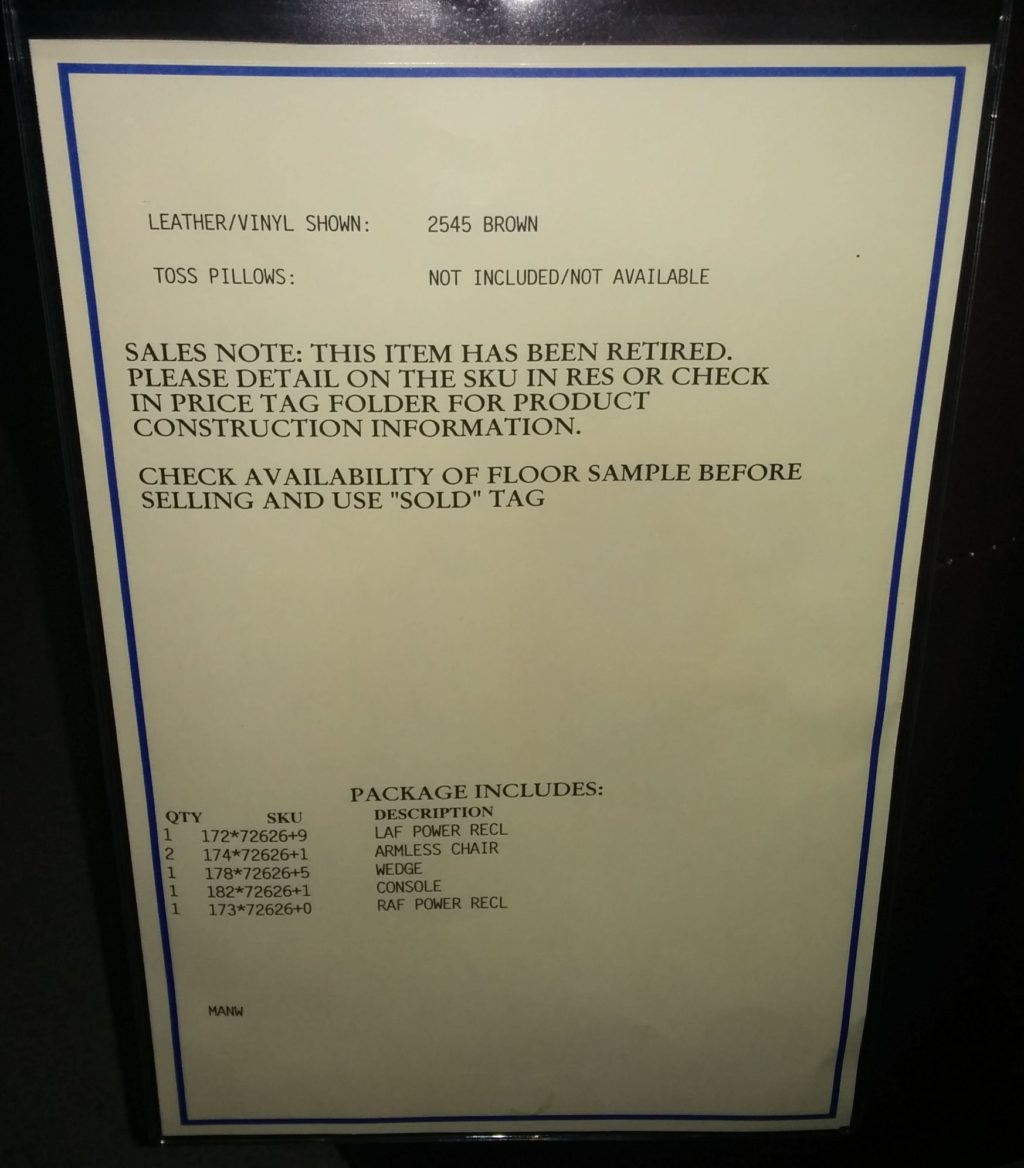 Note that it is vinyl on some sides and back, which saves money vs. 100% leather everywhere.