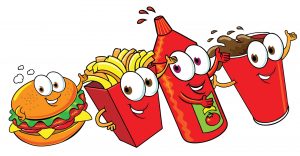 We’re in the middle of a Christmas crunch. My wife was deployed for a month and got back on the 18th. The construction crew that we’ve been trying to get here for months booked us for the 20th (that’s today as I’m writing this). They’re finishing our basement, so we were up at 5 AM moving the last stuff. They needed a lot more moved than we had anticipated and it’s our main storage area. It’s also our staging area for wrapping Christmas presents. Throw in decorating for Christmas and we’ve been listening to The Twelve Pains of Christmas on repeat.

With all that going on, there’s at least one thing that I haven’t had to worry about much lately. Every fast food restaurant wants to give me free food. If I planned it well, I could probably feed two people on a couple of dollars a day.

All of this food isn’t free in the sense you just walk up and say, “Give me some food free” and they say, “Here you go.” You have to spend some money and then they give you additional free food. The key to all this free food is downloading the apps. I’ve got the McDonald’s, Burger King, Wendy’s, Subway, and Taco Bell apps on my phone. I use Taco Bell and Mcdonald’s the most.

Taco Bell is my go-to app for two reasons:

1. Taco Bell has the best value menu of all fast food restaurants that I know.
2. I have a lot of money stored in gift cards from when they had a deal of “buy $20 in gift cards, get $5 free.”

For $1, the beef burrito delivers a tasty 430 calories. This month, they’ve been offering a deal each day that involved spending $1 and getting a free menu item. It’s often another taco or something like that. One day, I had to take my son to the doctor and the deal was a Doritos Taco. He’s a big Doritos fan, but not a taco fan. He loved it though. Aside from the obvious health problems of eating fast food, it was a good meal for a dollar.

During this time, we’re also earning points to add up to rewards (more free food) in my account.

McDonald’s has been offering free food via its app as well. Some of the deals are underwhelming, but every now and again, they offer a great, I-can’t-believe-this deal. They have recently had a bunch of a “spend $1 and get [X] free.” I’ve gotten a couple of free crispy chicken sandwiches that way. I usually spend $1 on a super large Diet Coke, but they have a value menu that would net you another food item as well. It would be a stretch to call it a meal for two, so adding some healthy foods at home would help fill it out.

McDonald’s reward program seems is trash though. The points are always expiring on me. I would have to go much more often to make the reward program worthwhile.

For months Subway was offering a free sub with a promotion code. That was a tremendous deal because $7 would be enough to feed my wife and me for a long time. I would usually eat half my sub and then a few hours eat the other half. I didn’t have a pressing need to eat 1,000 calories in one meal. Now the app has “buy one, get one 50%.” That’s still a decent deal.

They are currently offering a free 6-inch sub with a purchase of a $25 gift card. That’s not a tremendous deal, but it stacks with the above 50% off deal. You could even buy it with a restaurant rewards card and get another few percent off.

Back near the start of the pandemic Wendy’s was offering free breakfast Baconator sandwiches just about every week. I had to make a purchase then, but it was easy to find something cheap that my kids or wife would eat. Looking at the app now, they have a free any size fries with purchase, free small chili with purchase, and free Baconator fries with purchase. There are a couple of other deals, but that’s the free food. It’s not great.

Burger King’s app is junk right now. I hadn’t used it in a long time and fired it up just a couple of days ago. The best thing on there is $1 onion rings. Fortunately, they have a tremendous chicken nugget deal – 8 pieces for $1.49, which is great for the kids.

We all know that eating fast food isn’t healthy. Some options are healthier than others, but in the world of free fast food, you can’t be picky about health. It’s important to note that fast food is a sometimes food. That’s fine though, because free fast food is only around sometimes.

Free fast food seems to be around more often in the holiday season as companies compete for your money. However you can usually find some available year-round.

Do you have any fast food hacks, even if they are not free food? Let me know in the comments.