I don’t typically get the time to watch too many movies. Well, with a 4 and 5 year old, I’m on top of most of the “G” rated ones. Last week, I made it a point to hit my local Redbox and catch a movie I had wanted to see since Christmas, Downsizing. After a discount code they texted me, I had to shell out a little more than 50 cents.

I won’t blame you if missed the movie. We’re all busy around the holidays. In any case, here’s the trailer:

In this fictional world, scientists create a way to shrink people to around 5″ through a process called cellular reduction. As the trailer explains, “$52,000 translates to $12.5 million” when you are small. A city of people can fit in a normal backyard. The same city can share a couple of apples. At the end of the trailer, you see them filling up a pitcher from a bottle of Absolut vodka. (This scene wasn’t actually in the movie.) 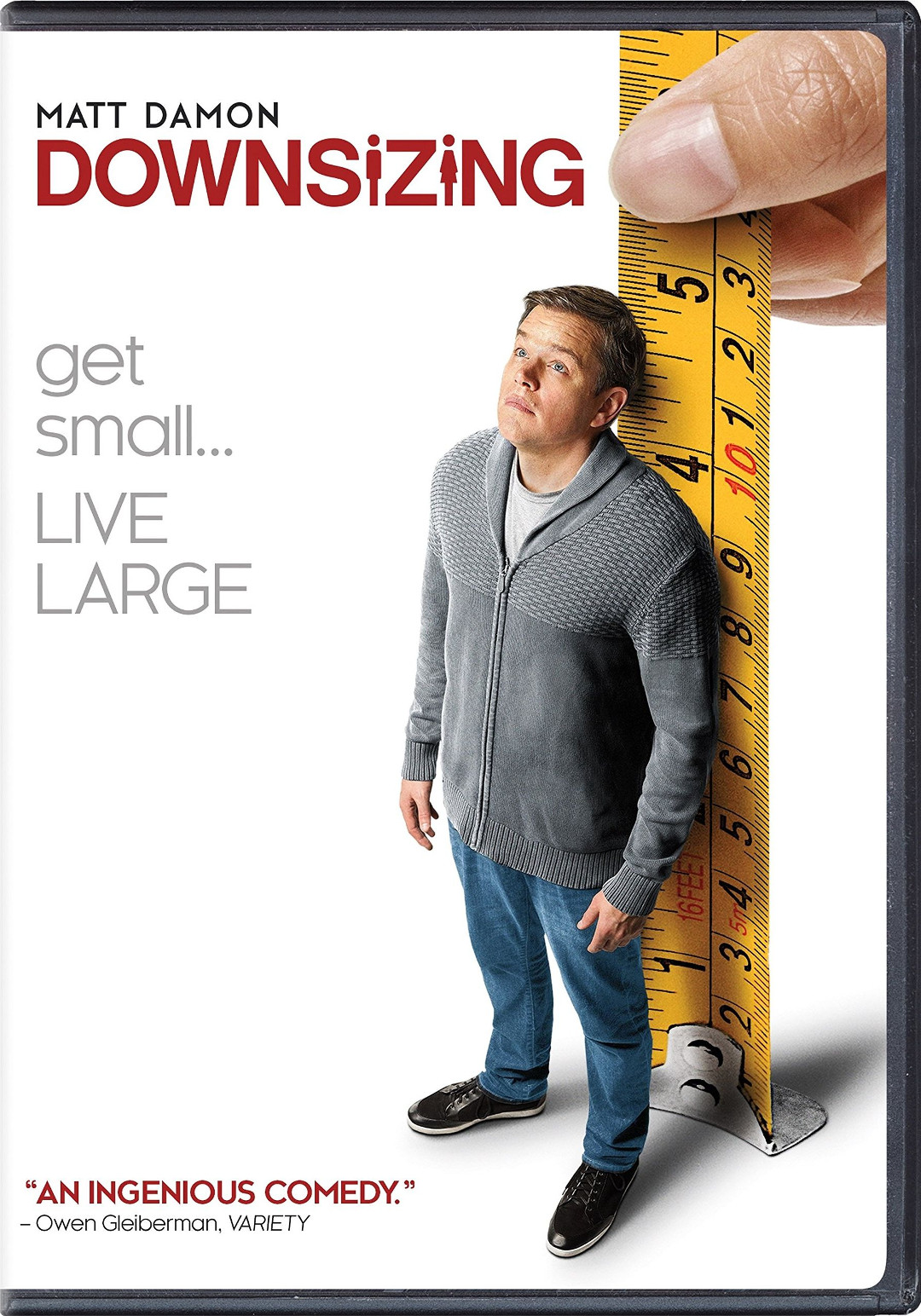 I’m going to interrupt the financial explanation of Downsizing. In the spirit of Earth Day, this movie does take a strong stance that Downsizing is the best way (perhaps the only one) to save human life on Earth. And now back to the financial aspects of the movie…

The main characters, Matt Damon and Kristen Wiig, decide they are going escape the rat race and get downsized. With the equivalent of $12.5 million, they can retire in the lap of (small) luxury.

It’s a great premise. Unfortunately, this alone doesn’t necessary make for a workable movie. There needs to be conflict, a plot, and things like that.

The trailer covers about the first 25% of the movie that sets up the premise. After that, the movie could go in almost any direction… and that’s exactly what it did. The last 75% of the movie didn’t rely on the Downsizing premise at all. It could have happened in normal-size world with very few edits.

Here’s part of the review:

“I’m here to tell you that everything you think about this movie is wrong. Cowriter and director Alexander Payne (Nebraska, The Descendants, Election) takes that intriguing concept and inexplicably flushes it down the toilet… The second-half execution is an epic fail, nonsensical in its plotting and disturbing in its venom for other human beings.

Characters are tossed aside. Sturdy plots are tossed aside. Even the visual gimmicks go away. We clean up the mess. The chaotic zig-zagging story (written by Payne and Jim Taylor) goes to new places with wild, irresponsible abandon. This is a would-be hero’s journey in which everybody is the villain. Damon is pathetic, not sympathetic. Waltz is even more despicable. You will not care about any of them.

This is exactly how I felt watching the movie.

Since Downsizing was no longer the Financial Independence/Retire Early (FIRE) movie that I was expecting, my mind wandered off on many tangents. Here are a couple of the thoughts I had:

The biggest thing my mind kept going back towards were the inconsistencies. They make a point that the Downsizing process requires removing teeth and hair. After being Downsized, dental implants are put in and hair grows back (eventually). I’m not sure why hair cells wouldn’t shrink. I’m also not sure teeth would behave differently from bones that do shrink. (Note: The movie review above says it was just teeth with metal filings, which makes more sense.)

The shrunken world amazingly has cellphones and HD televisions. The cell reduction technology can’t work on these, so it seems that 2-inch screens with 2 million dots is cheap.

That may sound nit-picky, but it plays into bigger questions in the movie. Sometimes making quality small things is expensive. I suppose that small people could be making small ovens and refrigerators. However, the downsizing pitch is retirement on a relatively small amount of normal US dollars. Maybe people in extreme poverty can get downsized and perform labor for what we might consider a middle-class lifestyle? I wish the movie explored these types of questions.

The real shame of Downsizing is that it would be a better fit for a television show. The core concept can lead to numerous story lines. These story lines could actually be related to the act of “downsizing” unlike the movie itself.

For those looking for a mainstream movie about FIRE, the search continues.

[The above article may contain affiliate links]