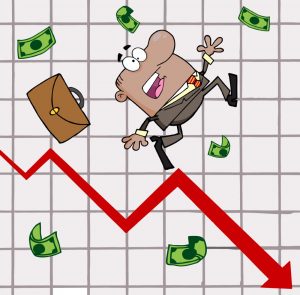 It may be time to prepare yourself for this stock market bubble to crash. Have you looked at your investments lately? Some people say that it’s good to just set and forget it with a few index funds and steady automatic deposits. Twice a year, check the asset allocations and see if they need to be rebalanced.

That advice should work well for most people. It doesn’t work as well for someone who writes about money nearly every day like me. I look at the stock market a lot. Overall, I know I should be invested in the stock market for the next few decades of my life. This is one of those times that I’m finding it difficult to stay invested. Last January (2020), I realized that in the previous decade our investments had quadrupled. That made me nervous that we might have a market crash. COVID hit, and we did have a short market crash. Now our investments are up another 40% from there.

I like seeing the big numbers when I log in, but now I don’t want to lose them. How do you stay fully invested and still prepare yourself for a stock market crash? That’s what I wanted to explore today.

Is the Stock Market in a Bubble?

In my opinion, the stock market is in a bubble. I’ll make a case with a few examples below, but it’s important to understand that this is my opinion. There are plenty of expert opinions out there who say that the economy is doing very well and it’s only looking brighter with summer and more vaccines. (Of course, there are the new variants of COVID, so maybe not everything in the future is looking rosy.)

For now, let’s just assume that the stock market is in a bubble.

What Causes the Stock Market to Crash?

The stock market can collapse for quite a few reasons. The usual themes are people being overconfident that the stock market will make big returns (sometimes 20% or more) year after year. Here are some of those reasons why a stock market crashes.

One reason stock markets can crash when people feel like they simply can’t lose money. That’s when people make crazy bets that make no sense. There were a lot of these around 2000 when internet stocks were all the rage. You can see some of this today with meme stocks like GameStop. Or as the kids say today, “STONKS, only go up!”

Sometimes people borrow too much money and have trouble paying it back. This is what happened in the sub-prime mortgage crisis in 2008. (There was more to it, but this is the simplified version).

In the 1929 crash, people borrowed money to invest and when those investments stopped making money, it collapsed.

That’s a big word for what I like to call “juiced markets.” Certain economic policies by governments can create a favorable environment for buying stocks. Recently, we’ve had a big combination of these with quantitative easing, low interest rates, tax cuts for corporations (allowing them to buy back stock to boost stock prices).

These “juiced” market conditions help the markets go up and stay up. However, it’s hard for them to continue forever. It’s just not sustainable. When things go back to normal there’s a risk of a drop in the stock market.

Fortunately, the United States is in a fairly good place politically. I don’t think we’re going to get involved in any wars soon and we’re building back relationships with our closest allies. Also, to some degree, the world is united to fighting a common foe, COVID.

Sometimes one or more of the above things cause the market to go down. When people see this, they get worried that they are going to lose their money and start to sell. This can cause prices to go down further. The snowball effect of selling and low prices grows and grows.

“When is the Stock Market Bubble Going to Crash?”

I’m so happy you asked this one. My kids ask questions like this and I answer them, “On one of the days that end in -day.” I’m full of bad dad jokes that annoy them to no end.

The truth is that no one knows when the stock market is going to crash. My crystal ball has been at the repair shop for years.

However, if I were to try to read the tea leaves, I’d say that there’s a lot of over-speculation going on. The classic example is GameStop, but you can also see that people have become accustomed to 20% gains for around a decade now. Even when there are sell-offs such as the one at the beginning of the pandemic, they don’t last long because people come in to buy more stocks while they are cheap.

It’s impossible to know when a bubble is going to pop because the market can always go higher. There’s no magic number that signals to everyone, “Start selling now!”

So do you just give up because it is impossible? No. There are indicators that can help you know if the stock market is in bubble territory. Here are a few of them:

My favorite indicator of a possible stock market crash is Shiller P/E or CAPE. It’s the raio of price to earnings. If you look at the graph you’ll see some sharp spikes around certain dates: 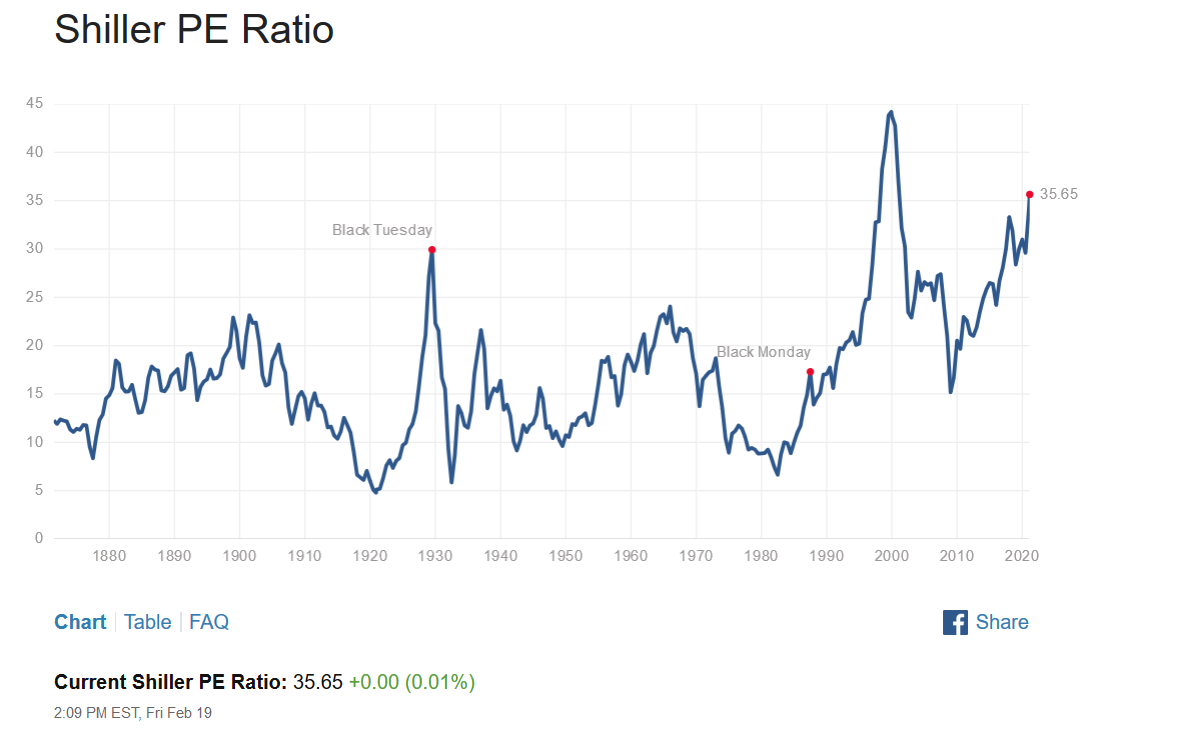 What you may also notice is that the stock market doesn’t stay above 25 for long without a crash… except for the last 5-6 years. We’ve been averaging being above 30 during that time.

A case could be made that there’s a “new normal” of stock investing that wasn’t available in the 1920s or 1987. I can believe that argument, but I think that pushes the market to a 25 P/E. Another line of thought is that earnings are low due to the pandemic and that prices are looking forward to the future when they recover. I can believe that as well. You can even blame TINA.

However, these are all justifications for what we can see clearly, stocks look historically very expensive.

Again, this doesn’t mean that a crash is coming tomorrow, next week or even within the next year. The market could continue to go up for a long time. However, it seems historically likely that you’ll have a chance to buy stock cheaper than this within a few years.

Another way to measure whether the stock market is overvalued is to use the Buffett Indicator. This is the ratio of total US stock market valuation to Gross Domestic Product (GDP). The website Current Market Valuation has a great graph of this over time. 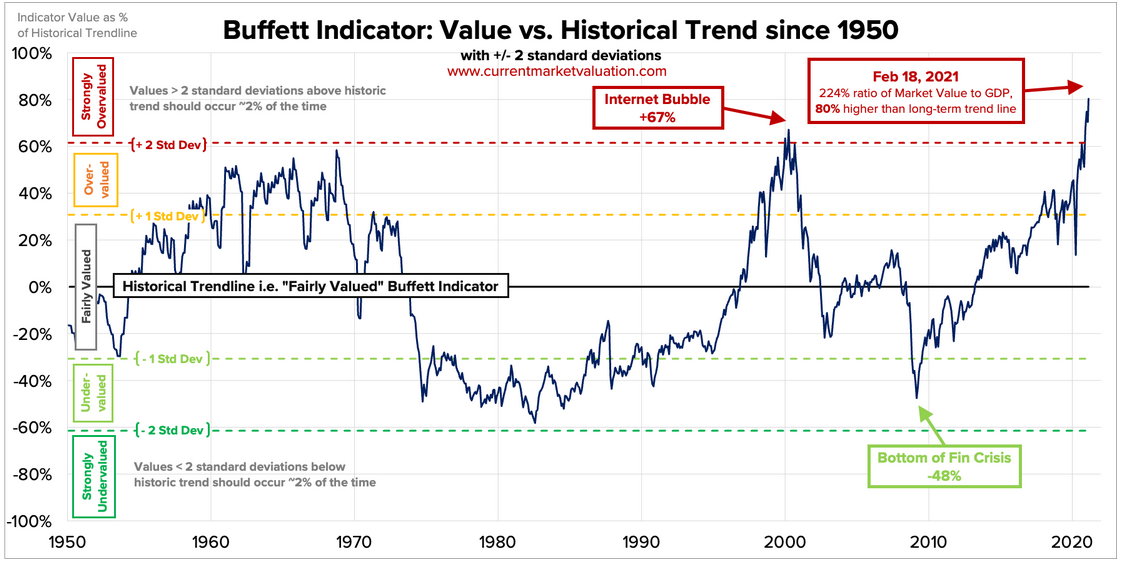 The (much oversimplified) theory is that if the stock market has gone up a lot and we aren’t producing more product, that’s not a great sign over the long haul. The website above does a much better explaining it in detail. It also explains that the markets may be particularly high now due to low interest rates and other “juiced market” factors that I mentioned above.

As you can see the indicator shows that the stock may have been more overvalued than it was in the dot-com bubble.

There’s a third indicator based on household equity percentage. I don’t have a recent chart of this. The first two indicators were enough to validate what I was feeling. More information on this can be found at that last link.

How to Keep Your Money Safe in a Stock Market Crash

I’ve been fortunate enough to have blogged through the 2008 crash. At that time, my wife and I were 30 years old, with decades of earning and investing. Here are a few tips that I’ve learned and what I’m actually doing with my money now.

This is said so often that I feel like people take it for granted. It’s good to have broad-based index funds. However, I often see people focus their investments in the United States. There’s a whole global economy out there and some stock markets may not be as juiced as others.

Additionally, the main index funds for the United States have a lot of technology stocks. I love technology, but I saw how they crashed in 2000. I don’t see a similar thing happening to Apple, Google, Amazon, Microsoft, or Facebook, but a lot of those stocks are under heavy pressure from countries all over the world simply because they’ve become more powerful than the governments of many countries themselves.

This may be a good time to explore REITs, gold, maybe even a little bitcoin. I’m a big fan of REITs, but not so much the other two. With people doing more work from home, I’m less excited about REITs that may have office buildings.

Last February, I sold off some stocks and bought more bonds – but it wasn’t much. I was still about 90% stocks and 10% bonds. I wanted to preserve those big investment gains of the previous decade. When the COVID crash happened, my portfolio dropped a little less than the major stock indexes. It was still a very big drop. However, I was able to sell off the bonds on the way down and buy more stocks until I was about 100% stocks. Now with the stock market at new records that move looks to have paid off.

What I’m going to do differently now, is have more than 10% bonds. It’s hard because bonds aren’t paying good interest rates now. It’s still the best way I know to stay invested and not lose your shirt in a stock market crash.

I took a large amount of the money that I typically allocate to the United States total stock index (an ETF under ticker symbol VTI) and moved it to a high-dividend ETF under HDV. HDV has less technology and more boring companies that tend to make money and pay dividends. I think this is a more defensive way to invest.

Unfortunately, HDV wasn’t ideal to protect against a COVID crash because it has some big oil companies. If it had been around during the tech crash of 2000, I think it would have done a lot better. It likely would have done better during the Great Recession of 2008-2009.

Do you think the stock market is going to crash? Do you actively look at or think about these things (or is it just a personal finance blogger thing)?

(I realize I may have shifted from “my” and “our” portfolio a lot in this. I actively manage my own portfolio while my wife passively manages hers. Only at our monthly net worth meetings do I have visibility into her side of things. It’s further proof that passive investment is just fine.)