This is a very quick post today, because I think it is going to sell out. I don’t mention deals very often here, but 3-4 times a year, I make an exception.

I’ve long been a fan of the Amazon Fire HD 10. I was able to get a pair for a little less than $100 (one would have been $100) and they’ve been perfect for my kids. I don’t know how I would have survived the hell of distance learning without them. I certainly didn’t have a plan to buy laptops for a 6 and 7 year old – even iPads would have set me back nearly $1000.

I have one for myself and it’s great for anything that I would do with my phone, but with a bigger screen.

Today’s deal is for an Amazon Fire HD 10 and Show Mode Dock for $70. (You may have to be a Prime member to get the deal.) There are a couple of things to note. First, it’s the previous generation, which is the version I bought a couple of years ago. The latest ones are a little faster, but not much else is different. Secondly, it’s refurbished. In my experience, Amazon’s refurbished products are very good. Finally, the Show Mode Dock generally runs around $50 or $60 by itself.

I’ve wanted a Show Mode Dock for a long time, but I could never justify paying half the cost of the device to add wireless charging at an angle as a photo frame. My 2011 HP/Palm Touchpad could do that and the dock was very cheap. Amazon has lowered the price to $38, but that’s still too much for a $100 tablet in my opinion.

I have to be honest, I’m jealous that some reader out there is going to be able to get the tablet and the dock for $70. I can’t justify buying another Amazon Fire HD 10 so this deal doesn’t make sense for me.

I’d move quick on this one. It probably won’t be around for long.

(As with all products I mention on Amazon, I may earn a small commission if you take advantage of this by clicking on a link in this blog post.) 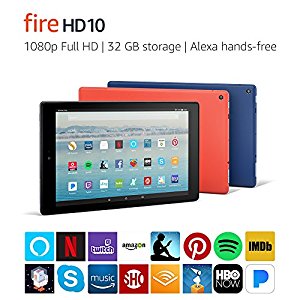