It’s no secret that the US stock market has been going up for years. It’s had a couple of short dips, but the sharp upward trend since 2009 has been unmistakable.

The higher it climbs, the more I get worried. As a value investor, I like to buy stocks when they are cheap.

Cheap is a relative term, but the best indicator I’ve found is Shiller PE or CAPE number. Here’s a graph going back to 1880 from Multpl.com: 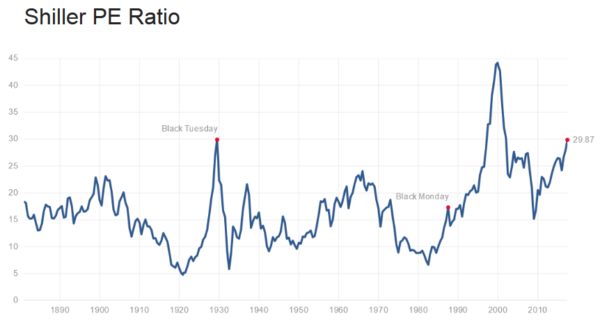 Do you notice anything about what happens when the number gets high? I’ll give you a hint, look at the only two times the number passed 30. We had the stock market crashes of 1929 and 1999. It got up to around 27 before the crash in 2008.

In the immortal words of Captain Malcolm Reynolds, “So here is us, on the raggedy edge.”

Now the number could go up to 45 like it did in 1999. It could even go higher. However, just looking at the graph, it seems like anytime it is above 25 there’s a coming in a year or two. We’ve been above 25 for awhile and spiking to 30 is giving me cause for concern.

So what makes this time different? Other than the Shiller PE number reach 30, I don’t have a great answer.

I’m not pulling out of the US stock market. Instead, I’m looking more at my asset allocation. I’ve always been a fan of international investing as you can tell from this 2007 article. A lot of experts would cringe at the idea of putting so much of a portfolio in overseas funds.

I think there’s no better time to embrace international investing.

The Shiller PE numbers in many countries are a lot lower than the United States. There may be obvious political or economic reasons for that. However, in general, they represent the kind of value that I’m looking for when I invest.

I’m going to adjust my portfolio so that I’m invested in more of the lower Shiller PE countries. I’m willing to put even more than 50% of my stock allocation abroad. (Not much more, but technically a little more.)

I’m making two other changes that I didn’t think I’d make at this stage in my life (early 40s). I’ve always been a very aggressive investor who believes that 100% stocks is always the way to go. (Notice how sure I have been in the past.)

For the first time, I’m putting money in bonds and REITs. Specifically, I’m buying Vanguards’ BND and VNQ ETF funds. I’m putting about 10% of my portfolio in BND and another 5% in VNQ. Perhaps I should have done this before now. I’m thinking about upping those percentages as well.

I would sum up my thinking as, “Let’s play more defense than I normally would given what appears to be an overpriced market.”*

What do you think of this market? Are you doing anything differently than what you’ve done before?

Let me know in the comments.

* For football fans, I’m calling more big nickel defenses and playing less of my base defense.