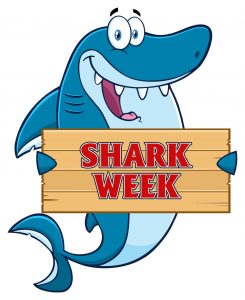 The Shark Week* theme continues today after a couple days of a break. Earlier this week, I wrote that I bought a shark.

What I didn’t say is exactly how expensive they are. I mentioned that a tank was nearly $2000, but it’s still on the small side for even a small shark.

Unfortunately, it looks like I may have bought the wrong type of shark because it continues to grow and get bigger and bigger. That’s not a good sign. I should have done more research before, but as my 7th-grade algebra teacher used to say, “Failure to plan is planning to fail.”

How Much Does a Shark Cost as a Pet

The Wall Street Journal had an article from a few years back about how the super rich are getting into shark ownership. It’s available by subscription only, and because my shark is so expensive, I can’t afford a WSJ subscription.

Instead I found an attempt on Quora to price the cost of a shark. This person says that a small shark would cost about $50,000. I know a guy named Sam who told me not to worry about the costs and that he’d set it all up for me. Come to think of it that seems a little shady.

I called up Sam, and indeed, I was on the hook for a lot of money… PLUS a ton of interest. I hadn’t even had the shark that long.

I knew there was a reason why I didn’t like Shark Week. At least there’s no possible way this could get any worse!

In the interest of full disclosure, these Shark Week articles are meant to be satirical. I didn’t really buy a shark. There are so many logistical problems with even owning a small shark. Our town’s small aquarium has one, so I’ll visit it instead.

* This is NOT sponsored by the Discovery Channel.