Editor’s Note: This article was originally written about Digit, but they charge a monthly fee now. I suggest you use Dobot which works almost the exact same way, but without the fees. You can read my Dobot review here.

A few days ago, I was in the car with my wife picking up the kids and this song came on the radio. I turned to here and said, “I guess it’s time to wake up.” Fortunately, she got the joke right away.

October hits me in the back of the head like this song. Metaphorically, of course, because I’m still typing this article. It’s the start of the last quarter of the year. Everyone is in a rush to put up Halloween decorations, while I get advertisements from my local grocery store to plan my Thanksgiving through them. I bet some of the warehouse stores already have rolled out some of the Christmas stuff.

In other words, this song is going to happen soon. And if you celebrate another holiday that might be around the same time.

(I promise that this article won’t have reference any more song titles… or maybe not.)

Years ago, before credit cards, people turned to Christmas Clubs to save money for the gift-giving season. If you aren’t familiar with Christmas Clubs, I won’t hold it against you… they were before my time too. Here’s how Wikipedia describes them:

“The Christmas club is a savings program that was first offered by various banks in the United States during the Great Depression. The concept is that bank customers deposit a set amount of money each week into a special savings account, and receive the money back at the end of the year for Christmas shopping.”

I don’t know how much money you are you going to spend this Christmas, but the average is around $900. You could spend more or less, but can’t we agree that it’s best to put aside money now?

I’ve found that easiest way to do this is with a Digit Dobot account. Regular readers know that I recommend EVERYONE get a Digit Dobot account. I even recommend personal finance bloggers get it. One said to me, “I save money all the time and I’m great with it. I don’t need that.” He ended up following my advice and saved around $4000 for an expensive international trip. He said he didn’t even notice that the money was being saved.

Digit was a FREE service (it isn’t anymore) that squirrels away money from a savings or checking account. It analyzes your account balance, spending, upcoming income, and upcoming bills to figure out how much it can safely move to the Digit account. It does a little at a time so you don’t even notice it. You can always tell it to squirrel less, but I set it at the maximum squirrel rate. (If you think I’m trying to set the record for using squirrel as a verb in a paragraph you are correct.)

Perhaps the worst part of Digit is that it will take you 3-5 minutes of your day to set-up. I’m being sarcastic. The worst part is that you earn minimal interest on your money. There aren’t a lot of banks paying significant interest nowadays. I’m used to ignoring interest after years and years of receiving almost none from bank accounts.

I’ve had my Digit account since March or April of 2015 and I’ve only saved this much: 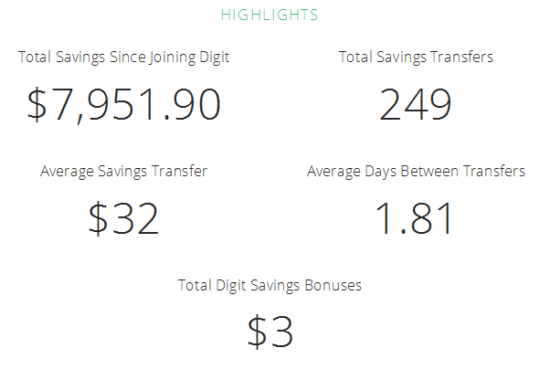 I should have waited until I got that “snowman” for the first digit, right? Oh well.

Keep in mind that I’m saving the maximum amount and my finances might are different than yours. You can customize it to save what works for you. That’s why I feel it will work for everyone. No one has given me a convincing argument NOT to sign up for a Digit account other than, “I’m comfortable with my savings process.” That’s fine, but I’d challenge the person to try something new. They might just find out it was better than their existing way of doing things. I did.

I also have withdrawn money from my Digit account. My car needed new brakes, so I simply sent off a text to withdraw the money and it was back in my account in a day or two. If I hadn’t set up Digit, there’s a real chance that I would have spent it.

Forced savings is one of the most powerful forces in personal finance.

My recommendation is to Digit Dobot now so you’ll be prepared for the holidays.