I ended up signing up for this deal. It was a terrible mistake as I ran into one customer service headache after another. I’m working on writing an article explaining my problems (as of 5/7/2018).

Today, I have a deal for you that I myself am very likely to jump on. Also, I don’t make a penny if you jump on it or not. That’s an extremely rare combination in the personal finance blogging world nowadays.

When I started this blog in 2006, I had an awesome Sprint SERO plan which was $30 for voice/text/data. Then the iPhone and other smart phones created a path for mobile companies to up the charges as they built up their networks. It wasn’t uncommon for my wife to have a bill over $100 when all the taxes and fees were added in. 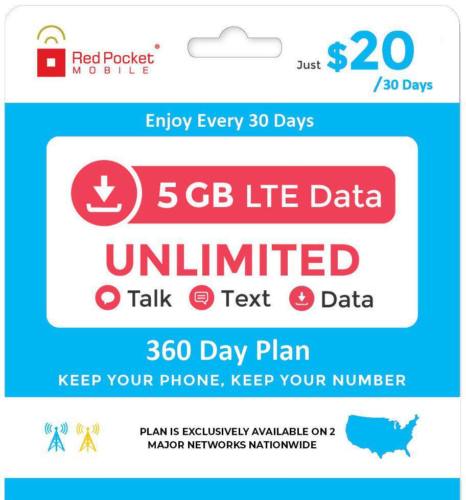 Fortunately, we are now back to the days of cheap cell service. My wife is on Straight Talk at around $40 a month. I’m on Cricket for $35 a month after an autopay credit. (Getting her to switch has been on the never-ending to-do list). Both use the AT&T network, which we find is the best for us.

Last year, I tried a Mint Sim. I immediately got a bunch of spam text coming in. I failed in that experiment. I never wanted to carry around the cheap cell phone with me, especially when it meant it being the second cell phone. Mint Sim runs on T-Mobile. If readers find that to be their ideal network, it might be worth looking into, especially at a price where $15-20/mo. paid yearly would suit most users.

However, if you are interested in AT&T (the best GSM network in my opinion), I think I’ve found a great deal. While it also works for Sprint, deals on that network are a dime a dozen. If that network works for you, you might be able to score a better deal.

The deal I’m talking about is Red Pocket 360 Day Prepaid Wireless Phone Plan. This is a limited time deal through their Ebay store. For an upfront price of $240 you get a year of Unlimited talk/text/data with 5GB of LTE data (before throttling). That comes out to $20/mo. This is using the same AT&T network that I’m already on with Cricket, so the service should be exactly the same.

At $20/mo. this is even cheaper than my cellphone service was back in 2006. Inflation-schminflation.

Let’s get to some potential “gotchas”:

There are a lot of user comments on this Slickdeals page. You’ll find that international calling is free and it does support tethering (which is extra on Cricket). A few of the comments came from former Cricket users who said that their coverage was the same when they switched. That’s as you’d imagine as it’s the same network.

What do you think? Is it worth giving Red Pocket Mobile a try?

P.S. Here’s a cool thing I learned recently. You can check from whom the spam text is on Short Codes. For example you can search 622622 shortcode if you get a text from 622622.