I love it when people ask me what I think about something. Unfortunately, I’m a little like Adam Conover in Adam Ruins Everything with the answer. If you don’t watch the show 1) You Should* 2) His character is essentially a human version of Brainy Smurf.

A week and a half ago, Our Next Life asked the following on Twitter:

See how low I’ve set the bar for “asking me” a question. You can literally just @ LazyManAndMoney@lazymanandmoney me on Twitter. (I prefer it if you send me an email, but I’m not picky.) It doesn’t even have to be a real question. Give me wo words, a link, and my name, and I’ll run with it. Plus, when you reach out to me it gives me something to brag about at my Thursday night support group with Adam and Brainy.

The article in question is this one on Business Insider: “An investing legend who’s nailed the bull market at every turn sees no end in sight for the 269% rally.”

Clickbait title? Check! I’m already sucked in. Or, as my Twitter response said:

So who is this investing legend? I gave it away in the title (you were paying attention, right?): Laszlo Birinyi.

When it comes to legendary investors, I think of Warren Buffett, George Soros, Bill Ackman, Ben Graham, Peter Lynch, etc. I’ve never heard of Birinyi, but I’m always looking to learn something new. I decided to check out his Wikipedia page, but it’s very sparse compared to those legends. That said, it’s much bigger than my non-existent Wikipedia page. I just fail to see how the “legend” title got bestowed on him.

The article starts off with a bullet point: “Laszlo Birinyi, the investing legend, has nailed the eight-year bull market at every turn, and he sees stocks continuing to rise going forward.”

How much does a 8-year bull market “turn”? Just about every personal finance blogger I have read believes in a “buy and hold” strategy that I agree with. Did we all nail the eight-year bull market at every turn? If so, are we all legendary investors?

One of the earliest statements of the article is:

“The legendary investor and president of Birinyi Associates has repeatedly nailed his predictions since the start of the bull market. He was one of the first analysts to recommend buying after markets bottomed in March 2009 and has remained a stock enthusiast as the S&P 500 has nearly quadrupled.”

Those are some powerful claims. Unfortunately the author didn’t cite any reputable sources so we can’t verify them. If the claims were true, it seems like it should have been easy enough to cite some examples, right?

I’m going to turn my attention to what I think Mrs. Our Next Life was asking. I had written that this is probably the time to try to time the market because the Shiller P/E (CAPE) numbers are historically high. When I say “time the market”, I mean adjust an asset allocation to be more conservative and/or invest in markets with more reasonable valuations.

In the Business Insider article, Birinyi had this to say about about valuations:

Yes, they’re high, but since 2009 we’ve become enchanted by what everyone calls Shiller’s Cape. We went back to the 1980s and found that in an entire 10-year span, there was only one mention. This isn’t a law that’s been in existence ever since the New York Stock Exchange has been around. We weren’t even aware of it in the last cycle. My argument against the whole thing is: It’s never gotten you in the market. We can catalog a bunch of articles that show no one’s ever said to buy. It’s always been “The market’s overpriced,” “The market’s expensive,” “The market’s high,” but no one’s ever said buy. In July 2009, there were some articles saying that according to some valuation measures, the market was fully valued. In July 2009! To me, something that’s never told me to buy is not something I’m going to listen to when deciding when to sell.

Just so we are on the same page, this is what we are talking about: 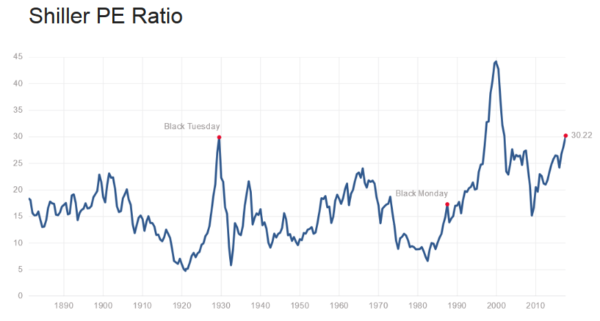 As you can see the chart goes back to 1880s. It is roughly the price/earnings ratio of the S&P 500. We’ll get into the history a little more in a second.

My first problem with Birinyi’s is that he equates Shiller’s P/E with the popularization of it. It’s like saying that we became enchanted with the idea of gravity after Sir Isaac Newton. It’s worth noting that the basic idea goes back to 1988, but the analysis seemed to come around much later (seems like 2013), perhaps after 2009 like Birinyi says.

If someone gives a great new tool that works wonderfully would you throw it in the trash just because you didn’t have it 5 years ago? Birinyi’s logic seems silly to me.

Finally, he goes on a rant that he can catalog a bunch of articles and “no one’s ever said buy” in the last cycle. He apparently missed Lazy Man and Money, because my October 2008 article getting ready to buy some stock** certainly takes that stance. The S&P 500 was around 900. And while it wasn’t an exact bottom, it was a better time to buy and hold than July 2009.

Unfortunately, I don’t think Shiller P/E was available in 2008 for me to use. If it was, I didn’t know about it. However, take a look at the Shiller P/E chart and think about Birinyi’s statement of, “To me, something that’s never told me to buy is not something I’m going to listen to when deciding when to sell.” I look at the chart and say, “Wow! Stocks are the cheapest they’ve been in 20 years!” Who wouldn’t want to buy stocks when the S&P 500 was around 350?

Moving on with the article, Birinyi starts to make a little more sense, but only because we set the bar very low above.

“As for what we’ve done, we reached our objectives for the first six months at the end of June. So we wrote at the end of June that we would be buying the September 29 S&P $250 call — in other words, we were looking for 2,500 by the end of September. And this was not just a comment; we actually put money on the table. We’re now at that level. [Note: The index closed at a record high of 2,498.37 on Wednesday, the day before this interview.] There’s absolutely no change in our view that the market will continue higher.

Once the market goes above 2,500 — which hasn’t happened yet — we will be coming up with a new target, because we think this is a market that’s ideal for taking small steps rather than looking out 12-18 months. There are too many moving parts, such as North Korea, which we’re not going to try to factor into our process.”

I can’t hold back the snark. The best time to reach your objectives for the first six months is usually the end of June, right?

At the end of June the S&P 500 was 2423. The market is up around 3.25% since then. That’s not a bad call of the market going up 3.3% in a couple of months. However, that’s very much the same pace the market has gone all year. It’s not exactly going out on a limb to say something that’s gone this way for 6 months will continue to do so for the next 2 more.

What’s more concerning to me though is that he’s taking an arbitrary round number like 2500 and using that for his reasoning to reevaluate. I’d be much more comfortable if he looked at the Shiller P/E and said, “If this gets above 30, we feel the valuation of the market is too high.” That seems to me lot like looking at the stock’s price and saying, “$100 a share is too much! I don’t care what the earnings per share are!”

This next one contained a stunner, but you’ll miss it if you don’t dig a little deeper.

“We looked at ETFs. I don’t think people really appreciate or understand a lot of the ETFs. Do you know what the fifth-biggest stock in the technology ETF is? A telephone company. When you say you want to buy tech, are you OK buying telephones?”

First we have to figure which ETF he’s talking about. There are a few ETFs that cover technology, however, since I own one, I thought I’d look at it’s holders. Here’s what’s in the XLK Technology ETF. The 4-5th biggest holding is actually the Alphabet (just two different classes) and should be combined to be the #3 holding. If we look at the 5th biggest holding, it is AT&T. Presumably, this is the telephone company he is referring to. If not, it is a strange coincidence that the most popular technology ETF happens to have holding related to “telephones” as the 5th largest holding.

So the stunner here is his statement of “are you OK buying telephones?” I don’t consider AT&T’s sales of telephones to be their business. I think of them selling mobile voice and data plans or maybe as the owner of DirecTV and that business. I don’t know if they’ve made and sold phones in years. It’s scary to me that Birinyi may consider AT&T a company whose core business is selling telephones. For his investor’s sake, I hope he was referring to some other technology ETF and this was a mistake.

However, even if it is a mistake, do you know what the #1 holding in the XLK technology ETF is. It’s a company called Apple. Do you know what its biggest product by far is? A telephone! And yes investors have been very happy buying telephones over the last ten years.

There are some good ideas and concepts in the article… but nothing that I can say I found particularly insightful. Instead, I found myself coming away with more questions than answers about these red flags. What do you think? Was I unfairly harsh in my criticism? Does Birinyi’s logic make sense to you?

* Seriously, it’s up there with Crazy Ex-Girlfriend for my favorite show over the last two years.

** Use the dates in the comments. When I update an article (such as to fix a typo), my system replaces the date with the most recent edit. I’m working on fixing that.