This is the first edition of Kid’s Corner. I hope to do use one or two Fridays a month to write about issues of money and kids.

That’s probably the worst headline I’ve ever written. It’s terrible. What ARE these @#$*!$% thinking! 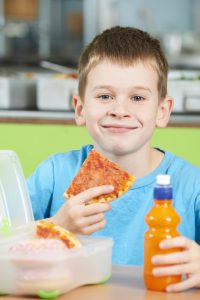 We’re the villains in our own story. Yep, we’re pure, pure evil.

Let me tell the tale of how we arrived at such a dastardly act.

Every day we pack a lunch for our kids school. You could say it’s the typical brown bag lunch, but we of course use reusable bags nowadays. Our kids are picky eaters (aren’t they all?), so it’s taken awhile to find some foods that they’ll eat. Figuring out what they are going to eat each day takes more hours than I care to admit.

We often sacrafice nutrition for our sanity. One such compromise we make is buying Lunchables. We’re not proud, but we are able to supplement them with some healthy foods. At the local military commissary they are around $1.25. That’s a great price compared to what they cost at the grocery store. With the other healthy snacks that they eat at lunch, our total lunch cost is probably around $2 a day. We spend probably another $1 or $1.50 on snacks for before and after lunch at school.

The other day our 7-year-old says that he wants the pizza hot lunch at school. He doesn’t want the spaghetti and meatballs lunch though, because that has tomato sauce on it. I’m sure that every parent is familiar with this kind of logic.

Kid Context: I interviewed my 7-year-old about the differences of tomato sauces of pizza and pasta. It seems that pizza cheese covers up the sauce taste, making it clearly edible where pasta with sauce is not.

If it was as simple as pizza always being safe this story wouldn’t be less interesting. Pizza is a safe food only about 75% of the time. Those are actually very good odds in comparison to other foods.

The hot lunch at school has to be bought by the semester and paid in advance. There are no refunds and no exchanges. That’s the deal the school had to make with the outside vendor to reduce complexity. Essentially we have to make the decision to pay $60 for 10 pizza days to finish out the school year… or skip the pizza all together.

The math is easy – it’s $6 a day for hot pizza lunch. That seems like a lot to me, but I guess that’s what happens when you have to outsource catering because the school doesn’t have a functional cafeteria. Obviously, I’d rather continue to pay the $2 a day, but spending $4 more once a week isn’t going to make a dent in our budget.

That’s what I asked myself. What if he had to put some of his own money on the line? Would he be so quick to throw it in the trash? Would it taste better because he earned it?

Now, of course we wouldn’t make him pay for all $60. We wouldn’t even make him pay the difference. However, one dollar a day could work. He’s good at math for his age, so we could lay out what we currently spend and what the hot lunch costs.

I also want someone who is awesome at graphics to create the chart for me. I’m joking, of course. There are a lot of chore charts on Pinterest, but so many of them are not quite right and customizing them to remove a chore or add a chore is not easy (for me at least).

There are a lot of money lessons to be learned here and this seems like a good time to start laying down that foundation.