I was originally going to use “Forward” instead “Ahead” in the title, but I couldn’t get myself to put “looking forward to taxes” in any form. In fact, a reasonable argument could be made that I’m procrastinating doing my 2017 taxes right now.*

When the Tax Cuts and Jobs Act was passed last year, I planned to write an article about what it meant for our family. I’d love to be able to tell you what it means for yours, but it is very complex and it touches so many areas of everyone’s financial life. Truth be told, I need to see my own tax advisor to get a better idea of what it means for us. (That’s perhaps just the motivation I need to get 2017’s taxes done.) 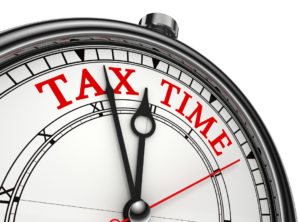 Fortunately, March’s issue of Money Magazine does a decent job of breaking down some of the big areas of the change with an article called “What the Tax Law Means for You.” I was hoping to find the article online, but I could. When I was reading it, I have to admit that I got a little excited. I don’t believe that the new tax law is a positive for America on the whole, but at least it looks like we’ll do well.

The article lays out a number of scenarios that I’ll cover in order:

“You Have a Middle Class Job”

This should save us some money because the double standard deduction and double child credit are probably better than what we’ll have in 2017. This means that we might not have to itemize.

People working for themselves will be able to take a 20% deduction on their income. Like everything with tax law, it isn’t as simple as that, but that’s the gist. It seems that my blogging and dog sitting income fit firmly in this area. This is one of the areas that won’t impact a large percentage of people, but I happen to be lucky enough to fall into this bucket.

“You’re Buying or Selling a House”

That refinance to a 15-year mortgage is looking better. As my father used to say, “Sometimes it’s better to be lucky than good.”

Our property taxes (and other associated taxes should fit well under the $10,000 cap. My friends in California, New York, and Massachusetts are probably not as lucky.

I suspect the double standard deduction will be better for us.

There’s a prediction that our home won’t appreciate as much due to the changes. However, as we don’t intend to sell any time soon, there’s no real immediate impact to us.

In fact, we’ve been saving money in a Coverdell, precisely because they can be used for private schools. Unfortunately, Coverdell contributions are limited to $2000 a year, per child. So if we save $2000 each year for the kids through the first 6 grades, we’ll probably be able to use the Coverdell for the 7th and 8th grades.

The new law allows for 529s to be used, which aren’t limited like Coverdells. This could be good news for some extremely wealthy people. For us, the current cost of private school, saving for retirement, 15-year mortgages, etc. means that we don’t have a ton of money left over to put into a 529 plan.

The other flaw with this is that the money that is going to be used for K-12 schooling doesn’t have a lot of time to compound. Maybe if you put a lot of money in at birth of a child you can get 15 years of compound interest for the last couple of years of private high school. However, at that point, most people would probably be thinking, “This money is best left to compound another year or two for college.”

This feels like something that politicians stuffed in because it helped them or other extremely high-income people.

The point that Money Magazine makes here is that the reduced corporate taxes will translate well to companies’ bottom lines. That’s good for stock prices. So if you are investing in equities for retirement, you might see those accounts go up in value.

We’re a little less than 20 years from being able to access most of our retirement accounts, but the plan is to not touch them for longer than that. I’m not convinced this tax rate will still be helpful 20-30 years in the future. Maybe it will, but I’m not counting on it. Let’s check back then and we’ll see.

In almost every case, we stand to do better with the new tax law. In some cases, like the buying and selling of houses, there may not be any real change for us. In most of the other areas though, we either stand to do better or, get more options (like with the change in 529 plans).

I don’t know how we managed to be so lucky to catch all these potential tax breaks. I’ll check back in when I get more information from my tax professional.

* A better argument could be that my preschoolers are on their two week spring break. We spent a few days at the University of Florida so my wife could complete some graduate work. That was one of the reasons why we hacked Disney World for 5 days… we already had to fly close to there anyway. That was followed up by my wife going to her annual pharmacist convention while I returned back with the kids. Long story short, there hasn’t been a lot of working time for me, anyway, much less time to do taxes.