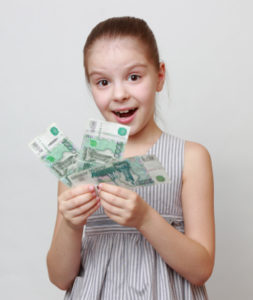 There are lot of good things you can do with the FIRE (financial independence, retire early) acronym, but that title is certainly not one of them. Of course, I mean set your kid on the path to FIRE.

There’s a lot of talk in the media about the FIRE (Financial Independence, Retire Early) movement. You can find several stories of people who retired in their thirties. That level of extremely early retirement has some people claiming that it’s dangerous and too many things can go wrong with that plan over the next 50+ years. For this article, I’d like to put that debate aside. It is a valid debate worth having, but let’s assume you are in the pro-FIRE camp. After all, why else would be here reading this?

Before we get started on whether you should start your kid on the path to FIRE, we have to tackle an important question:

Does Kid FIRE Make Any Sense?

Unless you are Ryan Kaji of Ryan’s World fame, Kid FIRE is unlikely to happen. It’s common sense that most kids won’t be making the big money necessary to support 80 years of living. So, Kid FIRE, on its own makes no sense. However, building the foundation for kids to reach FIRE later in life DOES make sense.

Everyone I know who has been interested in FIRE has always expressed one regret. They wish they had known about it before so they could have gotten started earlier in life. Outside of winning the parent lottery and having Beyonce as your mom, starting out as a kid is as early as you can get.

So what could a blueprint for “Kid FIRE” look like?

Getting your Kid on the path to FIRE

There are many different paths to FIRE and working with a lump of clay fresh-minded human gives you access to many of them. I looked at a few ways to Starting Your Kids on a Financial Independence Path more than a couple of years ago. Two years normally doesn’t seem a long time to me, but it was pre-COVID and, as we know, time after that stopped working normally. It’s also quarter of my kids’ lives.

Here are a few things to start with:

Back then I had mentioned a desire to get my kids interested in cooking. We signed them up for an after-school class. At the time, no one new that everyone would become cooking experts. The kids had a lot of opportunity to learn and it’s gone well considering they are 7 and 9. I love this core life skill because it can save you thousands of dollars in food costs vs. restaurants. Some of my favorite FIRE bloggers (such as Retire by 40 and Root of Good) show off their cooking expertise about once a month.

I’m not handy at all. I can barely fix anything. I wonder if my mother still has those old Time-Life Fix-it-Yourself books. Maybe they help. It can save you a lot of money being able to fix things yourself. It can also be a main career or a side-hustle to make very good money for a few hours work.

However, being handy can shine in other ways. We have three rental properties and it would be great if I could fix everything instead of writing a check. Let’s take it a step further. Carl from from 1500 Days writes about how live-in home flipping built his nest egg. Essentially, he and his wife buy unattractive houses and fix them up while living in them. When they sell, they can legelly keep up to hundreds of thousands in tax-free profits (though usually it’s closer to tens of thousands in reality). They’ve managed to make ~$650,000 over several flips. Of course they have invested that money and it has compounded over years.

The live-in flip described above is one way to house hack, but there are others. The best house hacker I know is Chad Carson and he has a free guide to house hacking. The main idea is to buy a multi-family and live in one unit while renting out the other units. The rent from the other properties, in some cases, can pay for the whole mortgage. In a lot of ways it is like paying for your own home by being a live-in superintendent.

I have Carson’s book Retire Early With Real Estate and it’s a great read. (That’s also an affiliate link, so I’ll make a small commission if you decide to buy it.) There are so many different types of house hacking available and you don’t need hundreds of thousands of dollars to buy a multi-family to get started.

It could get a little tricky, but I think it’s possible to combine the live-in flip with house hacking. It’s obviously going to take a lot of time, but it could lead to significant profits in someone’s early-mid 20s.

Getting and Early Start with Learning About Money

All the above are some concrete examples of things that can help them reach financial independence. However, a couple of weeks ago, I wrote how to teach your kids about money and financial education at a young age can go a long way. My kids aren’t going to be retiling a bathroom, cook us dinner, or hack housing costs for some time. Until then, they can learn about financial concepts, so they build great money habits at a young age.

The ultimate “cheat code” to FIRE is having a high salary. There are plenty of people who make a lot of money and spend it all. However, if you can avoid that trap, and live fairly frugally FIRE finds friendship with you. (I may have went overboard on the alliteration there.)

How do you get to that high salary? Traditionally, it starts with education and choosing a career that pays well. It’s not a secret which careers are the most lucrative. However, nowadays it makes a lot of sense to pay attention to the cost of college. A lot of college debt can push that FIRE plan back quite a bit.

Kids should be kids. It’s fun for me to write about them managing rental properties and swinging hammers, but they’ll have time before those days come around. For me, it will happen in a blink of an eye and I’ll wonder where the years went. It’s important that they enjoy these years.

I like to think that I can push them towards a certain future. It feels like I can because they are still very young. As they get older, they’ll develop their own interests and go down a path that they choose.

I hope that they’ll be interested in FIRE and if so, I think some of these ideas could be useful. If you were trying to create a blueprint for FIRE from scratch, what would it look like? Let me know in the comments.