For the first in forever, I’m at a loss on how much I should spend on a phone. In the past it was an easy decision.

My smart phone history started with a Handspring Treo 180 around 2002. I continued to upgrade to a new Treo whenever they came out, because carrying the internet in your pocket was awesome. (So was SD storage cards to hold videos, which some iCompanies still can’t figure out.) Sprint had a really cheap plan, so everything was great.

Things changed in 2009. That’s when the Palm Pre came out. I continued with various Palm Pre’s even getting an unreleased Pre 3.*

The best part about this upgrade cycle is that you could always sell the old phone on Ebay for around 70-75% of the new phone.

After 4 years with the Pre, I had to finally move on. Since Hewlett-Packard wasn’t going to support it, I had to make the choice that most people do: iOS or Android.

I voted with my wallet. Android won. Apple phones were way too expensive.

I know what you are thinking, “Cool story, bro.” 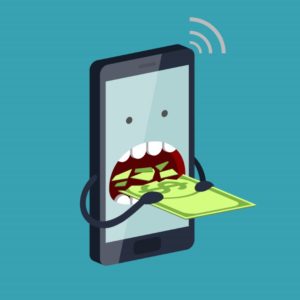 Recently my phone started feeling slow, very slow. My first thought that was it was time to upgrade. After all, the phone came out in 2015 which is old nowadays. However, I realized that the lethargy was likely due to the 100+ Chrome tabs or the pile of apps on it that I rarely use. I deleted a bunch of stuff and now manage just a few browser tabs. That seemed to buy me some time, but doesn’t have the same life it had when I first got it.

That’s when there’s that looming question:

How Much Should I Spend on a Cell Phone?

There are a few reasons why it is more difficult this time. First, there are more phones out there. My current phone was the only phone where I had to actually think about what I wanted and compare specifications and pricing.

The second reason is that phone prices are going up. The introduction of the $1000 iPhone and the $2000 Samsung folding phone disaster creates a lot of room for mid-range phones to charge $500.

However, by far the biggest reason why this is a difficult choice is an odd phenomenon. The choice is between a very good product at a very cheap price and an excellent product that is a lot more money. At first it seems obvious to me that I should go with the cheap option. However, because of how often a cell phone is used, that small difference between very good and excellent is greatly amplified.

For me, the choice is likely between three phones:

While the Pixel 3a is tempting, I have soured on it. It doesn’t feel like a bargain. The Pixel 3 was on sale a couple of weeks ago for $399 and I didn’t bite then. It’s hard to justify spending the same money for the light version today. The good news is that the Pixel 3a may be on sale when I upgrade my phone down the line.

If I had to make a choice today, I’d go with the Moto X4. I’m confident that I could be happy for a couple of years with it. At a price of $60 a year, it would be a very good value compared to some of my other phones. It would also be easy to justify giving it to one of the kids when it’s time to upgrade.

How Much Should You Spend on a Cell Phone?

If you were expecting me to tell you want to do about anything, you’ve come to the wrong place. You know yourself best.

However, I can give you a couple of tips that have helped me. The first I’ve already written about. Looking at a phone as a cost per year may be helpful in making your choice. Some people may feel that $2 a day ($700+ a year) is a reasonable price for all the value they get out of their phone. I think I prefer to save the $500 and put it towards hiring a cleaning service.

The second tip is to consider the purchase in the context of your overall technology budget. I’m a big tech geek (hence the smartphone back in 2002), so I usually spend more than most people. My wife doesn’t care that much, so the low-end laptops and cell phones work for her. If I know that I’m going to spend half my internet on my cell phone, I might spend more on it. However, I am usually around my laptop, so that’s my priority.

We live in an era where cell phones aren’t advancing that much. They continue to get faster, more efficient chips, more memory, and better cameras. There aren’t a lot of new featuers. Some of the more recent phones have embraced wireless charging pioneered by my beloved Palm Pre (celebrating it’s 10-year birthday next month).

For us as consumers, there’s almost no wrong choice. It’s great to have very good phones available for less than $150. That’s the right choice for me, but for the first time in a long time, I understand why people spend a lot more.

* I started up the Palm Pre 3 last year and it still works great. The replaceable battery I bought very cheaply on Ebay allowed me to get all my pictures.