This will be a quick article today. My wife got back on Friday after 35 days of getting shots in people’s arms. Now she’s in the full-spring cleaning mode that she missed and I need to join in rather than typing on a computer. I’m expecting to have April’s monthly review ready tomorrow and then get back to a more normal schedule of posting on M-W, or T-Th.

The markets have been going up, up, up for weeks now. When I did my monthly net worth we hit another record – about the 6th month in a row. They’ve been big numbers too. You’d think I’d be very happy about this, but I’m not. I get nervous when the markets seem to get too high. The Shiller P/E (CAPE) ratio is higher than it has been since the crash of 2000. A historically high number for the Shiller PE is usually 25… it’s almost 38. Here’s a chart from Multpl.com. 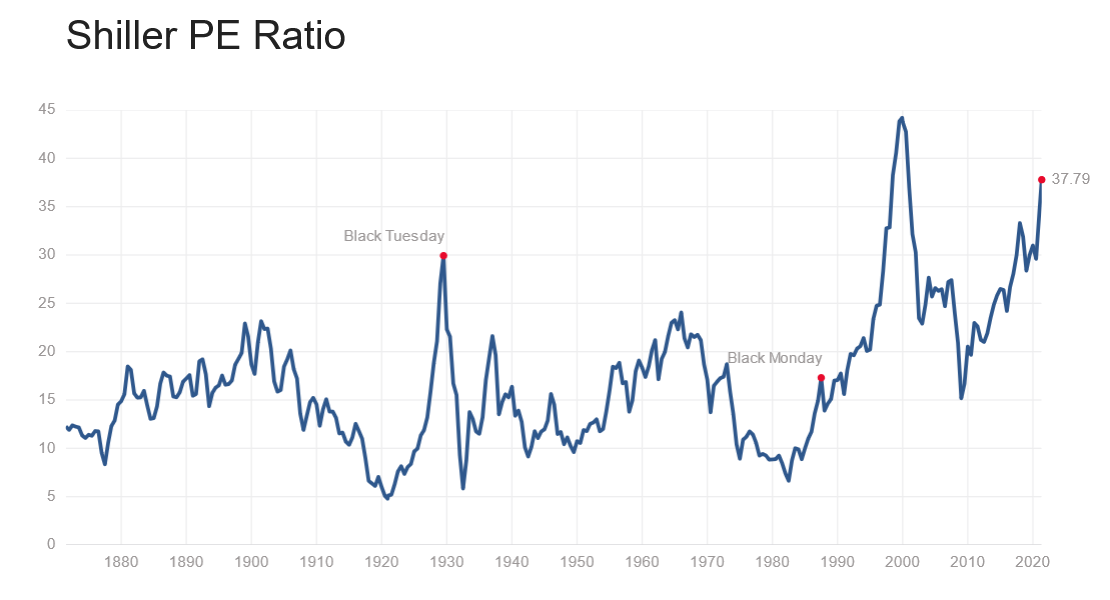 As you can see these kinds of peaks haven’t ended well in over the last 150 years or so. Of course, the stock market in 1904 isn’t close to being similar to 2021 – it’s very different. There’s a chance that things are different nowadays. However, even if you look at the last ten years, the market looks very expensive.

I have an internal conflict when this happens. Since I’m only 45, I want to stay invested for the next few (hopefully several?) decades. The other side of me says to sell high and buy low. It’s hard to be fully invested with a long-term outlook and still believe that the sky is going to fall at some point soon.

So what can you do?

When the market reaching new records, I like to shave off some stocks and put it into bonds, almost like dollar cost averaging. It may be as much a mental thing than a math thing – I feel that I’m better prepared for the next crash. In reality, the move is small, but I can do it a lot and it adds up if the markets keep going up and up.

I don’t shave off too much at any given time. It can be a half or a full percent of my holdings. I also look at stocks (usually ETFs) that are near their highs. For example, VTI (Vanguard Total Stock Market Index), VEU (Vanguard FTSE All World ex US ETF), and HDV (iShares Core High Dividend ETF) are three ETFs that I invest in that are currently bumping up against their all-time highs. They are all candidates for me sell a bit and buy a little BND (Vanguard Total Bond Market Index).

This is basically little more than rebalancing your asset allocation – a common thing that most financial experts would endorse. However, I look at my investments more than most people (probably a couple of times a day), so the psychological effect is helpful for me. Most people shouldn’t be as crazy as I am in checking stocks.