Sorry for the lack of articles last week. I didn’t feel I was in a good place to create something worthy of reading. Without getting too deep into it, it’s been a long, cold, gloomy winter. It probably doesn’t help that everything on the news is like, “If I conducted myself that way, I’d be bankrupt and homeless, but these people are rewarded with millions.” In other not-so-surprising news, I have the emotional fortitude of a wet doily.

The good news is that Spring is here and even though the rainy gloom hasn’t passed, I feel better than I have in some time. It won’t be long until the live music on the beach starts.

It’s fitting that last week felt like the longest week. Almost five years ago to the day, I began and article with, “You might have noticed that I haven’t been publishing much this week.” That’s when I wrote about my experience with the Boston bombings and Watertown capture. (That article is also home to the best of my nearly 40,000 comments.) 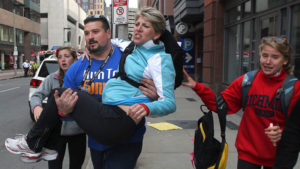 There are thousands of people who have better stories to tell about it, but I still regard it as one of my best articles. I think it showed a slice of life with that slight brush with terrorism.

There’s two other things of note about that week. There are moments you just never forget.

When news of the bombings came out, I remember my wife telling me to get our son at the Navy base daycare. I started to explain that it was probably the safest place, but I didn’t get far. This wasn’t a discussion. The five minute drive to the base couldn’t have taken more than two minutes.

Back at home, my 6 month old noticed something for the first time in his life. While he was used to Baby Einstein and other cartoons, he never noticed when anything in real life was on… just never looked in the TV’s direction. He was glued to the television. Maybe it’s because his parents were? I don’t know. I just know that this wasn’t the introduction to the real world that I wanted for him.

While there are moments you never forget, there are also thoughts that come up now… five years later. I hadn’t pieced it together, but our second boy was conceived just two weeks before the bombings.

I realize that this article has nothing to do with personal finance. (Don’t worry, I’m planning a great tax article for tomorrow.) It’s just that Patriots Day (not related to the football team) has long been an important holiday for Bostonians. It’s worth reflecting on that time of tragedy.

However, let’s end on a positive note. You could probably pick a thousand great stories from any marathon. I’ll choose an unlikely one with these quotes:

“Everybody thinks it’s a terrible idea. Objectively looking at it, if I were looking at somebody else, I’d probably say the some thing.
… Running 26.2 miles is no walk in the park for the average person — let alone a 305-pound lineman who, when he retired from the game in July, couldn’t remember the last time he ran a mile from start to finish.
…
… But the lure of the tradition has always been appealing to Wendell. After playing in New England for seven seasons, he said he felt like the Boston Marathon ‘defined’ the city more so than any of the five professional sports teams did.”

The article: This former Patriots lineman is running the Boston Marathon: ‘Everybody thinks it’s a terrible idea’.

Ryan Wendell is running for the Joe Andruzzi Foundation. Joe Andruzzi another former New England Patriot was out of contact during the bombings and everyone feared the worst. He was just too busy personally rescuing victims of the bombing to respond. (He’s pictured above.)