Our couch is a dozen years old and it has been decided that it is time to move on to a new couch. (That sentence was worded that way because I’m in a denial. Objectively, my wife is right, but there’s no urgency.)

Our current couch is a large microfiber sectional. We have a sizeable living room and a family of five (yes our dog counts in this case). We’ve decided to move away from microfiber. Our dog sitting gig is doing well and we need something that wipes clean easily. Microfiber requires our upholstery cleaner. Even worse, you can’t clean a spot because the cleaned area then looks cleaner than the rest of section. Thus we’re looking for some kind of leather or leather-like material.

I also love gadgets in my couches. We currently have three recliners and a storage console. That was high-tech 12 years ago, but nowadays the consoles have USB-power and cup-holders in addition to storage. The recliners also seem to be powered much of the time. I like that because I fear I’ll chop off a kid’s finger or something in snapping it open and closed. Powered seems much safer. I even saw one couch with a built-in removable tray, that would be perfect for a plate of food or maybe a light-weight laptop. Unfortunately, I couldn’t find another couch with that option.

My wife likes the idea of a chaise lounge to be part of the configuration as well.

This may sound like a lot to ask for, but in looking at two stores we found everything we were were looking for – more or less.

There didn’t appear to be a clear-cut winner and hence the “couch conundrum”. I’m going to explain four of the finalists that caught our eye, give you some pros and cons, and ask for your feedback. I’m listing them in order of most expensive to least expensive.

Bob’s Furniture has something called the Atlas, which is everything we were looking for (except for the black swan tray piece in the console). See the image (click for a larger version.)

My wife sat in the couch and said that it was “the one.” She felt that the couch picked her like Harry Potter’s wand. I couldn’t disagree, it had a great console (USB, cup-holders) and power recliners. Even the chaise reclines to be almost a bed. However, it is $2800 when shipping is included (other stores ship for free.) Friends and family say Bob’s Furniture is of cheaper quality.

Pros: Meets everything we are looking for. Harry Potter’s wand for my wife.
Cons: Expensive ($2800), no deal/promotion, shipping charges, testimonials of lower-quality.

Jordan’s Furniture has a discount area with the couch on the right (click for larger). (Yes, there’s a lost cell phone on the couch, we tried to find the owner.) 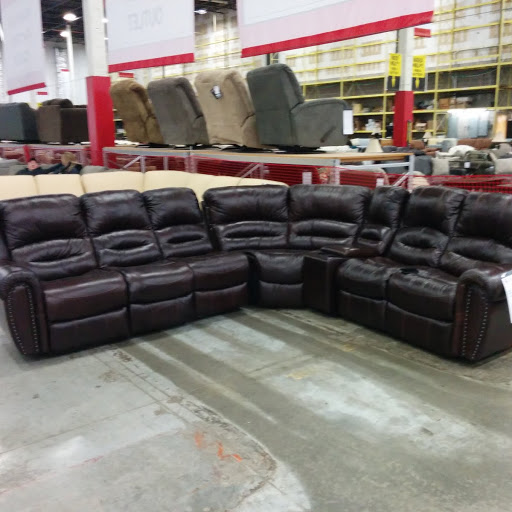 It doesn’t have the chaise lounge, but it does have the main features of the console (USB, cup-holders) and power recliners. This couch normally costs $4800, but this is one of 3 we saw on clearance for $2100… and that includes shipping. These find themselves in bargain bin, because there is a new color for 2017. They might have been floor models, but they seem great. This was my wife’s first choice before we saw the Atlas above with the chaise.

Jordan’s Furniture by all accounts of family and friends has better quality furniture than Bob’s Furniture. Typically you pay a higher price for it, but not on this particular piece.

Pros: Most everything we are looking for, big deal/promotion, testimonials of higher quality.
Cons: Expensive ($2100) and a compromise.

Jordan’s Furniture had another couch in the discount area that caught our eye. (We eliminated the ones in their general area as $4000+ is not what we are looking to spend for a couch.

I’m not including a picture, but it was very similar to the couch above. It lacked a console (and hence no cup-holders or USB) and it was made of microfiber – the one thing we wanted to avoid. However, it did have power recliners. The price is right at $1300. There’s only one of these. We could go back tomorrow and find that it is gone.

The “easy” part of bargain is that it has free shipping. This make more sense when we get to the “difficult” bargain below.

Bob’s Furniture has/had a floor model of their Marco power recliner and loveseat for sale at 50%. That’s a $2000 sofa/loveseat combo for $999. It has most of the features of the $2100 of “The Value” above, power recliners, console (USB cup-holders, storage, etc.). It isn’t a sectional, but that might be a benefit as we could split them up if we wanted to move re-arrange the room.

The biggest problem is that Bob’s doesn’t offer shipping of any kind. You need to haul it out yourself. This would likely mean renting some kind of hourly truck from Home Depot… and driving it an hour to our house. I’ve never done anything like this. I don’t know how cheap or expensive this is.

Pros: Great price ($999), most everything we are looking for (except chaise)
Cons: Not a sectional, logistics of transporting it, limited availability, testimonials of lower quality, floor model that likely has miles on the motor already.

My wife brings up a great point that if we are going to have something for 12 years (or more), we want to be happy with it. I’m a strong believer in that as well. However, I don’t want that to be an excuse to write a blank check. Money is a finite resource.

If we went with the cheapest option, we could use the savings for other projects around the house that we’d love to do. That money would buy that television I’ve been writing about for 2 years now (not that we would, but we could).

As tempting as it might be to go all-in on the Atlas, there’s also no reason to rush on it. There’s no promotion and quantities aren’t limited. All the option have some kind of “buy now” component to make our money go further.