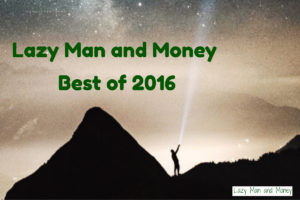 Many bloggers will highlight their most popular articles. That may work for them, but my articles aren’t popular at all. (I’m joking… self-deprecating humor is en vogue, right?)

Instead, I’m highlighting the articles on Lazy Man and Money that I thought were interesting or might not have received as much love at the time of posting.**

That’s it for now. I’m going to turn my attention to making the articles for 2017 even better.

* I use “signing checks” metaphorically. I think I write one check a month.

** I apologize clip-show. My wife’s long-awaited highly-discounted Hamilton tickets from AmEx were this weekend, so I had solo kid coverage. Mother Nature decided to whoop us with a foot of snow. I’m the last person in a snow region who doesn’t own a snowblower, so it was a lot of shoveling. On the plus side, that time with the kids has made me about as fluent in Vegimalese as anyone on earth.