September is always a difficult month for us. There’s often a FinCon, the one time of the year that I travel for a financial blogger conference. My wife’s career has a focus on open enrollment, which ramps up quickly after summer vacations.

This year, I went to FinCon for 5 days. I got back to see my wife for literally one hour before she went on her 6 day work trip. That’s a lot of single parenting. We can make it work because we have some good systems in place. However, it’s difficult to do anything to move forward. We’re essentially treading water. There’s usually a “catch-up” period of a few days when one parent travels.

September is also the start of school. That comes with new teachers, orientation activities, and the extracurricular “stuff.” This year, we did soccer for one kid and Cub Scouts for the other. Cub Scouts is a lot to digest. It’s almost a whole second school. We went from having zero homework for our oldest (Kindergarten last year) to having two sets of homework.

To throw one more monkey wrench into the system, it was also the oldest’s 7th birthday at the end of the month. Around the same time, there was a death in my circle of friends that I had to process. I am perhaps the worst person on Earth dealing with death.

That’s enough lead-in… let’s get to the Alternative Income report.

I’ll mix in some pictures from the month throughout this financial update, because some people find numbers boring. (But not you or you wouldn’t be here!)

If you are a new reader, you’re going to want to refer to my Alternative Income FAQ as you’ll likely have a lot of questions about how I do these numbers.

The last month I reported, August, was the start of this income trending down. We took a couple of weeks of vacation. With travel and play, I didn’t do much work.

September’s dog sitting wasn’t very good either. The busy summer tourist season of Newport, RI is over. Families are back in school, so they aren’t traveling and leaving their dogs behind with me. Blogging income for September was also off. Between FinCon, my wife’s travel, and the start of school, I didn’t write as much as I’d like. Also, some months advertisers aren’t around and this would be one of those months. This is exactly why I like to be diversified across all these income streams.

That’s well below average and not where I’m looking to take things. So far, October is looking a little better, but you’ll have to check back next month to see if there’s a rebound. 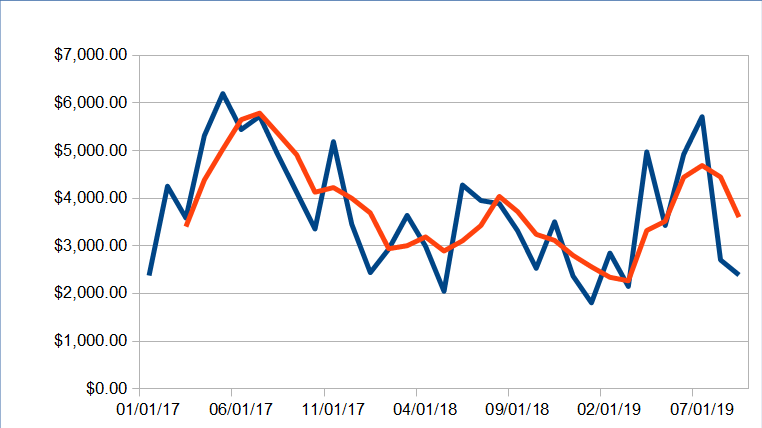 Zillow said our rental properties were worth a little more than last month. As with every month, we also paid off a couple thousand of mortgage debt. That helped us gain nearly $9,000 in equity. Too bad it isn’t liquid, because that would make my blogging and dog sitting income almost irrelevant.

We now have 58.90% of the equity in our properties with a combined rent of $3,325 after insurance, property taxes, condo fees, and estimated maintenance. I like to use that number, because it represents our net gain.

As the years march on, the ratio will grow to 100% of the $3,325 monthly inflation-resistant rent. That’s what gets us to that annual $40,000 income I mentioned in the FAQ mentioned at the beginning of the article.

In the previous report, the rental property income was $1,930. This number always moves slowly as it only changes if one of two things happen: 1) The properties go up in value. 2) We charge more for rent. We’ve got a change of tenant soon, and we’ll be raising rents to match that. In January, I’ll revisit all the assumptions that go into that $3,325 estimate after insurance, property taxes, condo fees, and estimated maintenance. 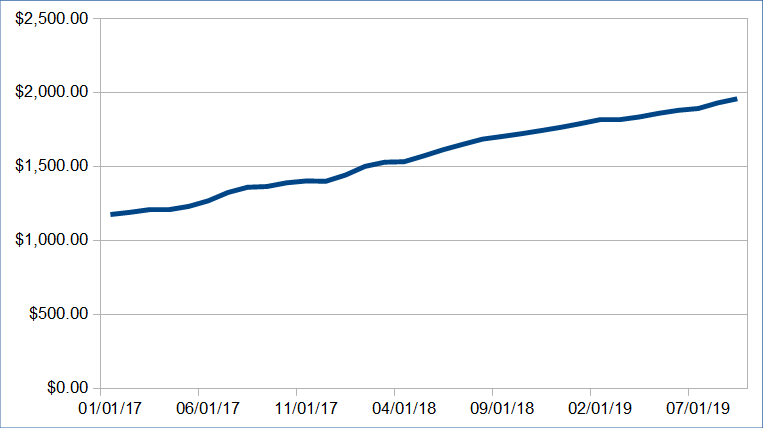 The stocks markets have been pretty volatile over the last month. However, by the time was all said and done our investments were worth almost exactly what they were the month before.

For this section, I generally assume we’ll be able to make a 2.5% dividend yield on our holdings. That could be from a high-dividend ETF or from simply holding strong companies that have a long history of dividend growth. For that we’ll look at making passive income with dividend kings. I’ll get Sure Dividend’s newsletter (this link has a special coupon code if you are interested) to try to get closer to a 4% average dividend yield.

I’ll have a new surprise in this section when I get to October’s results. I’m really excited about it, but I can’t spill the beans just yet. It should be a big jump though.

Last month, it was $1,733, so I can buy one less item at the Dollar Tree. It could be worse. This would be nearly $20,800 in dividends a year. If our mortgage was paid off, this could almost cover most of our necessary expenses alone. We would still have to draw some money out or make more than 2.5% in dividends to be safe. Of course we wouldn’t really need to do that because of the other income streams. 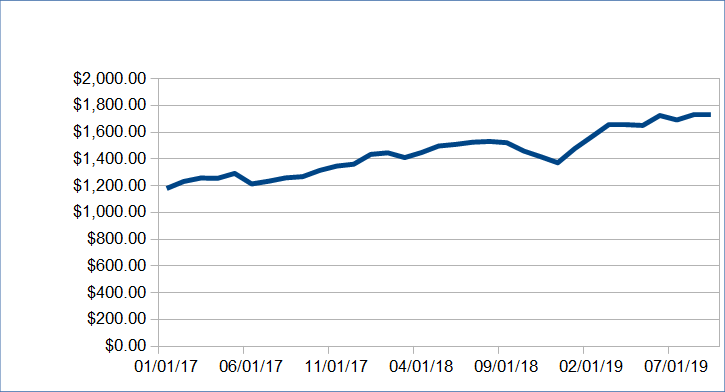 Our “very close to passive income” is a combination of rental property income and dividend income. If there were some royalty income from books, movies, or music, we’d include that here (but my rockstar career hasn’t taken off yet).

Having both types of income working together for us is going great. The diversification gives me great confidence that we’ll be better prepared than most people in the case of an unfortunate event. We’ll still likely get rent checks if the stock market crashes. We’ll still get dividend checks if a tenant is late paying for awhile. Of course a bad economy may impact both at the same time.

Last month it was $3,664, so it’s up $27. Another month, another record! It’s now consistently over the average of my dog sitting and blogging.

It has grown from a combined $2,354 in January 2017. Since then, this has gone from an estimated annual income of $28,252 from these two sources to $44,286. It’s worth noting that, once again, these are fudged numbers that aren’t “real” yet. However, I’m looking forward to 8 years from now when the mortgages on the investment properties (and our primary residence) are paid off. Add in stock market growth (of a conservative 4%) and this number should be “real/non-fudged” $85K/year. 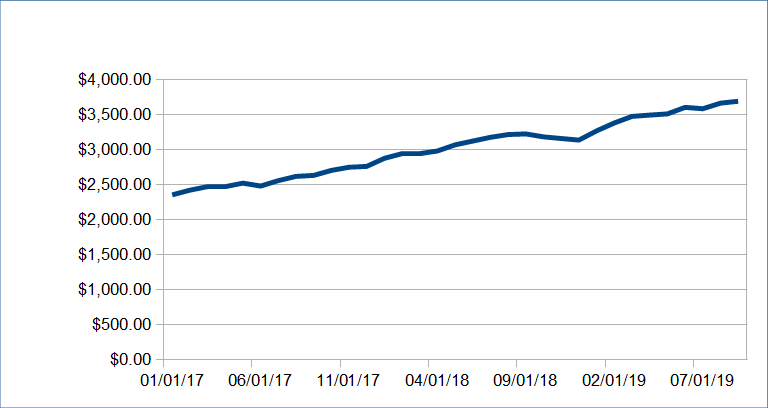 That’s a few hundred less than last month. The passive income of dividends and rentals didn’t quite make up for the low blog and dog income.

That largely hypothetical annual income for writing on a blog, taking care of dogs, and investments feels like a dream. In the long term, $80K+ would be a lot more income than we’d need. Here’s what our necessary expenses for the next 45 years roughly look like.

None of the numbers here include my wife’s bread-winning pharmacist income, her vested military pension (more passive income), or the freelance work I’ve been doing over the last year (which isn’t passive at all).

As always, I’m still hoping to write a book someday – just to add some more passive-ish income. I may tip my toe into self-publishing sometime next year. I would love to talk to a real a publisher, but I don’t want to take on the “job” of writing. That’s probably a deal breaker. If you know someone who I could talk to contact me. 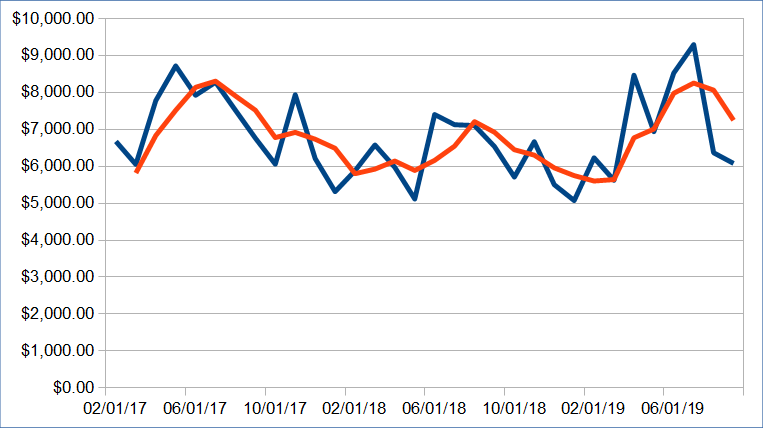 I truly believe that net worth is one of the most important numbers in personal finance so it is worth sharing in some way. Showing relative growth can be useful, I think.

I use Personal Capital to track my net worth and it makes everything easy. It’s free and you should give it a try. For full disclosure, I might make a few dollars if you do. For more full disclosure, I haven’t made a dollar from that suggestion this year so I’m not just suggesting it because I’m getting rich off it.

Our net worth dropped 0.32%. The big reason? We tapped our HELOC for some home re-siding/painting. That was a large check to write. Every year we seem to have one really large expense and this going to be it this year. Hard work, good planning, and very good luck has put us in a position where a big check isn’t devistating. Hopefully, it’s the only big expense this year. So far we have nothing planned for the abnormal big expenses next year. We’ll be plowing any extra cash we have into paying it off.

Over the entire year our net worth is up 25.69%, which is amazing considering it is a sizeable number. About half of that growth was from a large percentage of that was based on a website sale that I had at the beginning of the year. The rest has been simply investment gains and savings.

It’s important to remember that everyone is in a different place in their financial journey. I’ve been blogging about personal finance for 13 years. At age 43, we naturally may be further along in that journey than some younger readers who may be beginning their journey. Don’t be discouraged by some of the numbers above if you are just starting out. Use it as motivation for what may be possible (depending on your circumstances).

There’s a big wild card in calculating our net worth. Now that my wife’s pension is vested, it’s reasonable to ask Should I Include a Pension in Our Net Worth?. I decided that it does make sense to do it. It’s not easy, but I came up with some ways to figure out what a pension is worth. In the end, it seems my wife’s may be worth $2.3 million. However, like most of the money mentioned in this article, it isn’t immediately spendable cash.

That pension would ridiculously dominate our net worth, so I’ll note two separate numbers in my internal spreadsheet. Since I don’t share the numbers anyway, except for these hints, it shouldn’t matter much to you.

How was your September? Let me know in the comments.