It’s almost the middle of the month, so that means that I have the final alternative income numbers for last month. It can take awhile for the tenants to have their rent checks in and for us to have the mortgages paid.

May was the first month in a long time where I didn’t feel overwhelmed and overbooked. Although that wasn’t true for the beginning of the month. My wife had a week of work travel and we did a lot of cleaning for Mother’s Day.

The kids’ obsession with Pokemon continues in its 11th month. I continue to leverage that to teach them (and myself) new things. For example, they wanted to learn Japanese, and they got a 20-day streak on Duolingo. We’re taking a little break and getting back to our normal bedtime reading of books. I’m still moving forward myself with Japanese with a streak of 40+ days. I’m doing the smallest amount possible each night, so I’m not good at all, but I find it uplifting to see the consistent growth from the steady habit.

I’ll mix in some pictures from the month throughout the financial update, because some people find numbers boring. (But not you or you wouldn’t be here!)

The last month I reported, April, had us sitting almost all the dogs imaginable. May was a 33% drop-off, but it was still a top month for the year. That’s because Memorial Day is a big travel day and holiday pay kicks in.

Blogging income for May was significantly below average. For some reason, advertisers stayed away. Maybe it’s the start of the blogging summer slowdown. 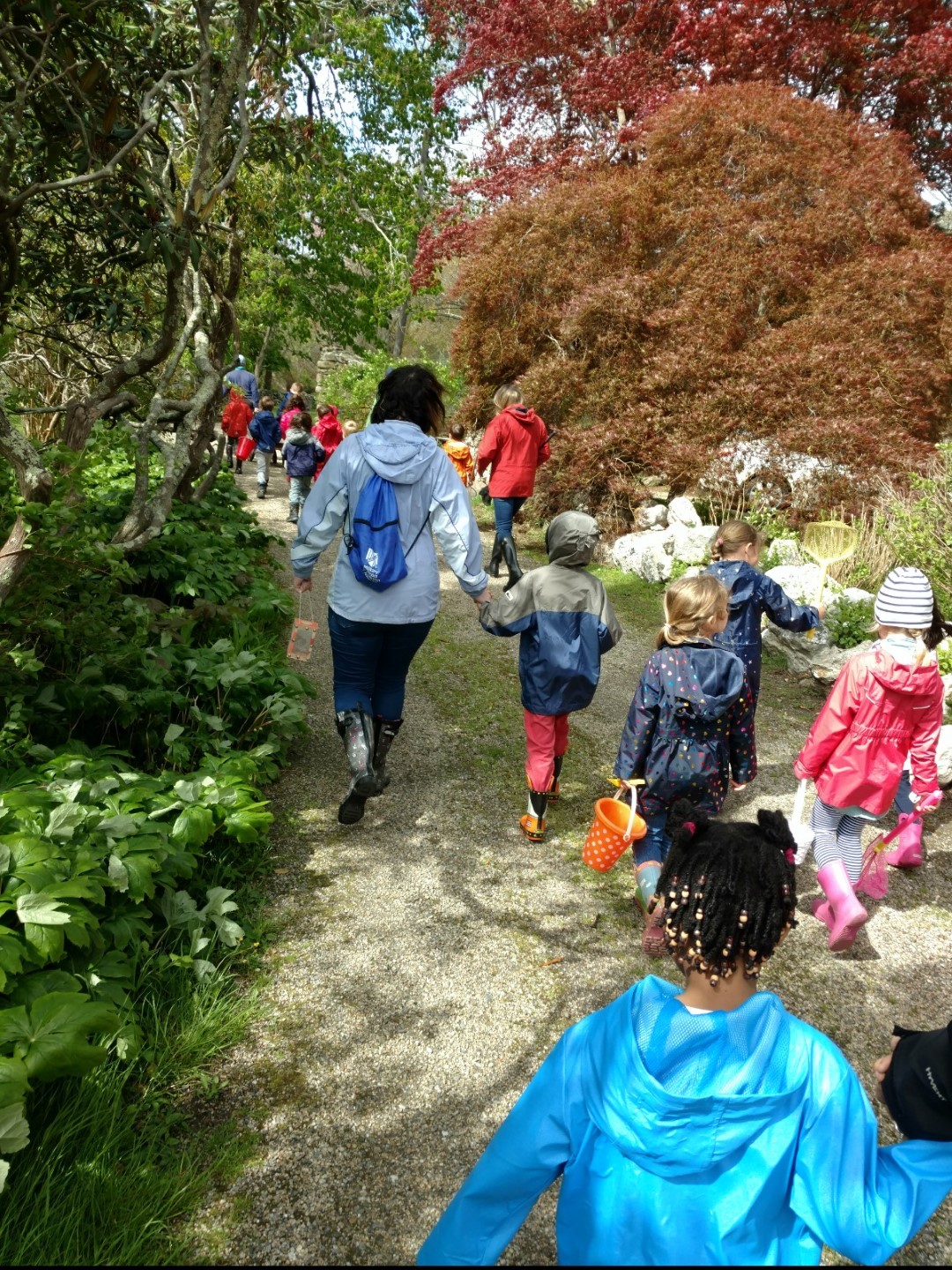 Our son’s Kindergarten class had a field trip to a pond to investigate the life in that habitat. Parents were invited and my wife and I made up around a quarter of those attendees.

I knew I wasn’t going to keep up with the record-breaking April performance, but I’ll take an above average number. It’s still moving in the right direction. 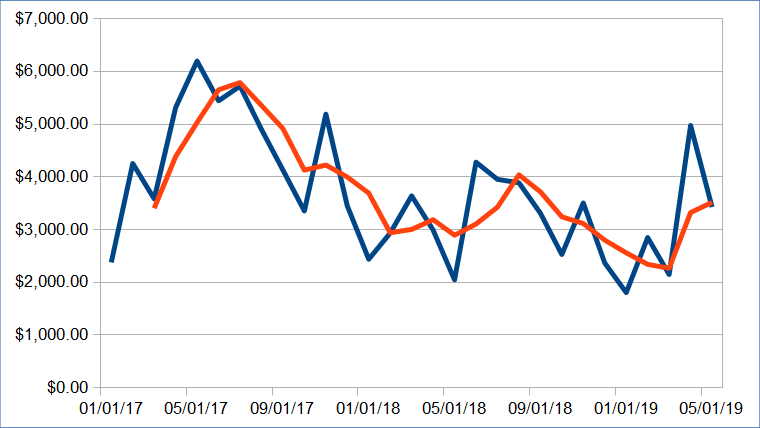 Zillow said our rental properties were worth 1% more than last month. As with every month, we paid off a couple thousand of mortgage debt. It is boring, but in a great, slow and steady way.

We now have 55.93% of the equity in our properties with an estimated combined rent of $3,325. The rent number is after insurance, property taxes, and condo fees. That’s so we can estimate what we’d really be taking home after expenses. 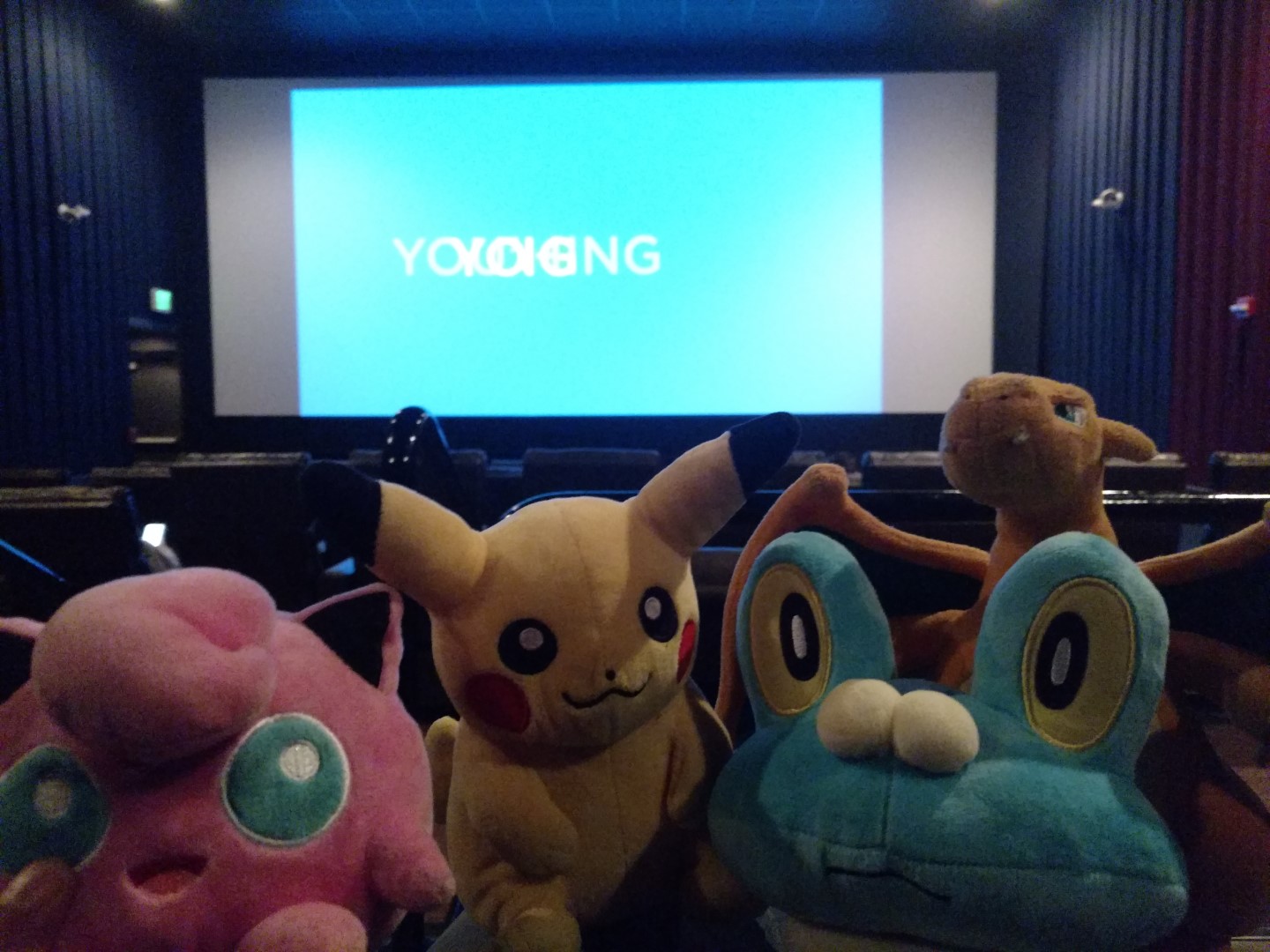 A year ago, I had to ask on Twitter what Pokemon was. This month, we went to the premier of Detective Pikachu and brought some friends. I’ve been a fan of the Marvel Cinematic Universe for a long time, but, in my opinion, Detective Pikachu was an objectively better movie than Endgame.

In the previous report, the rental property income was $1,835. This number always moves slowly as it only changes if one of two things happen: 1) The properties go up in value. 2) We charge more for rent. Later this year, we should be able to raise the rents a bit. 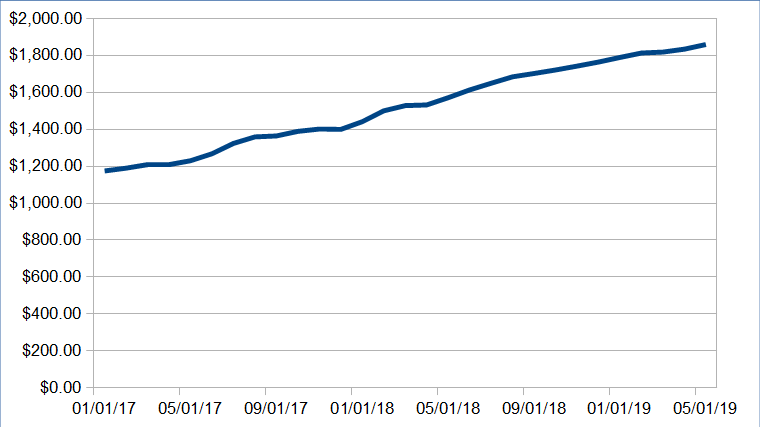 For the third straight month May did little for our portfolios. For the April report, I took the numbers a little late on May 11th due to the beginning of the month rush. That was after Trump escalated the trade war with China. A few days ago, when it was time to get the numbers for all of May, the Tariff Man was back with Mexico in his sights. 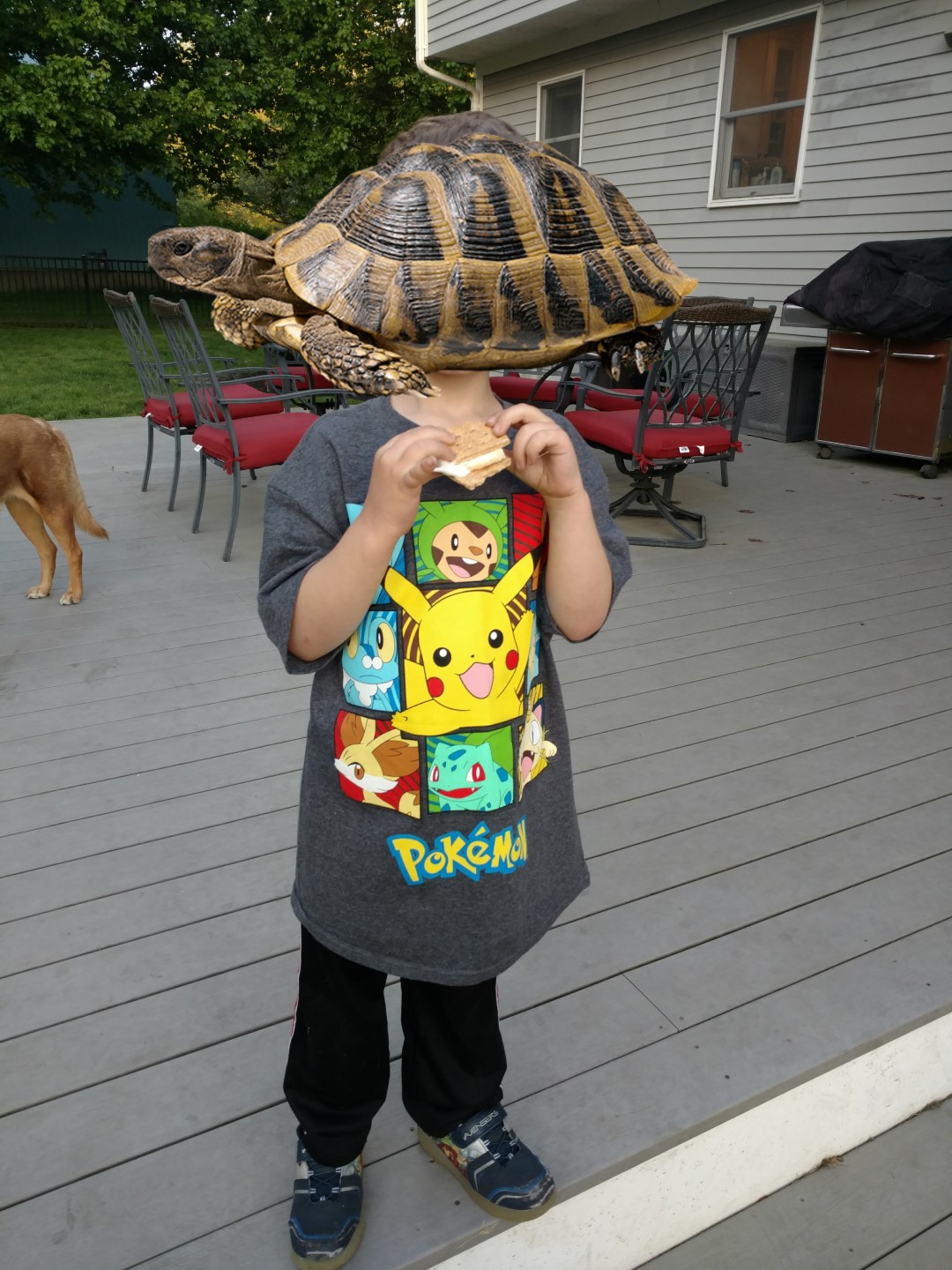 Homemade S’mores aren’t just delicious. They are a reminder that some of life’s best little pleasures can be very cheap. (There’s no hiding the Pokemon shirt. And the shoes are “more comfortable” on the wrong feet.)

These incidents temporarily scared the market, but the timing happened to be when I was taking the numbers. Just how boring were the numbers this month? Take a look: 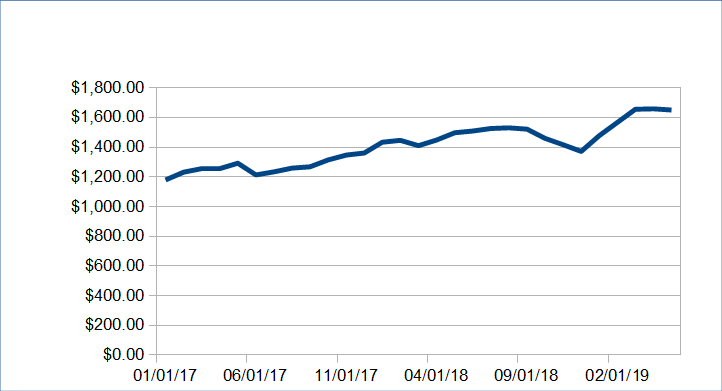 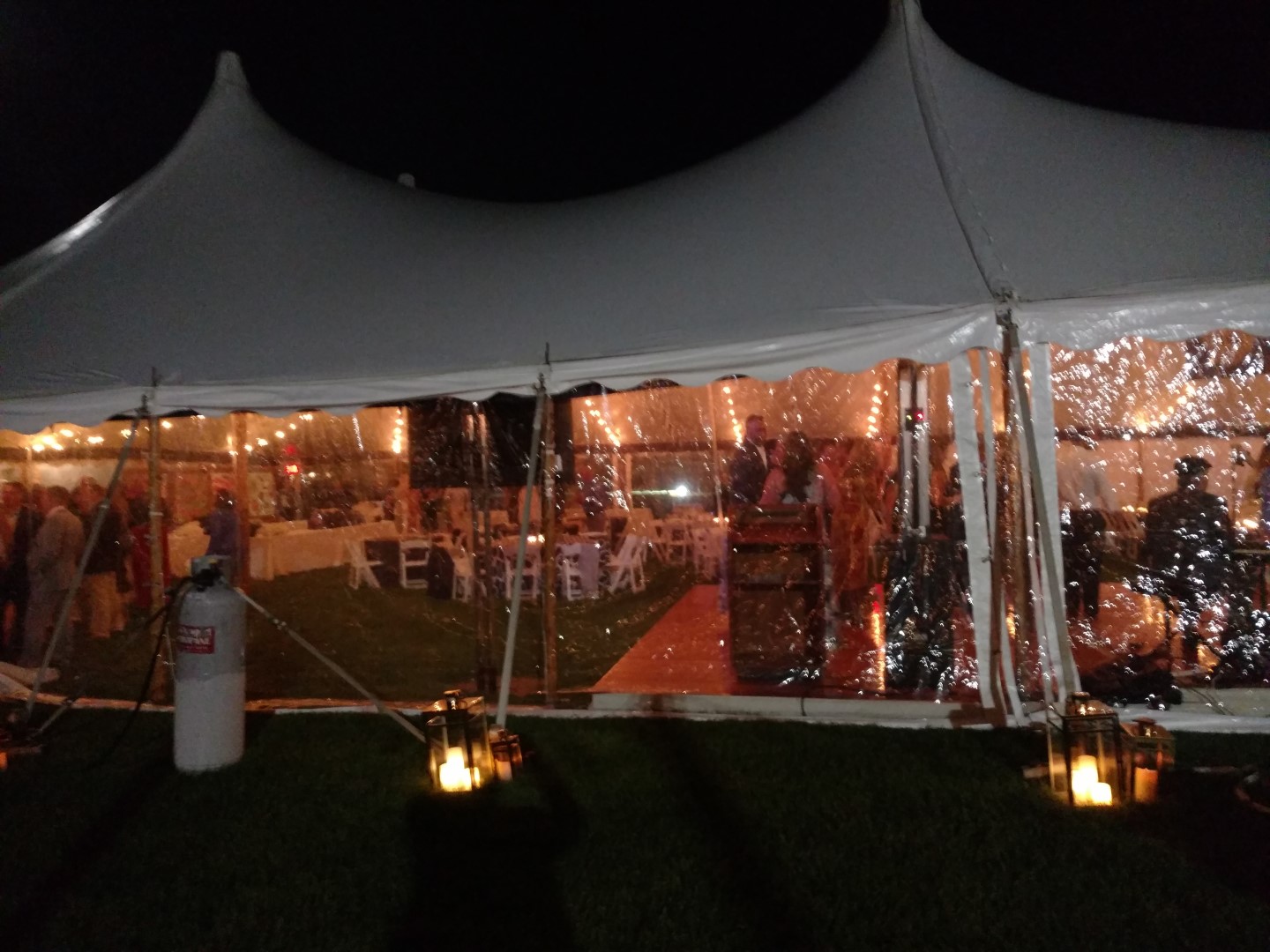 The kids’ school had a huge gala outside in a tent. I thought it was incredible, but my wife thought it was just “meh.” It was great to talk with the teachers (and even other parents) in a much more relaxed setting.

Having both types of income working together for us is great. The diversification gives me great confidence that we’ll be better prepared than most people in the case of an unfortunate event. We’ll still likely get rent checks if there are futher tariff fears. We’ll still get dividend checks if a tenant is late paying one month.

Last month it was $3,511, so it’s up $17. Last month was an all-time high, so we continue breaking records. It has grown from a combined $2,354 in January 2017. Since then, this has gone from an estimated annual income of $28,252 from these two sources to $42,128. It’s worth noting that, once again, these are fudged numbers that aren’t “real” yet. However, I’m looking forward to 9 years from now when the mortgages on the investment properties are paid off. Add in stock market growth (of a conservative 4%) and this number could reach $85K/year or more. 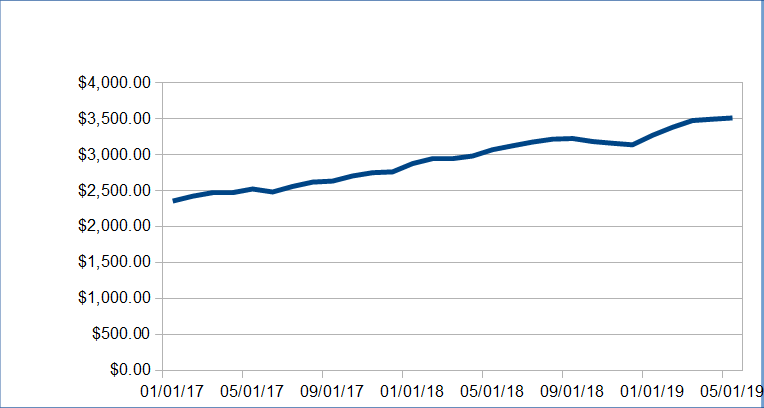 That largely hypothetical annual income for writing on a blog, taking care of dogs, and investments feels a little like a dream. In the long term, that 100K+ would be a lot more income than we’d need. Here’s what our expenses for the next 45 years looks like. 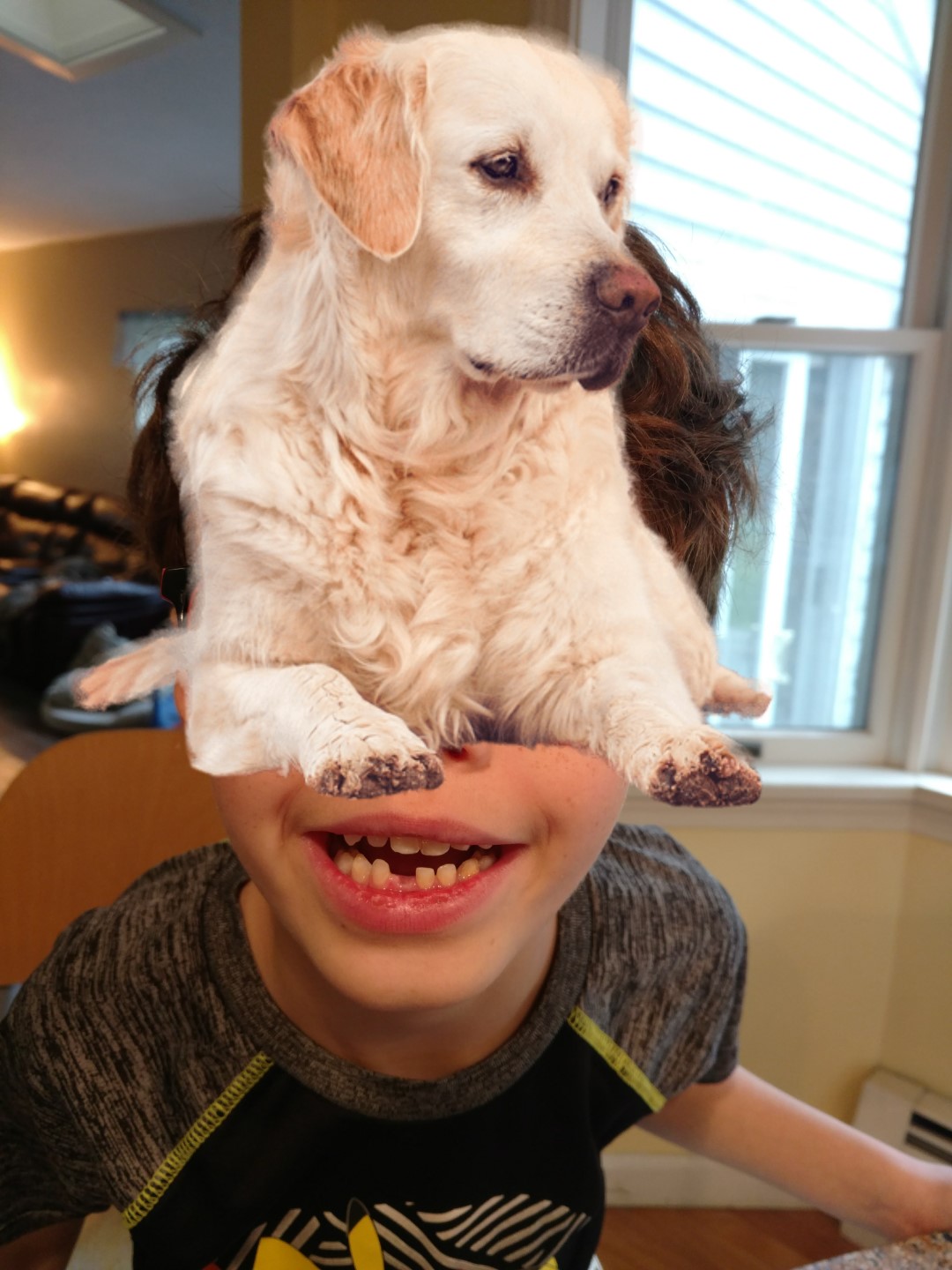 We had our first visit from the tooth fairy this month. It went so well that we had another visit in early June. (Yes that’s Pikachu’s ears on the shirt.) 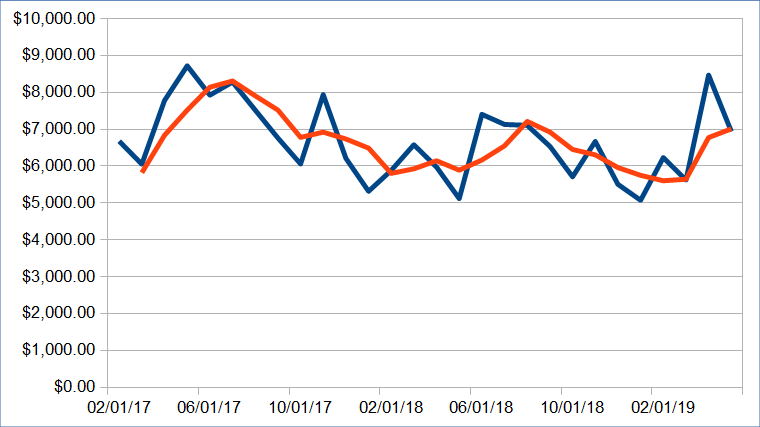 I use Personal Capital to track my net worth and it makes everything easy. It’s free and you should give it a try. For full disclosure, I might make a few dollars if you do. For more full disclosure, I haven’t made a dollar from that suggestion this year.

The stock market was down, but it was just a small amount. Our real estate, including our own home, was up around 1% across the board. Our net worth overall went up 0.73%. For the year it’s up 21.63%, a large percentage of that was based on a website sale that I had at the beginning of the year.

How was your May? Let me know in the comments.