It’s the middle of the month, so that means that I have the final alternative income numbers for last month. It always takes awhile for the tenants to have their rent checks in and for us to get all the money moved.

April was another busy month for us. In addition to all the financial stuff below, there was a lot of family stuff going on. The kids are still taking swim classes and one moved up a level. We reached a crucial milestone where if they fell into a pool they wouldn’t drown (I think). The older, 6-year old was one of the stars of a school play, so we’ll probably be investing in children theater classes in a few months. The younger, 5-year old seems to have acting in his blood, but he’ll have to wait until he’s 7.

They accidentally got renewed in a cooking class after school, so we just rolled with that. It’s great money-saving skill to learn at a young age. However, it means that we have to miss the local chess club. In a text document somewhere I have some research into Android apps that may fill the gap as long as they are still interested.

Found a bunch of a games at a yard sale. Picked out 8 classics. The seller wanted a dollar a game. I offered a $20 and she was so excited. pic.twitter.com/15pn17PJew

Both kids asked me if they could learn Japanese so they can work at The Pokemon Company someday. We’ve got more than 20 straight days on Duolingo together. We’re also learning French because their school starts that in Kindergarten. We’ll have to plan a trip to Canada in a little bit.

I’ll mix in some pictures throughout the financial update, because numbers can be boring.

This summed up our dog sitting in April:

Sometimes it felt like we had 101 dogs during the month. It was just a tremendous month where we were at our limit for a little while.

Blogging income for April was far above average as well. For some reason, advertisers were coming out of the woodwork and business was great.

That’s the best these categories have done since 2017 and it’s nearly double what I’ve been averaging for a long time. The only downside is that I don’t think I discovered a secret that could lead to sustained success. 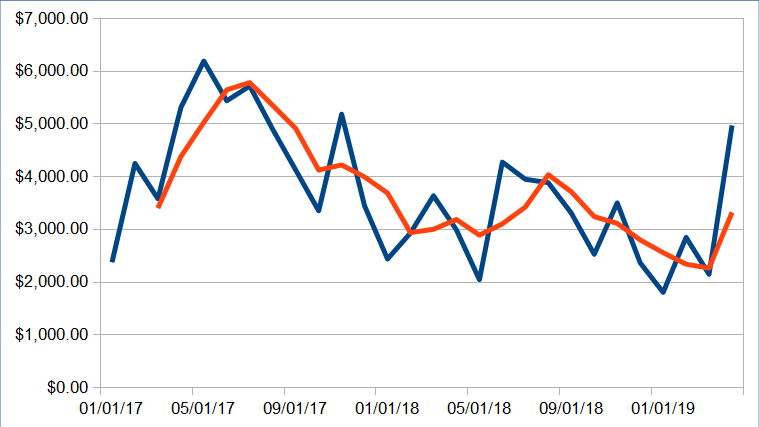 Zillow kept the value of our rental properties about the same. Like every month, we paid off a couple thousand of mortgage debt. It was boring, but in a great, slow and steady way.

We now have 55.20% of the equity in our properties with an estimated combined rent of $3,325. The rent number is after insurance, property taxes, and condo fees. That’s so we can estimate what we’d really be taking home after expenses.

In the previous report, the rental property income was $1,819. This number always moves slowly. This number only changes if one of two things happen: 1) The properties go up in value. 2) We charge more for rent. Later this year, we should be able to raise the rents a bit. 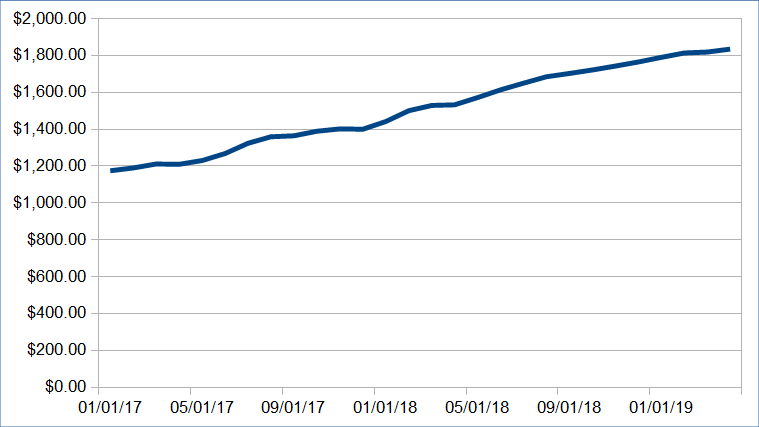 April did nothing for our portfolios. The stock market soared in April, but I didn’t get to take the numbers until May 11 – after Trump escalated the trade war with China causing the markets to give up their gains

Last month, it was $1,656, so we gained $3 of theoretical monthly money from theoretical dividends. Earlier in the month, I think this would have been $1,700 or close to it. This is an all-time new record for us, but obviously not exciting. 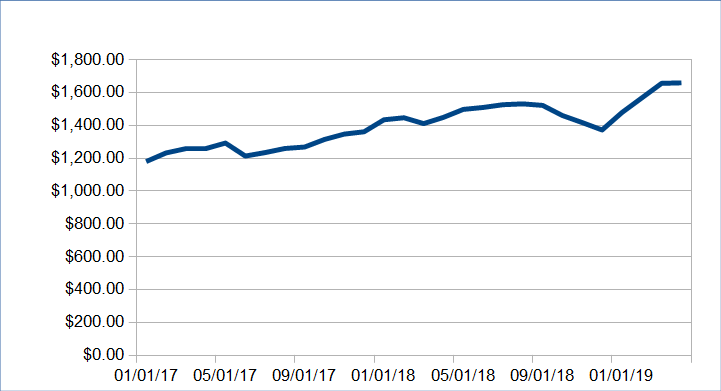 Having both types of income working together for us is great. The diversification gives me great confidence that we’ll be better prepared than most people in the case of an unfortunate event. We’ll still likely get rent checks if there’s a brief trade war in China. We’ll still get dividend checks if a tenant is late paying one month.

Last month it was $3,475, so it’s up $19. Last month was an all-time high, so we continue breaking records. It has grown from a combined $2,354 in January 2017. Since then, this has gone from an estimated annual income of $28,252 from these two sources to $41,933. It’s worth noting that, once again, these are fudged numbers that aren’t “real” yet. However, I’m looking forward to 9 years from now when the mortgages on the investment properties are paid off. Add in stock market growth (of a conservative 4%) and this number could reach $85K/year or more. 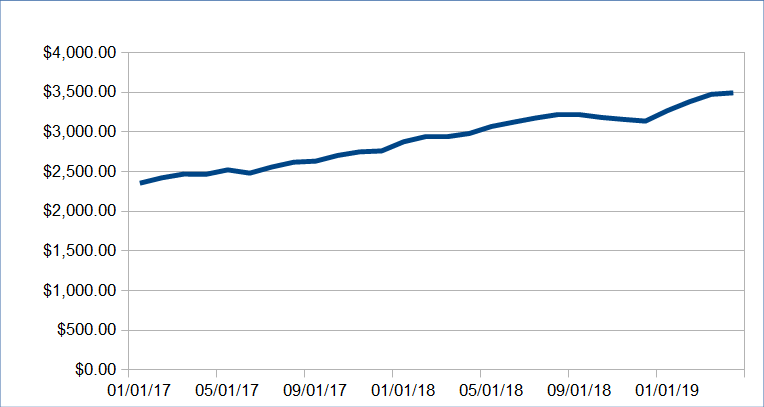 That largely hypothetical annual income for writing on a blog, and taking care of dogs, and investments feels a little like a dream. In the long term, that 100K+ would be a lot more income than we’d need. Here’s what our expenses for the next 45 years looks like. 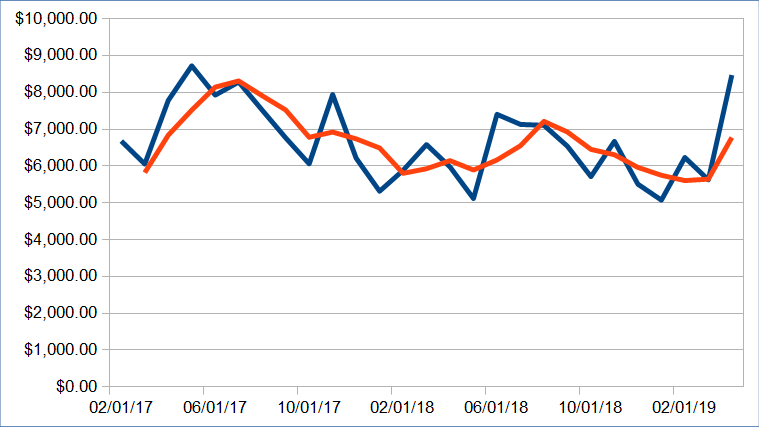 My net worth updates aren’t very exciting as I don’t share the exact numbers. That’s why it’s little more than a footnote here.

I use Personal Capital to track my net worth and it makes everything easy. It’s free and you should give it a try. For full disclosure, I might make a few dollars if you do.

With the stock market not doing much and Zillow valuing our rental properties the same, there wasn’t much to impact our net worth. However, a neighbor sold their home and I think it triggered to Zillow to update their math as the value of our home went up. Our total net worth went up 0.95%. For the year it’s up 20.76%, a large percentage of that was based on a website sale that I had at the beginning of the year.

There’s a big wild card in calculating our net worth. Now that my wife’s pension is vested, it’s reasonable to ask Should I Include a Pension in Our Net Worth?. I decided that it does make sense to do it. Later this month, I’m planning to write how to make such a calculation. It’s a big pension that’s potentially worth $2 million or more.

How was your April? Let me know in the comments.