There’s so much politics in the news nowadays that some really important stories are falling under the radar. For example, the NXIVM alleged “sex cult” MLM involving celebrity actresses and heiresses is getting very little attention. That particular link is just the latest news that came out yesterday. Stuff like that has been streaming out for a year or two now.

For a long time, I covered MLM scams as a side project here. MLMs fit well within personal finance territory because they bill themselves as a entrepreneurial opportunity to make extra income. They even fall within the area of FIRE (Financial Independence/Retire Early) because they pitch the idea of working for yourself with just a few hours of week. 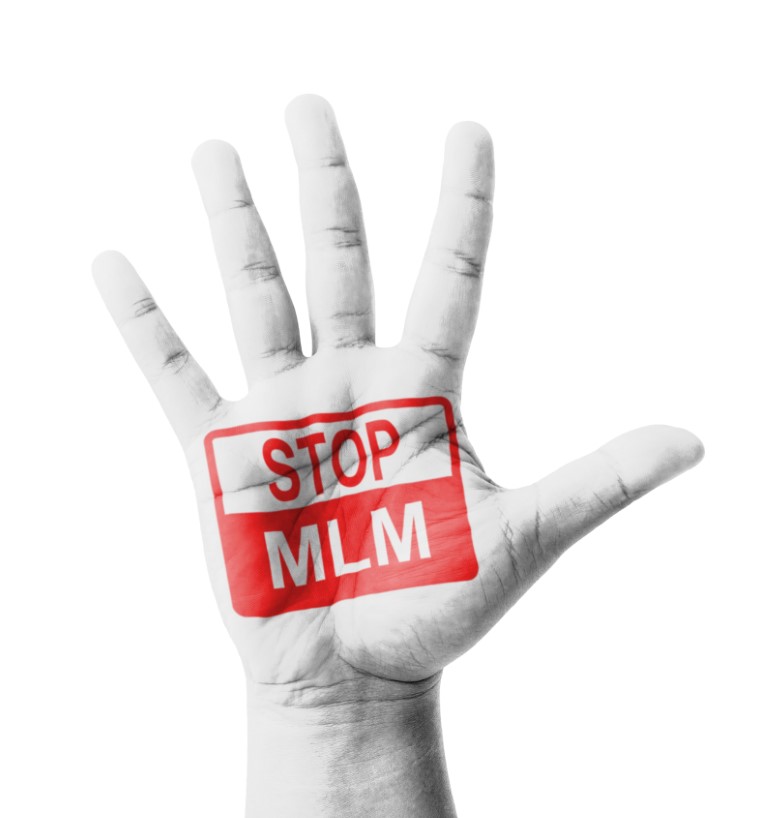 Of course those claims are too good to be true and the real “opportunity” is to trap a dozen others in a money-losing pit to boost yourself out. Not only that, but MLMs are NOT businesses since they avoid many core basics of business.

After reviewing a few dozen MLMs on the site, I realized there was a pattern. Each one would say that their MLM is different or better, but except for minor inconsequential details, they were the same. In fact, there videos like this one (not made by me), that covers many of the basic ingredients:

Of course John Oliver does the job with a lot more humor making it hilarious to watch:

Because each MLM seemed so similar, I decided to posit a theory… that every MLM is a scam. I realized that this would be practically impossible to prove for two reasons:

Despite this, no one has been able to meet the challenge of showing me a legitimate MLM. A few have tried with hilarious failings such as the ViSalus scam.

However, what I wanted to show with that article is how they all could be scams. My idea was based on the fact that MLMs contribute fiercely among themselves for distributors. This is done in secret much of the time, but it leaks out through lawsuits that companies poach other distributors. This is almost always done by targetting someone high up and getting their entire recruited pyramid of people – sometimes referred to as a downline in MLM.

My theory was that a legitimate company basing commissions on sales and not recruiting is at a competitive disadvantage. It’s an impossible sales pitch to tell someone with a big pyramid of recruits that they have to make money selling product by knocking on doors or setting up yard sales. Thus, I presumed the reason why no one can name a legitimate MLM company is because one doesn’t exist because it can’t exist in the competitive environment. Specifically:

If you are going to try to run a legitimate MLM organization, how can you draw people to your business and compete in an environment of illegal pyramid schemes? You can’t. If everyone is allowed to put a pile of aces up their sleeves in a poker tournament and you play an honest game, you aren’t going to be in the tournament very long.

Imagine if there were no drug testing in the NFL. It would be extraordinarily difficult for a clean linebacker to compete for a job against a group that are extensive steroids users.

I’ve often said that if any MLM wants to prove it is a legitimate company they can simply switch to single-level commission sales. Take the recruiting out of it. If your commissions structure is good enough, you don’t need to pay people to recruit people to it. There are lots of people who make a very good living on affiliate sales. If you’ve read personal finance blogs, you’ve seen them for hosting or financial management software*. Those programs are free to join and there’s no recruiting to them.

The big news is that Advocare has decided to do what seems to be exactly what I proposed… remove the pyramid scheme aspect of their compensation plan.

I applaud this decision because my analysis lead me to have the opinion that AdvoCare was a scam.

At the end of last week, Advocare released the official statement that it “gave notice to its more than 100,000 Distributors… [that] AdvoCare will revise the business model to a single-level distribution model, paying compensation based solely on sales to direct customers.”

The reason for this change isn’t that Advocare decided it was best to get away from what appeared to be a pyramid scheme. Instead it cited that it has been in “confidential talks with the Federal Trade Commission about the AdvoCare business model and how AdvoCare compensates its Distributors.” The CEO futher declared that “Based on recent discussions, it became clear that this change is the only viable option.”

While it would be great to have all the details of those discussions, it sounds to me that the FTC has finally started to regulate the MLM industry and is applying the same test I suggested.

It’s also important to note that there’s a federal lawsuit that alleges AdvoCare is a pyramid scheme. The suit uses AdvoCare’s own numbers to show that only 2000 of the 600,000 distributors make more than a minimum wage income. So you have about 0.33% (1 in 300) of doing better than any minimum wage job. So maybe it’s the lawsuit that is making things difficult for AdvoCare?

In the past when an MLM aspect has been terminated a company has become a shell of itself. The FTC specifically detailed the loss of business that Burnlounge experienced. The FTC similarly brought Vemma’s scam to an end by forcing it focus on sales and not recruiting.

Interestingly, a bunch of MLM people left one MLM to make another MLM called Yevo. Before that company got too far along with their $5 a serving oatmeal, they switched away from the MLM structure. I had received an email that the FTC was cracking on them, but I couldn’t verify its accuracy, despite it making the most logical sense to me. I don’t think the company is still in business.

Like the others, $40 juice or $5 oatmeal doesn’t seem to sell without a pyramid recruiting “business” opportunity.

There are some websites that cover MLM in detail and give additional commentary such as this article. Many MLM distributors visit and comment freely. I don’t want to promote some of them, because I believe they profit by promoting the scams as a regular business. However, I will say that most of the discussion has some very UPSET distributors.

On one hand, it’s hard to blame them. They’ve been told that building a recruited pyramid is a good, legal business. Now they are being told that they’ll have actually sell products themselves instead of the recruiting.

On the other hand, if they had been doing selling products instead of pyramid recruiting there’s no change. There’s nothing to be upset about.

It would be really interesting if AdvoCare was a publicly traded company with earnings that we could review. We might never hear how this impacted their business. My guess is that you’ll see dramatically lower cost products that can compete on their merits. Usually, MLM products are overpriced, because they’re used as an admission ticket to the pyramid recruiting building scheme.

It’s also a reminder that it’s a bad idea to attempt to build a “business” on recruiting downlines or “teams” of recruiters. Not only are the odds of success extremely bad, but any kind of “success” means you put a bunch of others in a financial hole. And sometimes you wake up one morning and find that you never really had a business anyway.

For more analysis of MLMs I’ve covered in the past see:

* I have affiliate links for personal finance management software and blog hosting too, but I rarely include them in articles.