Today, we have another post from writer Kosmo… influenced by a killer.

My birthday is coming up later this month.  My wife recently asked me what I wanted.  Most years, I don’t have a good answer.  I pre-order Kindle versions of the books I want, and I generally don’t accumulate a lot of “stuff”.

Why am I beginning a stamp collection just as I approach my 45th birthday?  Well, a killer made me do it. 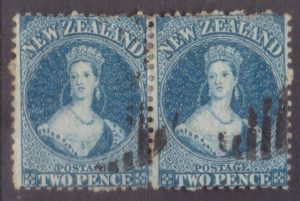 My favorite writer is Lawrence Block.  I’ve written several articles about his works over the years.  If you like mysteries, you’ll probably find a Block series that you like.  The killer who stoked my philatelic interests is a man named Keller, the subject of a five book series.  Keller is a hit man.  He travels around the country, killing people who need to be killed.  When he finishes the job, he ends up with a bunch of cash.  You can’t deposit a lot of cash without having the bank file a form 8300 with the IRS.  Nor can you structure your deposits in such a way to avoid detection.  In fact, making five deposits of $9500 each will raise more eyebrows than a single $47,500 transaction.

So, what’s a hit man to do with all this cash?  He plows it into stamps.  They sit in albums, slowly appreciating in value (although Keller is quick to point out that it’s difficult to recover the purchase price very quickly, due to dealer markup).  Block tends to weave a lot of actual knowledge into his books (particularly the Keller and Tanner series).  So I was able to pick up the basics of collecting from Keller.

Block also wrote articles for Linn’s Stamp News.  Those were compiled into a book called Generally Speaking.  I read it when it initially came out, despite having no interest in actually collecting at that time.  The book was recently updated, so if you’re interested in the hobby and haven’t read it, this is a good time to read it.

But enough with the free advertising for my favorite author.  What do I hope to get out of stamp collecting?

It’s certainly not a profit motive.  While Keller can invest in high dollar items such as Martinique 2 and Martinique 17, I’m going to be buying considerably lower dollar items, such as this lovely set from the Ross dependency.  (What’s the Ross Dependency?  It’s the section of Antarctica that belongs to New Zealand).  I’m doing it purely for the enjoyment.  I’ll periodically spend small sums of money and expect the collection to never be particularly valuable.

Speaking of money, there are a lot of things you can buy when you’re getting started in the hobby.

Before you start just buy stamps randomly, you’ll want to figure out what you want to collect.  This may be a particular country or date range (worldwide pre-1940 is a common specialty) or a topical subset, such as stamps that feature fish.

My primary focus will be on New Zealand, pre-1970.  In recent years, I have adopted New Zealand as a country of interest.  (Executive summary: I wanted to bond with Indian co-workers over cricket.  I somewhat randomly picked New Zealand as my favorite team and got hooked).  It seems like production of stamps really proliferated after about 1970, and I don’t really care for a lot of the newer stamps.  In addition to New Zealand itself, there’s also the Realm of New Zealand –  Ross Dependency (in Antarctica), Tokelau, Cook Islands, and Niue.  So there’s plenty for me to collect without going beyond New Zealand.  If I do branch out further, it will likely be into the non-Australian portions of Oceania.

I’ll also have a few topical subsets, just for fun.  I’ll collect baseball, cricket (the sport), dinosaurs, tigers, and elephants.  I’ll probably also delve into covers a bit.  There are some items from the Ross Dependency that have postmarks from the actual location in Antarctica, which seems pretty cool to me.

How many philatelists are in our midst?  What have you found most enjoyable about the hobby?  What advice to you have for new collectors?  And, if you don’t mind sharing, how much money have you sunk into stamps over the years?